Newswire
Calendar
Features
Home
Donate
From the Open-Publishing Calendar
From the Open-Publishing Newswire
Indybay Feature
Publish to Newswire
Add an Event
Related Categories: Santa Cruz Indymedia | Police State & Prisons
Two Men Cited Downtown on Sunday - One for His Dog, One for ?
by Alex Darocy (alex [at] alexdarocy.com)
Wednesday Aug 31st, 2011 8:34 PM
On Sunday two men were cited in Downtown Santa Cruz by an officer with the SCPD. Less than one week after the dog ban was lifted for the trial period, one of the men received a dog-related citation. During the same encounter with authorities, his friend, while playing music, received a citation for panhandling. 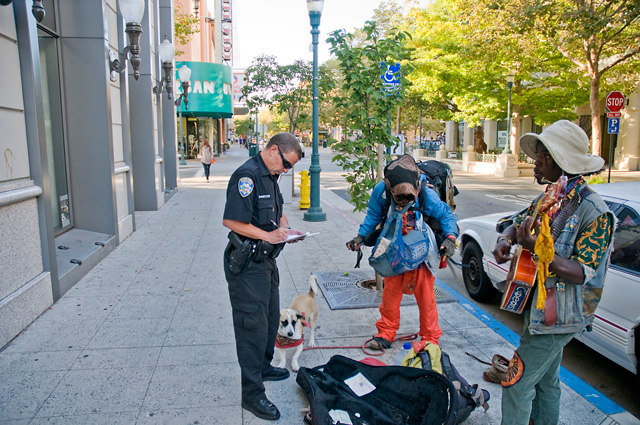 On August 28, 2011, while walking on Pacific Avenue in Downtown Santa Cruz, taking photos, I noticed a small group of musicians playing in front of the Rit (the E. C. Rittenhouse Building, which is located at the corner of Pacific Ave. and Church St.). They played in different configurations for 20 minutes or so. Almost all of them had dreadlocks and it was a mixed ethnicity group of colorfully dressed people. I walked further downtown and then back near that spot again and noticed the group was down to two of the people, and standing in front of them was a SCPD officer writing a citation. I started taking photos about 10 feet away from the officer, and after about four shots, the officer took photos of me. I asked them if they were being ticketed for the dog not wearing the proper leash, but the guitar player wasn't sure exactly what the dog citation was about. I can't remember how it was apparent that they were both being ticketed, but the first ticket written was the dog ticket, and while the officer was writing the guitar player the ticket, we both asked his friend what he had been cited for and he (the friend) was only semi-responsive to us. I asked the police officer if he was being cited for the dog having the wrong leash and the officer said he couldn't talk about the citation he wrote for someone else, I apologized, and he said it was ok in what I would call a nice tone.
The guitar player at this time told me he thought the police were harassing him for playing music. I walked on at this point, and when I looked back they were headed towards the metro center. I hesitated, then ran and caught up to them at the Santa Cruz Metro Center just as their bus pulled up. The guitar player told me about when he had first played at the spot in front of the Rit, and that a SCPD officer had told him that if, "he moved just four feet down the street he would be 'golden.'" He also told me that he had a previous encounter with the officer (who had just written him the citation) where the officer had made it clear that the location where the guitar player was playing was fine (which was that spot in the photo in front of the Rit). The guitar player told me these two stories in the context of him feeling harassed by the multiple communications with SCPD officers about playing music. He also said that he thought this last experience with the SCPD was harassment and 'fake' because the officer did not call in his information when writing the citation, and that the citation for 'playing music' was motivated when he asked for the officer's badge number during the writing of the dog citation. He said that they were planning on leaving town and that this was the final push. During the whole event, he told me several times he thought he was being cited for playing music. I asked to see the citations that he and his friend received. The guitar player was 21, his address was listed as "transient", and he was cited for "Panhandling within 50 feet of a change machine." His friend showed me his citation, which read "Dog License required." The friend told me in a very abstract manner that he was actually a Hawaiian priest, and that nothing that had just happened, or that the police officer had said, mattered in any way, though he did feel inconvenienced. They then boarded the SCM bus and left.
That is the full story as I witnessed it on August 28, 2011.
After inspecting the photo I took of the two men more closely, I found that a small written message is visible in the guitar player's case, "All we need is $1.25." 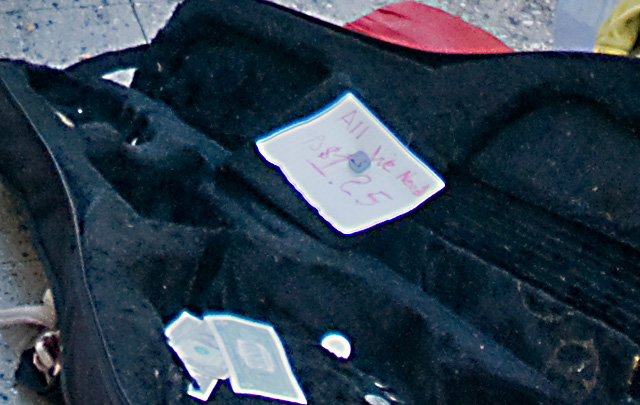 "All we need is $1.25"
Add Your Comments
LATEST COMMENTS ABOUT THIS ARTICLE
Listed below are the latest comments about this post.
These comments are submitted anonymously by website visitors.