The next No Justice No BART action is scheduled for Thursday, September 8, at the Powell Street Station, beginning at 4:30 PM. Stay tuned for more information. More details will be posted shortly, and there will be a press conference next Monday (9/5) to let everyone know what to expect from this action.

The plan for this action was developed by a group of folks who come from different communities and organizing initiatives, it is not just a "No Justice No BART" production. Our groups intend to “protest” outside of the fare gates, inside the Powell BART station (you will not need a ticket to join us). We have made this strategy public and announced the action well ahead of time, to preempt some of the disingenuous media furor around “inconvenienced” passengers and to create a “Catch-22” for BART.

Since BART has been very clear in insisting that we should “protest outside the fare gates”, they will have a choice. If we mobilize enough people, in order to keep riders moving into and out of the station, they will have to open the emergency exits and let folks ride for free, just as they do for all sorts of big sporting events, antiwar protests, and even past No Justice No BART protests.

On the other hand, if BART police decide to close the station, or otherwise interfere with or attack our protest outside the fare gates, we have made it clear that we are prepared to respond by moving the protest to other stations and/or inside the fare gates. If they choose this course of action, BART will be demonstrating that their “free speech zones” are bullshit, and they will be taking responsibility for causing a major disruption to their passengers.

We view this action as a tactical assay to see if we can protest in a way that inconveniences BART administrators but not BART passengers. At the same time, our overall strategy has not changed and we affirm our rationale for bringing protest inside BART stations and trains. Any blame for any inconvenience caused by such protests should be placed on the spineless and amoral BART Board of “Directors”, and the cops they permit to harass, brutalize, and murder BART passengers. Anyone complaining about inconvenienced commuters should be politely reminded that "police murder is inconvenient".

PS: There will be roles for people on the platforms as well as above ground and we will maintain a presence at multiple BART stations. Anyone interested in helping organize should email nojusticenobart [at] gmail.com.
END_OF_DOCUMENT_TOKEN_TO_BE_REPLACED
Added to the calendar on Wed, Aug 31, 2011 2:00PM
Related Categories: San Francisco | Police State & Prisons
§flier
by No Justice No BART 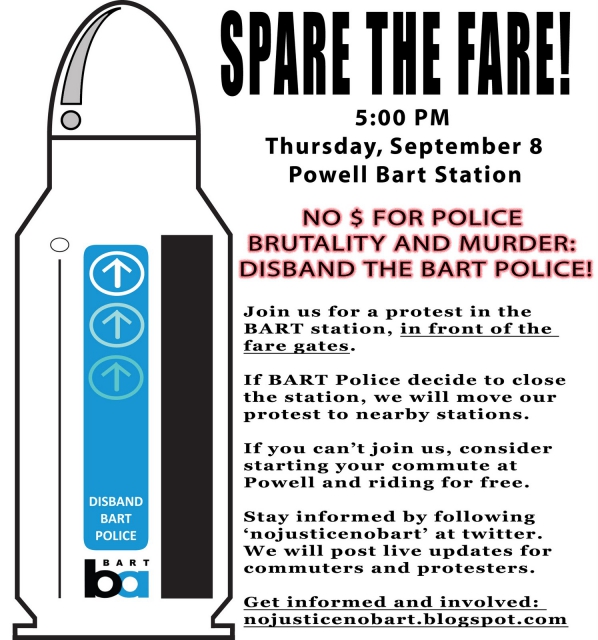 original image (1495x1600)
new ticket to bullets graphic
Add Your Comments
Latest Comments
Listed below are the latest comments about this post.
These comments are submitted anonymously by website visitors.
TITLE
AUTHOR
DATE
The Bacon sense us coming?
a
just saw
g. faulks
All Cops Are Bastards
(-A-)
No Justice No BART Press Conference - Monday, September 5th, 4:30pm
No Justice No BART
Support Independent Media
We are 100% volunteer and depend on your participation to sustain our efforts!