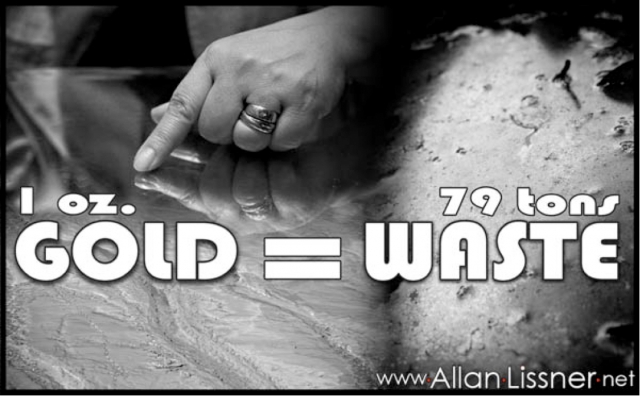 original image (1085x673)
With gold prices reaching a record high this month, ProtestBarrick – an all-volunteer campaign against the world's largest gold mining company – has decided to accept the new currency. Bitcoin is an electronic payment system that operates as a "decentralized digital currency", where information about every Bitcoin resides on every computer within the Bitcoin network. Much of Bitcoin's appeal is based in the fact that the number of Bitcoins produced in the world is limited by an open-source algorithm as opposed to the whims of a central government. Initially created in 2009, there are now over 6.5 million bitcoins in existence with a value of about $10 US each.

"We have seen currency insecurity lead to sky-rocketing gold prices, leading to the rapid destruction of indigenous and rural communities around the world,” stated Sakura Saunders, the co-founder and editor of ProtestBarrick.net. “Even in areas where human rights abuses are well-documented, gold mining is allowed to continue due to its huge profit margin. Now more than ever before, we need an alternative currency."

Since 2005, annual investment demand for gold has risen from 594.8 tonnes to a whopping 1,487 tonnes in 2010 – a 250% increase – according to the World Gold Council. This spike in demand has led to increased exploration, the exploitation of lower grade ore, and more coercive tactics being used against communities resisting this inherently destructive industry.

Just this summer, the body of Francisco Durán Ayala, an anti-mining activist in Cabañas, El Salvador was found with a single shot to the head. He is the fourth targeted assassination in the past two years in Cabañas after local activists were able to push Pacific Rim out of the area. Meanwhile, the Canadian gold miner is suing the state of El Salvador for hundreds of millions of dollars under the provisions of the Central America Free Trade Agreement (CAFTA), because El Salvador refused to grant mining extraction permits to the company.

The ProtestBarrick campaign is itself a strategy against the industry as a whole.

"We have over 750 articles about Barrick Gold, the world's largest and supposedly most 'socially responsible' gold mining company, doing bad things in over 10 different countries," explained Saunders. "The point is to show that this is not the case of a 'few bad apples', but that human rights abuses, corruption, and environmental devastation are in fact the status quo for gold mining all over the world."

Approximately 89% of gold annually is used for either jewelry or investment purposes. Meanwhile, basic human rights, such as the right to Free Prior and Informed Consent (FPIC), or the right for a community to say no to a mine, is not respected. Additionally, countries such as Canada, where the majority of mining companies are headquartered, have no laws to prevent their companies' human rights abuses abroad.

With almost 40% of gold supplied by recycled sources, the need for more gold mining has questionable social value, especially in light of the systemic issues related to the industry.

In turbulent economic times, gold's appeal to the investor centers on the fact that it's supply is limited and not subject to the political decisions of a country's leadership. Bitcoin presents the same appeal, while not causing abuses, rewarding corruption, promoting militarization and eroding indigenous rights around the world.
http://protestbarrick.net
§Gold has no social value
by Sakura Saunders Sunday Aug 28th, 2011 11:06 AM
Less than 11% of gold is used for anything other than jewelry or investment. Additionally, it is the most recycled metal on the planet. We could actually never mine the stuff again, but instead it is the most explored for mineral on the planet, bringing with it guaranteed environmental destruction. What's more, basic rights are not protected, such as Free Prior and Informed Consent, or the right to say no to mining "development" and most gold is mined on Indigenous lands (i.e. those with the least amount of political power within their nation-state.)
http://protestbarrick.net
Add Your Comments
LATEST COMMENTS ABOUT THIS ARTICLE
Listed below are the latest comments about this post.
These comments are submitted anonymously by website visitors.