Add an Event
Newswire
Calendar
Features
Home
Donate
From the Open-Publishing Calendar
From the Open-Publishing Newswire
Indybay Feature
Publish to Newswire
Add an Event
Related Categories: Peninsula | Media Activism & Independent Media
BART Protest in Menlo Park Addresses UK Privacy Issues
by Raging Grannies (info [at] raginggrannies.com)
Monday Aug 15th, 2011 3:53 PM
There is an important parallel with the proposed social network restrictions in the UK and what is going on in San Francisco. 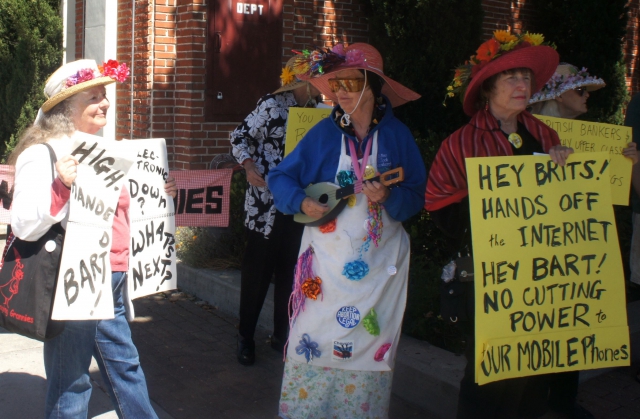 The Grannies held their protest outside the British Bankers Club, a conveniently located symbol of class warfare. After singing outside for heavy foot traffic, the Grannies took their demonstration into the club, talked to some of the customers (of whom there were very few) and interviewed with a corporate media outlet. Three Bay Area TV stations covered the demonstration.

The Grannies' song addressing the attempts to control protesters in both countries is below, under the last photo. It is sung to the tune of God Bless America and is titled "We Need the Internet". 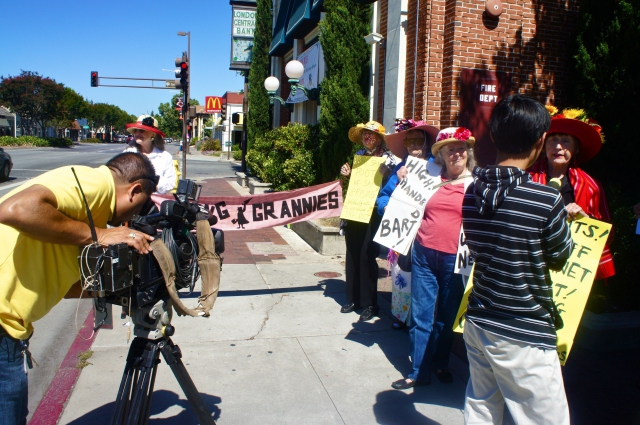 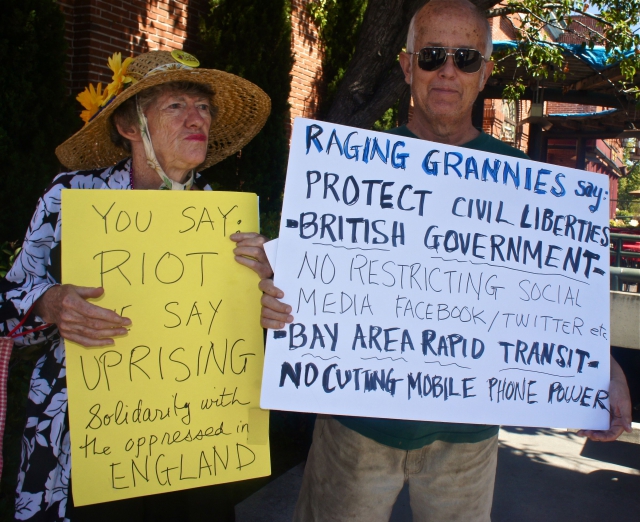 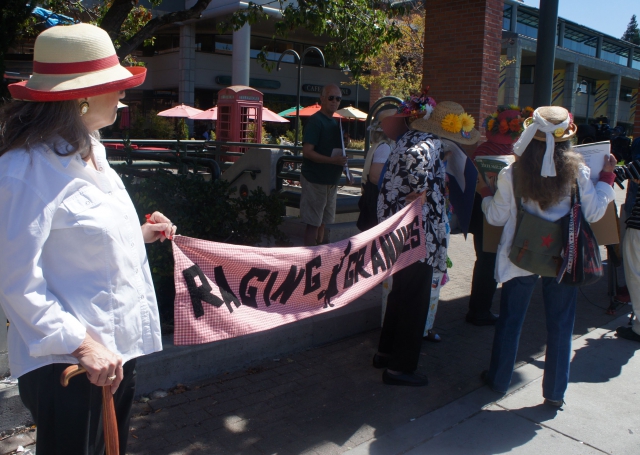 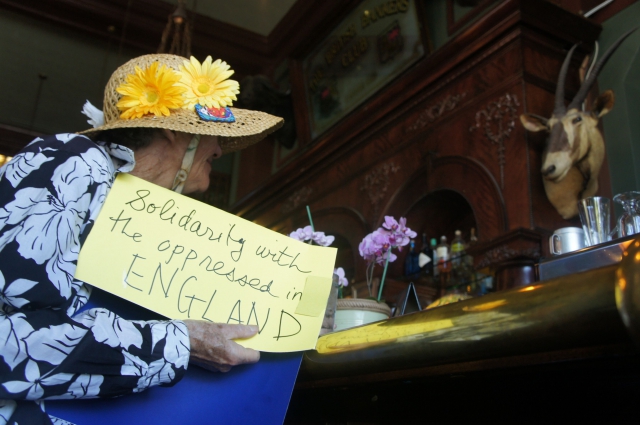 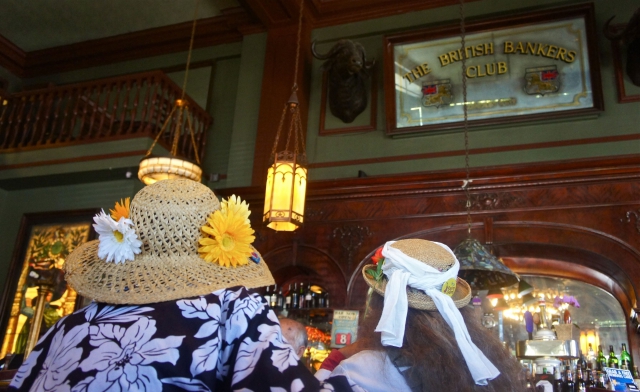 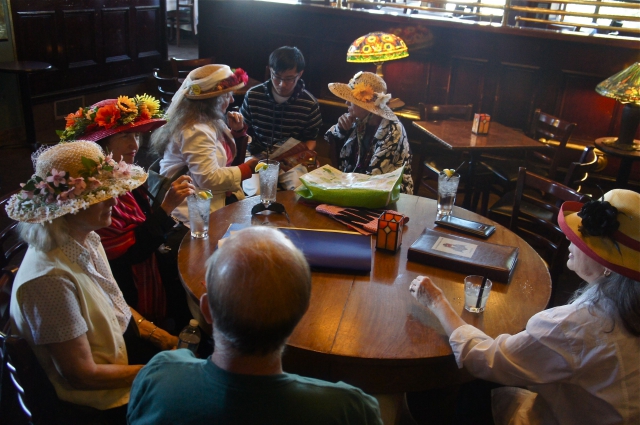 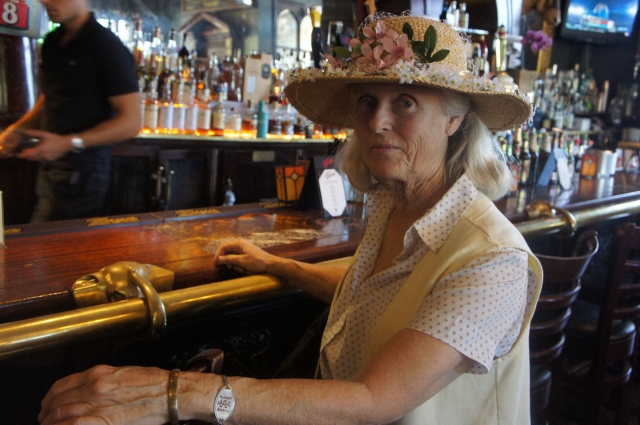 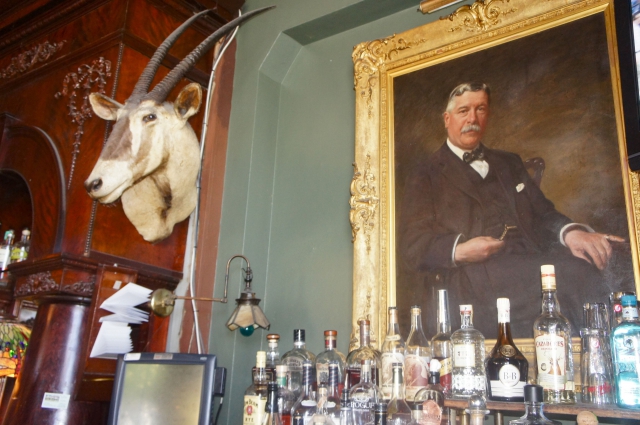 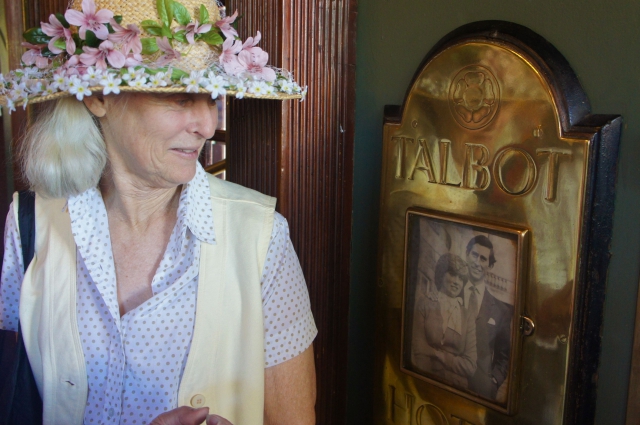 §Do the raging grannies know...
by Mike Holmes
Monday Aug 15th, 2011 4:09 PM
Do the raging grannies know that the British Bankers Club is a restaurant and bar and not an agency of the British government?
Add a Comment
§duh, of course they do
by ....
Monday Aug 15th, 2011 4:38 PM
If you read the post you'd see they call it a convenient "symbol" of class warfare.
Add a Comment
§Restaurant
by Mike Holmes
Monday Aug 15th, 2011 8:23 PM
It's not that hoity toity a restaurant. I've never been there, but the prices aren't that outrageous. It's a little more than I would normally pay, but it's certainly no Chez Panisse. But, it is just a restaurant so holding an anti-UK and anti-BART protest there does seem pretty stupid. This restaurant does not set policy. I hope you purchased something there and didn't try to shut them down. Now, if you're going to be protesting against Alice Waters let me know and I'll be there! She's a real "elite" that needs to be brought to earth!
Add a Comment
§It's in the name: British Bankers' Club
by Frances Griffin
Monday Aug 15th, 2011 9:27 PM
Eh, Mike. in case you did not notice, the name of the place is British Bankers' Club. Symbolic enough, in my book for a protest of oppression.
No reflection on the quality or price of their food and drinks was implied on any of the signs. No mention of blocking any doors, which is not something the Grannies do anyway.
Add a Comment
Support Independent Media
We are 100% volunteer and depend on your participation to sustain our efforts!