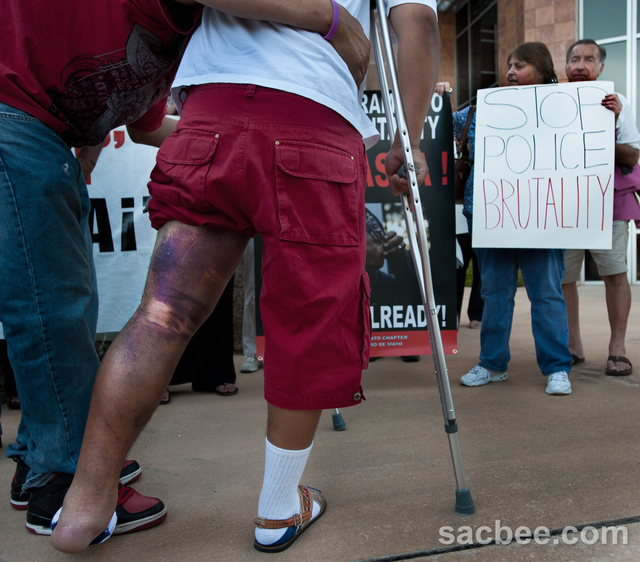 This week, protests took place in Stockton, Manteca, and Sacramento around incidents of police brutality and murder. All three demanded answers and the releasing of information by the police in regards to the cause of death of those in question.

On Tuesday 19th, family, friends, and community members marched over 70 strong on the Manteca City Council, demanding answers concerning the shooting death of Ernesto Duenez Jr. Also attending the march were several members of James Rivera and Rita Elias' family. Ernesto was killed by Manteca police earlier in July during a traffic stop. Family of Ernesto report that the officer responsible for the fatal shooting was placed back on the force only two weeks after the killing. They demanded that the name of the officer be released as well as video that was taken during the shooting. According to a statement released by the family:

According to several witnesses, Ernesto posed no threat to the officer as he exited the back of the truck with his hands up. His leg became entangled in the seatbelt and as he fell to the ground he was shot by the officer without hesitation. Each shot ensuring death being the only outcome for Ernest including the final shot to the face. The officer made the decision to use excessive deadly force with such disregard for my cousin's life.

In West Sacramento on Wednesday, July 20th, people rallied against Sacramento police who brutality beat one man while responding to a fight. Police arrived and beat the man, who later had to be put in crutches and then pushed his wife who was holding their child to the ground. Close by, another man was filming the incident and police arrested him and took his camera. He now sits in a jail cell awaiting deportation. According to a post on indybay:

On Sunday July 17th, West Sacramento resident Jesus Castro was arrested and had his camera confiscated by West Sacramento police while videotaping an incident of police brutality. Mr. Castro, who is undocumented, now faces deportation and is currently being held at Yolo County Jail. This follows a pattern of police brutality and discrimination in Yolo County, especially in West Sacramento, where the Latino community has been under siege for several years. This includes so-called gang injunction, which specifically targets Latino youth, forbidding them from dressing in certain colors that the short-sighted authorities believes identifies them as gang members, as well as depriving them of their freedom of association.

Sacramento police claim that their own camera did not capture the beating, since they were turned "away" from the incident, and they of course aren't releasing the footage of the arrested man, Jesus Castro. Also, it has been reported by attorneys that Castro's cell-phone footage has also been erased, most likely by the police themselves.

On Friday, July 22nd, between 100 and 150 family members, friends, and supporters braved the hot Stockton streets to demonstrate and remember the brutal shooting death of James Rivera in 2010. Protesters rallied outside of the Stockton Police Department HQ and then proceeded to march through Downtown Stockton to the DA's office. Various speakers addressed the crowd and later in the day a BBQ and vigil were held to commemorate James' life.

While these struggles all strive for very basic things: the releasing of a video, the finishing of an investigation - what is important is that they have connected so many people across a very wide region. They have brought together families and friends that are black, white, Chicano, and more, together around a shared experience of police brutality and terror. Together, we can support each other's struggles and give power to the battles that we face in our respective cities.
http://www.modestoanarcho.org
Add Your Comments
Support Independent Media
We are 100% volunteer and depend on your participation to sustain our efforts!