Add an Event
Newswire
Calendar
Features
Home
Donate
From the Open-Publishing Calendar
From the Open-Publishing Newswire
Indybay Feature
Publish to Newswire
Add an Event
Related Categories: San Francisco | Police State & Prisons | Racial Justice
Over 20 arrested on Powell at end of snake march from Dolores Park: photos
by dave id (real time via mobile phone)
Tuesday Jul 19th, 2011 8:28 PM
After a long anti-police snake march from Dolores Park through the Castro and it's Muni station, then to downtown, about 17 people were kettled by police on Powell Street near the trolley turnaround. Arrestees are being taken away one by one as large crowds on all sides chant "Let them go!" and "Fuck the police!" Arrestees appear to be diverse in age, gender, and race, and include one person in a wheelchair and a Bay City News reporter. 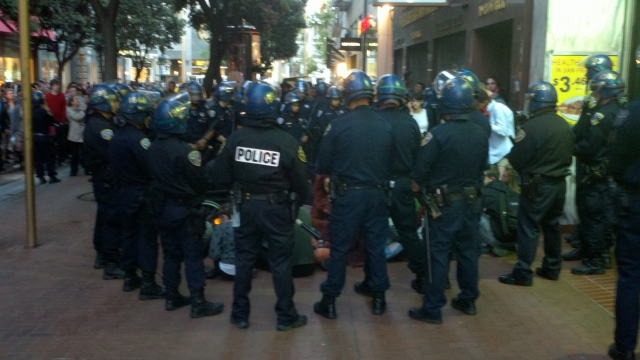 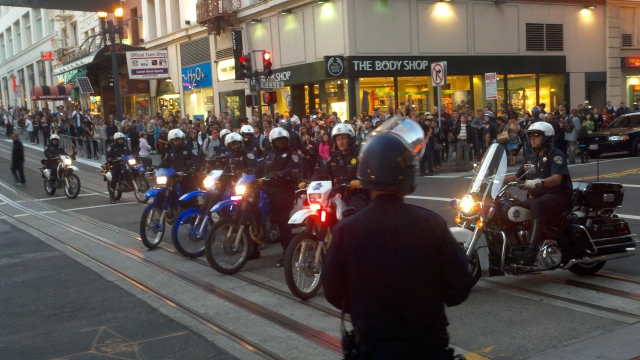 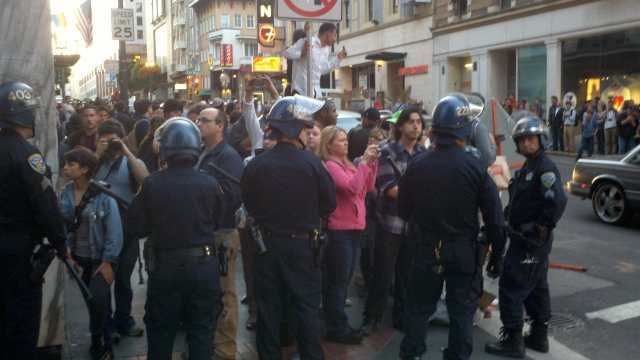 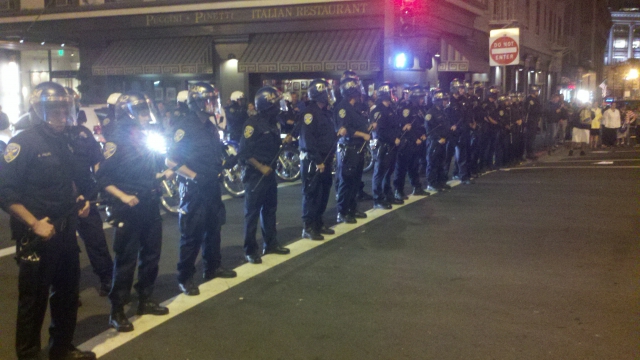 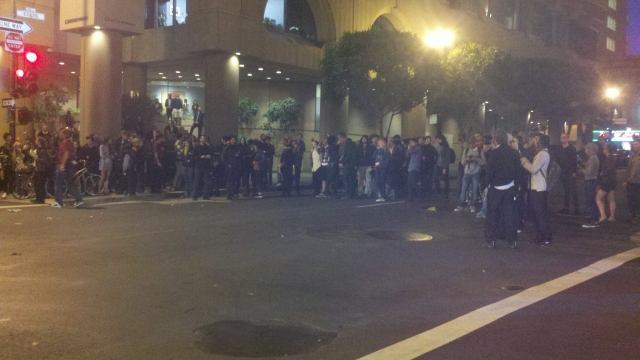 §THANK YOU!
by Herm
Tuesday Jul 19th, 2011 9:12 PM
SOLIDARITY AND THANK YOUS TO ALL THE ARRESTEES!
-A young black male (potential police murder victim)
Add a Comment
§SFGate posts then hides video
by hmmm
Wednesday Jul 20th, 2011 12:03 AM
Odds are they are providing it to the police, just not you and me.

Now it says "this video is private."
Add a Comment
§Vote on SFGate Poll Now Protest Justified
by Reader
Wednesday Jul 20th, 2011 7:54 AM
The police tabloid, the San Francisco Chronicle, has a sales-promoting poll with their story on the arrest of 35 people who protested the BART and SF Bayview police assassinations. THE ONLY GANG THAT EXISTS ON THE STREETS IS THE POLICE, and the gang that directs them is the capitalist class, whose mouthpieces are the Democrat and Republican Parties. THERE IS NO NEED FOR ANY POLICE, they do not fight crime; they are the criminals. We need education and job training for decent paying jobs. Both of the victims were poor people who needed help, not police assassinations. Please go to the poll at
http://www.sfgate.com/cgi-bin/article.cgi?f=/c/a/2011/07/20/BAUR1KCGBA.DTL
and vote JUSTIFIED.
http://www.sfgate.com/cgi-bin/article.cgi?...
Add a Comment
§KPFA's 8 a.m. July 20 news provides police lies
by Listener
Wednesday Jul 20th, 2011 8:12 AM
KPFA's 8 a.m. July 20 news had a police version of this protest. The young man who was shot in the back by police for evading a $2 fare is now being framed by the police for prior problems, which were regurgitated by the Hate Pacifica announcer, Aileen Alfandarry. IT IS IRRELEVANT WHAT KIND OF RECORD THE VICTIM HAD; fare evasion does not mandate a police execution and the police have no right to act as judge, jury and executioner. FARE EVASION JUST MANDATES A CITATION. She also announced the police story that someone threw a smoke bomb somewhere. SHE DID NOTHING TO SUPPORT THIS VERY MUCH NEEDED PROTEST. THE POLICE ARE SHARPSHOOTERS. If they ever think they are threatened, they can shoot someone in the foot. THEY WERE NOT THREATENED WITH THE BART OR SF MUNI SHOOTING. We are experiencing open police state assassinations. THIS IS CALLED FASCISM. ANYONE IS NEXT.
Add a Comment
§the hammer throw
by chz
Wednesday Jul 20th, 2011 8:38 AM
I think most of the officers wear a radio, and traditionally, the SFPD will display superficial tolerance of protest marches, but will receive orders to kettle and arrest the whole group once the imaginary circle within a couple blocks of Union Square is broached. (This occurred numerous times in antiwar, anti-G8 or Bush rallies, for example).

My take is that while it was tactically a bad decision to stage a big rally about Harding (rather than Charles Hill or many other questionable shootings that occur during the year) because most of the public heard that Harding shot first at the officer, this march was a strategic success!
I couldn't attend, but the photos at the Chronicle (where an officer pushed a photographer), or at CBS (where a protester pushed a cameraman while they were doing a good interview with a woman) made San Francisco look like a chaotic and somewhat risky place to visit, with groups of roving angry people. This should have some positive 'yuppie eradication' effects. The growing income disparity between ability of the working class to earn money through labor, vs the price of basic shelter/food/transportation in this city has to be an underlying driver of the anger.

In the newspaper this last week, there were reports of rents starting to shoot up again in the San Francisco/San Jose area due to high revenue tech jobs - e.g.studios well over $1000, many 1-bedrooms over $2000 or houses still costing >$700k. It appears to take $100k incomes to pay the landlord, car, college, medical insurance. Someone could have been responsible, worked hard, studied math, and even gotten a 4year degree, and still can't enter this upper tier of jobs. Good luck affording children or a car with a $40k income around here.
Meanwhile, thousands of high school grads or working class are lucky to earn $10/hour, if they are permitted to be employed at all. After attempting to pay for everything else, $2 bus fares are not affordable to people in this lower tier - if they are lucky enough not to be in debt. Do the quick math of how much that adds up to over a month, with money from a job they don't even have.
This situation will lead to a lot of anger. How will the bay area ever reverse the unsustainable widening between economic tiers which suggests that most of the bottom tier will need to leave and move to Phoenix to avoid debt.
Therefore, it is great that images from this march will be discussed on talk radio or online.
Add a Comment
§From paris with love
by 83
Wednesday Jul 20th, 2011 9:06 AM
In Paris youth started burning as many cars on the streets as possible every time the police killed someone! And they would just keep doing it every night, and sometimes when the fire department would come to put it out they would attack them, then the police would show up and they would attack the cops too.

That would really work in SF i think, could spread easily among people who hate the police and those who fear they may be the next victim, and would be amazing to see!
It worked in France to start a national debate about the treatment of ghetto youths.

Please repost this video to get the truth out.

http://www.youtube.com/watch?v=P2JJcpwYjbI
http://www.youtube.com/watch?v=P2JJcpwYjbI
Add a Comment
§So-called gun was a cell phone; Muni must be free; Democratic Party mayor does nothing
by Saw Video
Thursday Jul 21st, 2011 8:56 AM
The video clearly shows that the item picked up was a silver-colored cell phone. The police clearly made up a lie about retrieving a silver-colored gun from someone, not yet seen by anyone, and somehow this dead kid had burns on his hand, yet what was retrieved was a cell phone.

It is long overdue to eliminate fares on our buses and trains.

Meanwhile, we have a mayor's race. The police chief answers directly to the mayor and he should be fired immediately for perpetrating this murder and the usual lies: a gun, a criminal record and protecting women! The current mayor, Ed Lee, has not said anything or done anything. For that, Ed Lee should resign. Then there are the rest of the Democratic mayoral candidates, and all but 1, a Green, are Democrats. The entire Democratic and Republican Party should be avoided. Only the Greens and Peace & Freedom Party candidates are worth considering.

Guns, tasers, pepper spray are all inappropriate anywhere in civil society, on the streets, in homes, in prisons. Prisons must be abolished, rehabilitation must exist. We cannot have guns and butter. The Democrats and Republicans promote guns; Peace & Freedom and the Greens promote butter.
Add a Comment
§diff object
by .c
Thursday Jul 21st, 2011 1:15 PM
if you carefully look at the youtube video, it first shows a gun (or other object) 20ft away, then it shows the people pointing at a cell phone 10 feet away. These were different objects.
Use the horizontal and vertical sidewalk cracks as a way to keep track of the space. The man with a striped sweatshirt isn't standing near the hypothetical gun.
Add a Comment
§It does not matter if he had a gun
by -A-
Thursday Jul 21st, 2011 2:58 PM
People are not just angry because of one incident here. It just goes to show you how disconnected you are from reality and your community. You just fail to see the BIGGER picture!
Add a Comment
§He died from a bullet....
by E
Thursday Jul 21st, 2011 7:22 PM
...from his own gun according to the SF medical examiner. The pathologist pulled a .380 slug from his head. The pistol recovered later was not the fatal weapon. The medical examiner's office hasn't determined whether the fatal wound was accidentally or deliberately self-inflicted.
Add a Comment
Support Independent Media
We are 100% volunteer and depend on your participation to sustain our efforts!