Add an Event
Newswire
Calendar
Features
Home
Donate
From the Open-Publishing Calendar
From the Open-Publishing Newswire
Indybay Feature
Publish to Newswire
Add an Event
Related Categories: Santa Cruz Indymedia | Global Justice & Anti-Capitalism
Interview w/ Corrina Gould (Ohlone), about protecting Glen Cove and other sacred places
by via Free Radio Santa Cruz
Tuesday Jul 19th, 2011 5:01 PM
This is an audio recording of Donna Wallach and Darlene Wallach interviewing Corrina Gould on Free Radio Santa Cruz on July 9th. Corrina Gould is Chochenyo/Karkin Ohlone, descended from the original people of the East Bay and the shores of the Carquinez Strait. She talks about the current struggle to protect Glen Cove (Sogorea Te), a sacred shellmound burial ground and village site on the Carquinez Strait in Vallejo, CA, and also speaks generally about the current situation of Ohlone people in the Bay Area, and the long-term struggle to protect Bay Area Shellmounds.
Listen now:
Copy the code below to embed this audio into a web page:
Download Audio (26.0MB) | Embed Audio
A recording of the full 3-hour "Free Our Minds" radio program, which this interview with Corrina Gould was a segment of, is available at: 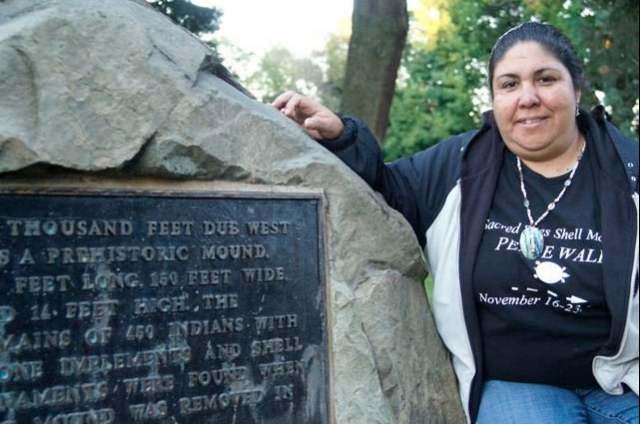 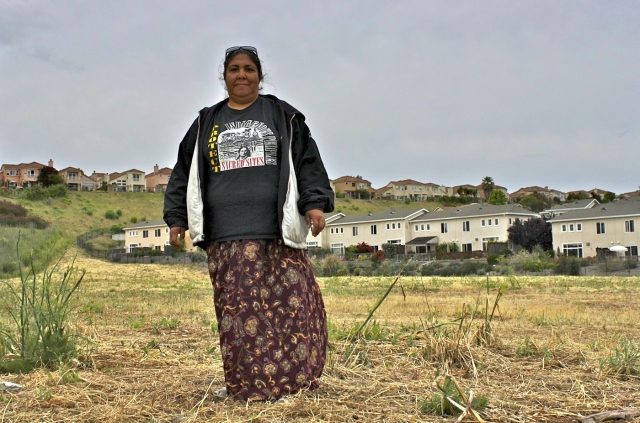 original image (1400x927)
Corrina Gould (Karkin/Chochenyo Ohlone) standing upon the very ground that the Greater Vallejo Recreation District is proposing to bulldoze. When the housing development seen behind her was built, human remains and cremations were unearthed. Photo: Marc Dadigan
http://protectglencove.org/
Add Your Comments
Support Independent Media
We are 100% volunteer and depend on your participation to sustain our efforts!