Add an Event
Newswire
Calendar
Features
Home
Donate
From the Open-Publishing Calendar
From the Open-Publishing Newswire
Indybay Feature
Publish to Newswire
Add an Event
Related Categories: East Bay | Racial Justice
Glen Cove Park Project still to be decided - protest enters 93rd day at the Glen Cove site
by Francisco Da Costa
Friday Jul 15th, 2011 6:14 AM
A meeting was held by the Greater Vallejo Recreation District at 395 Amador Street in Vallejo. The Glen Cove project was on the agenda - and some decision made behind closer doors. After over an hour of deliberation - some vague information was related. None of it made good, sense. The protest at the Glen Cove site continues - today, is the 93rd day. In the interim - plans are afoot to build a parking lot and some rest rooms - on Sacred Burial grounds - at Glen Cove. 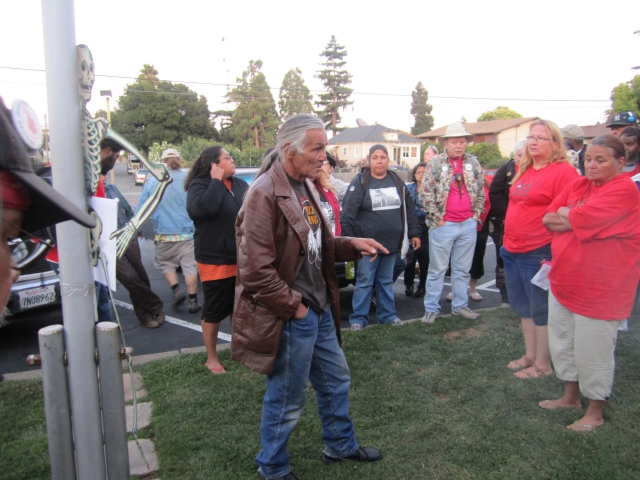 The protesters have one goal in mind to preserve the Sacred Burial Ground at Glen Cove - known in the Ohlone language as Sogorea Te.

On the decision to protect and respect the Sacred Burial Grounds - all the tribes - Federally recognized and federally - not recognized, are agreed upon.

The Greater Vallejo Recreation District - has been making vain attempts to divide the Native American protesters - who have taken a stand - against great odds to preserve their Burial Sites - known as Shellmounds - and pay their due respect daily to their ancestors.

Not so the Greater Vallejo Recreation District - and its Board of Directors:

You can telephone 707-648-4600 or visit the Greater Vallejo Recreation District website for further information:

In the meantime nothing will deter the protesters and the ardent supporters - and many were present at the charade presented by the Greater Vallejo Recreation District meeting yesterday at 6 pm - July 14, 2011 at 395 Amador Street, in Vallejo, California.

Glen Cove is a sacred gathering place and burial ground that has been utilized by numerous Native American tribes since 1500 BC.

It is know as Sogorea Te in the Ohlone language.

Archeologists working for the University of California first surveyed the Glen Cove site in 1907.

Since that time hundreds of intact skeletal remains and cremations have been documented. Along with thousands of sacred objects, tools, and other artifacts.

The fifteen acre Glen Cove Sacred Burial Ground is owned by the City of Vallejo and is open to the public as a natural area.

Since 1998 the Greater Vallejo Recreation District (GVRD) and the City of Vallejo have pursuing the development of the Glen Cove site into a "fully featured" public park.

The current GVRD Master Plan calls for the installation of parking lot, restroom facilities, picnic tables, and construction of additional trails, including a paved trail.

Further the entire site is slated for re-grading and digging that will disturb the Sacred Remains of those buried for hundreds of year if not thousands.

Vallejo was one of the first cities, in recent years - in the Nation to declare bankruptcy.

Today Vallejo has no money to address Quality of Life issues - education, garbage collection, the Fire Department, Law Enforcement, the many pot-holes. Crime is on the increase and the property value of the homes decreased by over twenty five percent.

It is a fact as I addressed at the meeting yesterday during Public Comment - that the Glen Cove site comes under the jurisdiction of the City of Vallejo that has declared bankruptcy. The Greater Vallejo Recreation District - pretends that it owns the property - this is not so.

The City of Vallejo's unfunded pension liabilities total over $200 million. Yet, some entities want to waste money; building a parking lot, rest room, to desecrate a Sacred Burial Ground.

The local spiritual Native American leaders and advocates both indigenous and others were present - among them Corrina Gould, Fred Short, Wounded Knee DeOcampo, Morning Star and many others.

Focused public comment was decided upon on Agenda Number 11 address Glen Cove Park Project and the Construction of Glen Cove Nature Area. The Board of Directors heard the comments but could not take any decisive action nor could they give any clear answers.

Some, behind the scene negotiations are taking place - and it involves money - some $300,000 by some that want to placate the protesters.

The protesters are agreed upon that no parking lot, no restroom, nothing that desecrates the Sacred Burial Ground will be tolerate.

A Federal Law - called the Native American Graves Protection and Rehabilitation Act (NAGPRA) - spells the details - for both non-Federally Recognized and Federal Recognized Native Americans. Sacred Remain must be protected - that is a Federal Law accepted by the Congress of the United States.

The Governors then sent edicts to kill any Native American - if you brought a scalp - you were paid $5. This is the sordid history of the area and a people in authority - that still favor discrimination.

Nothing much has changed in all these years. Those that speak with fork tongues continue to do so with blatant disregard for decency, fair play, and the dictates underlined in the United States Constitution. Those that take a stand for what is right are persecuted.

What is so difficult to comprehend - about not building a parking lot, restrooms, on a site that has for thousands of years - been respect as Sacred Burial Ground?

Here are some photographs of yesterday event - a meaningful gathering outside and the dog and pony show - inside:

Francisco Da Costa
Director
Environmental Justice Advocacy
http://www.flickr.com/photos/franciscodaco...
Add Your Comments
LATEST COMMENTS ABOUT THIS ARTICLE
Listed below are the latest comments about this post.
These comments are submitted anonymously by website visitors.