Add an Event
Newswire
Calendar
Features
Home
Donate
From the Open-Publishing Calendar
From the Open-Publishing Newswire
Indybay Feature
Publish to Newswire
Add an Event
Related Categories: Labor & Workers
The Oscar Grant Murder Cover-up, Privatization & Whistleblower IFPTE 21/OFD Sean Gillis
by Labor Video Project
Wednesday Jun 29th, 2011 4:12 PM
Sean Gillis, a whistleblower at the Oakland Fired Department speaks out about the cover-up of the care after Oscar Grant was murdered. He also discusses the systemic racism and discrimination including the shutdown of the Merritt College program to train paramedics from the Community. 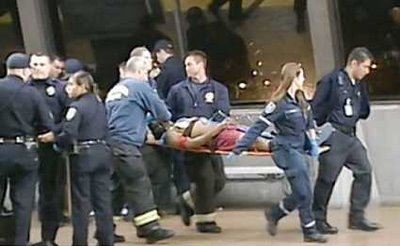 Sean Gillis, an Oakland Fire Department EMT paramedic
trainer and Vice President of IFPTE Local 21 Unit M called for an
investigation of the treatment of Oscar Grant who was murdered
at the Fruitville BART station. As a result he has been targeted for
firing and harassment. Gillis talks about the conditions in the
department and the efforts to silence him after he called for an
investigation. He also discusses the atmosphere of racism and the
privatization scheme being pushed by the management of the
department to outsource from Merritt Community College the
training of paramedics from the community to a private company
AMR. Also interviewed was labor and civil rights attorney Phil
Horne who is representing Sean Gillis. This interview was conducted
on June 12, 2011.
For more information on the case go to http://groups.google.com/group/justiceforseanatoaklandfire?lnk=
Production of Labor Video Project http://www.laborvideo.org laborvideo.blip.tv
http://blip.tv/laborvideo/the-oscar-grant-...
Add Your Comments
Support Independent Media
We are 100% volunteer and depend on your participation to sustain our efforts!