Add an Event
Newswire
Calendar
Features
Home
Donate
From the Open-Publishing Calendar
From the Open-Publishing Newswire
Indybay Feature
Publish to Newswire
Add an Event
Related Categories: California | North Coast | Environment & Forest Defense | Government & Elections | Racial Justice
Tribal members gather to protest proposed MLPA closures
by Dan Bacher
Saturday Jun 18th, 2011 7:57 PM
"Our rights are not negotiable," said Hoopa Tribal Citizen Dania Rose Colegrove, an organizer for the Klamath Justice Coalition, who gathered seaweed and mussels along with 11 others at Patrick's Point. "The state of California, under the MLPA Initiative, is trying to make us into 'recreational users.' However, where we gather as Tribal members is none of their business." 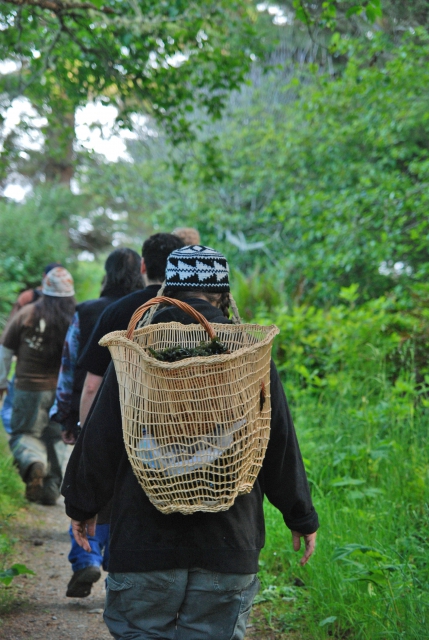 Members of the Yurok, Hoopa Valley, Karuk and other Tribes on Saturday, June 18 gathered seaweed, mussels and clams at three beaches on the North Coast to protest proposed restrictions on coastal gathering proposed under the Marine Life Protection Act (MLPA) Initiative.

The Tribal members, organized by the grassroots Klamath and Coastal Justice Coalitions, gathered at Patrick’s Point State Park at 5:30 am, Clam Beach at 7:30 am and Wilson Creek Beach near Klamath at 8:30 am.

"Our rights are not negotiable," said Hoopa Tribal Citizen Dania Rose Colegrove, an organizer for the Klamath Justice Coalition, who gathered seaweed and mussels along with 11 others at Patrick's Point. "The state of California, under the MLPA Initiative, is trying to make us into 'recreational users.' However, where we gather as Tribal members is none of their business."

She said no park rangers interfered with the harvesting of coastal resources by Tribal members at Patrick's Point, as rangers have done in the past.

She pointed out the hypocrisy of the MLPA's "marine protected areas" outlawing tribal gathering and fishing, while doing nothing to stop ocean industrialists from destroying the marine ecosystem.

"How is it that the MLPA doesn't protect the ocean from big oil, wave energy projects, water pollution, military testing and all of the people who want to mess up the ocean, the people with big money," Colegrove emphasized. "Now the North Coast has been opened up to military testing by the Navy."

"We're doing this in solidarity with all of coastal tribes now that the MLPA North Coast process is coming to a head," she noted. "Our message is 'Don't mussel us out.' We're here to stay - we've been gathering here for thousands of years and we will continue to gather."

“It is our sovereign and sacred right to harvest coastal resources according to our customs. We will no longer allow the state or the feds to criminalize our culture. They will have to acknowledge that we are part of the ecosystem," added Colegrove.

“Our methods of take enhance these resources rather than harm them," said McConnell. "We offer as evidence the abundance of coastal resources prior to European contact. Prayer is an integral part of the process as no life can be taken without acknowledgement of that life. We thank the creator and the plant/animal for that life each and every time we gather a resource.”

McConnell said decades have passed and public perceptions about Native Americans have changed since most of the rules that govern California’s coast were signed into law.

“These government bodies have made criminals out of people for embracing their culture. It is time to decriminalize our culture. We want the people of California to know that and join us in the process of reversing it,” McConnell concluded.

Local Tribes use hundreds of coastal resources for ceremonial regalia, medicine and for subsistence, according to Colegrove. Under the proposed Marine Life Protection Act marine protected areas, tribal citizens face fines and potential incarceration for harvesting for traditional purposes in a culturally appropriate way. Regulations against indigenous people in state parks, federal marine reserves and the proposed MLPA marine protected areas are an "unacceptable and outdated threat to native sovereignty and culture," she stated.

Representatives of the Yurok Tribe and other tribes have met with John Laird, Secretary of the California Natural Resources Agency, regarding tribal gathering under the MLPA, but the state has to date failed to address tribal fishing and gathering rights.

The California Fish & Game Commission (CFGC) will meet in Stockton on June 29-30 to discuss and adopt the amended unified proposal for marine protected areas on the North Coast. The MLPA Blue Ribbon Task Force and the Regional Stakeholders Group both recommended allowing traditional tribal fishing and gathering to continue in North Coast marine protected areas (MPAs), but the unified proposal has been altered in a number of areas, to the chagrin of Tribes, fishermen and environmentalists.

According to the North Coast MPA Options posted on the Fish and Game Commission website on June 9, "Staff determined during the planning process was that one way in which traditional, noncommercial, tribal gathering activities can be allowed to continue uninterrupted within MPAs (other than state marine reserves) is by incorporating such activities as proposed recreational uses for all non-commercial users; accordingly, such uses were incorporated into both the RNCP (Stakeholder Group 'Unified' MPA Proposal) and the ECA (Ecoregional Conservation Assessment) and are listed separately from other proposed recreational uses as recreational uses intended to accommodate tribes.”

However, the MLPA Master Plan Science Advisory Team advised that "this solution does not meet the science guidelines in the Master Plan and, hence, could reduce the likelihood that proposed MPAs will meet the goals of the MLPA."

Colegrove said that tribal members will show in force at the Fish and Game Commission meeting to defend their sovereign rights that they consider to be under attack by the MLPA Initiative.

For the meeting agenda and other information, go to: http://www.fgc.ca.gov. To read the most recent MLPA options, go to: http://www.dfg.ca.gov/mlpa/ northcoast.asp. For more details on the amended proposal, please read Frank Hartzell's article, http://www.mendocinobeacon.com/news/ci_18287706?source=rss

The Klamath and Coastal Justice Coalitions are native alliances formed with the aim of protecting tribal rights. The KJC played a large role in pushing forward the removal of four dams on the Klamath River and is currently working to ensure California’s Marine Life Protection Act honors tribal sovereignty.

The Marine Life Protection Act (MLPA) is a law, signed by Governor Gray Davis in 1999, designed to create a network of marine protected areas off the California Coast. However, Governor Arnold Schwarzenegger in 2004 created the privately-funded MLPA "Initiative" to "implement" the law, effectively eviscerating the MLPA.

The "marine protected areas" created under the MLPA Initiative fail to protect the ocean from oil spills and drilling, water pollution, military testing, wave and wind energy projects, corporate aquaculture and all other uses of the ocean other than fishing and gathering.

The MLPA Blue Ribbon Task Forces that oversaw the implementation of "marine protected areas" included a big oil lobbyist, marina developer, real estate executive and other individuals with numerous conflicts of interest. Catherine Reheis Boyd, the president of the Western States Petroleum Association who is pushing for new oil drilling off the California coast, served as the chair of the MLPA Blue Ribbon Task Force for the South Coast.

The MLPA Initiative operated through a controversial private/public "partnership funded by the shadowy Resources Legacy Fund Foundation. The Schwarzenegger administration, under intense criticism by grassroots environmentalists, fishermen and Tribal members, authorized the implementation of marine protected areas under the initiative through a Memorandum of Understanding (MOU) between the foundation and the California Department of Fish and Game (DFG).

MLPA and state officials refused to appoint any tribal scientists to the MLPA Science Advisory Team (SAT), in spite of the fact that the Yurok Tribe alone has a Natural Resources Department with over 70 staff members, including many scientists. The MLPA Blue Ribbon Task Force also didn't include any tribal representatives until 2010 when one was finally appointed to the panel.

"Whether it is their intention or not, what the Marine Life Protection Act does to tribes is it systematically decimates our ability to be who we are," stated Frankie Joe Myers, a Yurok tribal citizen and organizer for the Coastal Justice Coalition on July 21, 2010, during a historic direct protest against the MLPA's violation of tribal rights in Fort Bragg. "That is the definition of cultural genocide." 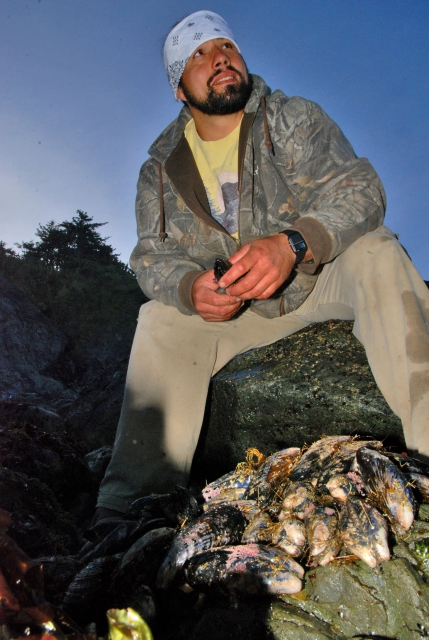 original image (1944x2896)
Yurok Tribal Member Richard Myers cleans mussels inside of Patrick's Point State Park. The Park does not recognize the rights indigenous tribes who depend on gathering there to perpetuate their lifeways. 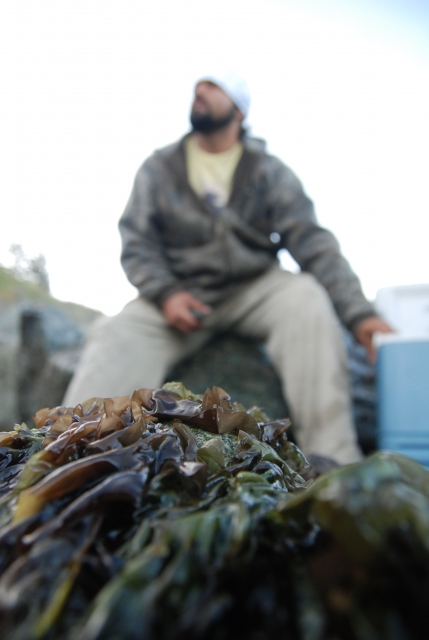 original image (1944x2896)
Seaweed is a staple for Pacific Northwest and California Tribes.