Add an Event
Newswire
Calendar
Features
Home
Donate
From the Open-Publishing Calendar
From the Open-Publishing Newswire
Indybay Feature
Publish to Newswire
Add an Event
Related Categories: Santa Cruz Indymedia | Anti-War
U.S. should recognize Palestinian State in 2011
by Aan
Tuesday Jun 14th, 2011 11:41 PM
Tired of waiting for Israel to compromise Jerusalem, illegal settlements and ending the military occupation of Palestine, Palestinians will go to UN to demand statehood in September. Other countries such as Kosovo and South Sudan have gotten the support of the U.S. for statehood. Will Palestine be next?

Read: politicalcorrection.org/fpmatters/201101180008
If the Palestinians go ahead with their plans to declare a state later this year, the United States should recognize it.
There really is no good reason not to.
After all, ever since the days of Lyndon B. Johnson, presidents from both parties have expressed support for the return of the occupied territories in exchange for peace. No nation, other than Israel itself, recognizes any of that land — including Arab East Jerusalem — as part of Israel. And the United Nations, which issued Israel its birth certificate in 1947, appears ready to do the same for the State of Palestine this summer.

It was once widely assumed that creation of the Palestinian state would be negotiated between Israelis and Palestinians. No more. The final nail in the direct-negotiations coffin was driven by Prime Minister Binyamin Netanyahu when he coldly rejected President Obama's offer of an extra $3.5 billion in U.S. aid in exchange for a 90-day settlement freeze.
Netanyahu couldn't even bring himself to explicitly reject an offer he considered so contemptible. He just left it (and President Obama) dangling in the wind while he issued more building permits for settlers and expulsion orders for Palestinians. (Read more at link above)
Time for a Palestinian State 2011?
Read: blogs.aljazeera.net/middle-east/2010/12/21/2011-time-palestinian-state

If you can’t beat them…try going it alone.
That seems to be the new motto in the Palestinian camp. The idea is to get the United Nations to recognize a Palestinian state based on 1967 borders. Intense diplomacy is underway to get member states to onboard with the idea - so far a handful of Latin American countries (known to be sympathetic to the Palestinian cause) have lent their support. 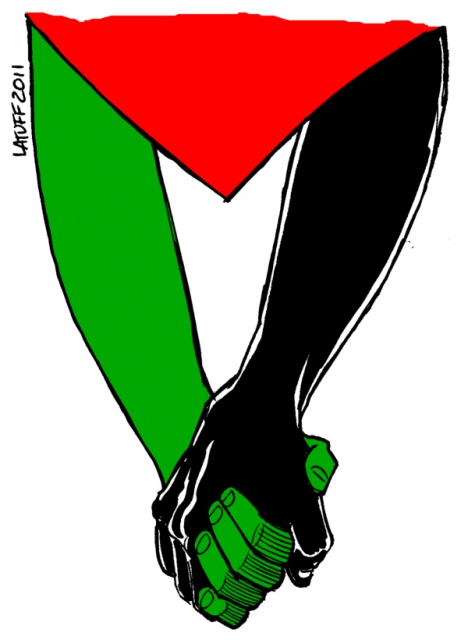 original image (600x820)
http://www.ignoringoccupation.00page.com
Add Your Comments
Support Independent Media
We are 100% volunteer and depend on your participation to sustain our efforts!