Add an Event
Newswire
Calendar
Features
Home
Donate
From the Open-Publishing Calendar
From the Open-Publishing Newswire
Indybay Feature
Publish to Newswire
Add an Event
Related Categories: East Bay | Police State & Prisons | Racial Justice
Oakland Protests Release of Oscar Grant's Killer Johannes Mehserle, 6/12/11: photos
by dave id
Monday Jun 13th, 2011 11:09 PM
On Sunday, June 12th, hours before Johannes Mehserle was set to be released from Los Angeles County Jail for having killed Oscar Grant by shooting him in the back, hundreds rallied in Oakland at Fruitvale BART station, the scene of the crime, marched up International Boulevard, and again rallied downtown at 14th & Broadway to protest Mehserle's lenient conviction, sentencing, and time served. Today there was a protest at the Los Angeles County Superior Court, followed by a march to the U.S. District Court to demand that federal civil rights charges be brought against Mehserle and the other BART officers who abused Oscar Grant and his friends on January 1st, 2009. Mehserle served eleven months of a two-year sentence for Involuntary Manslaughter and was released just after midnight on June 13th. 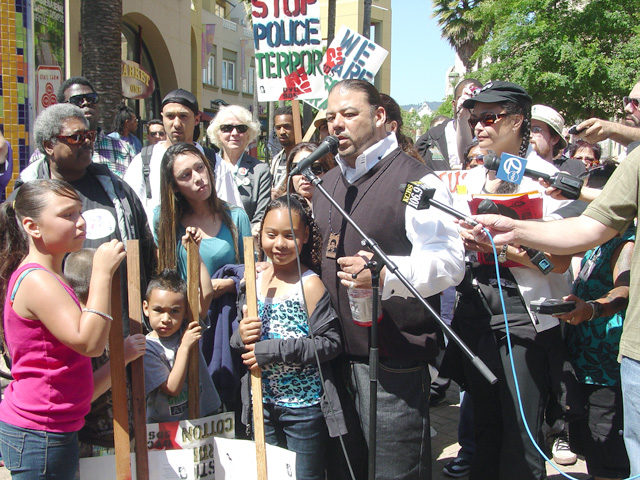 [Pictured above: at Grant/Fruitvale BART Station, Jack Bryson speaks with Oscar Grant's daughter Tatiana in front of him]


The Coalition for Justice for Oscar Grant put out a call for an open public meeting on June 26th to discuss where the movement goes from here:

Which Way Forward?
Community Meeting on How to Stop Police Abuse

Join the Coalition for Justice for Oscar Grant at the Humanist Hall on Sunday, June 26th, from 1–5 pm, to share ideas for moving ahead in the struggle for justice for Oscar Grant, for all victims of police misconduct, and to stop police abuse from occurring in our communities. 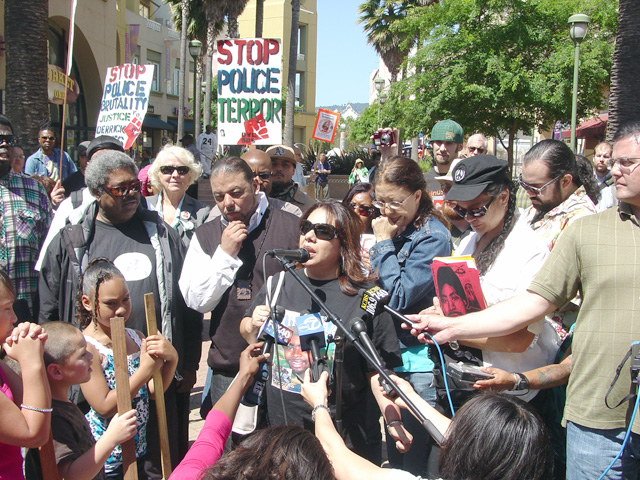 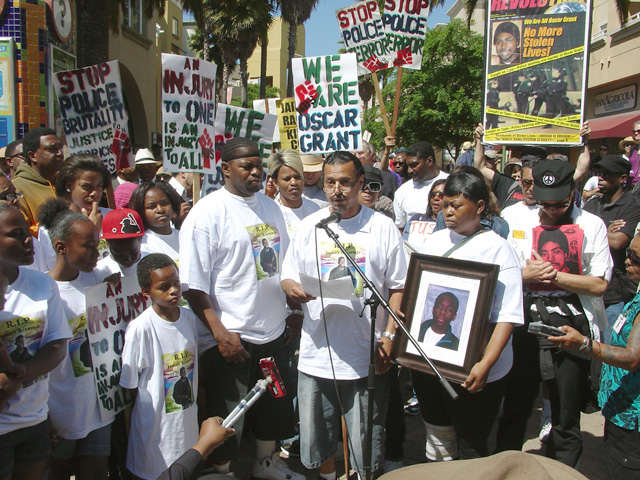 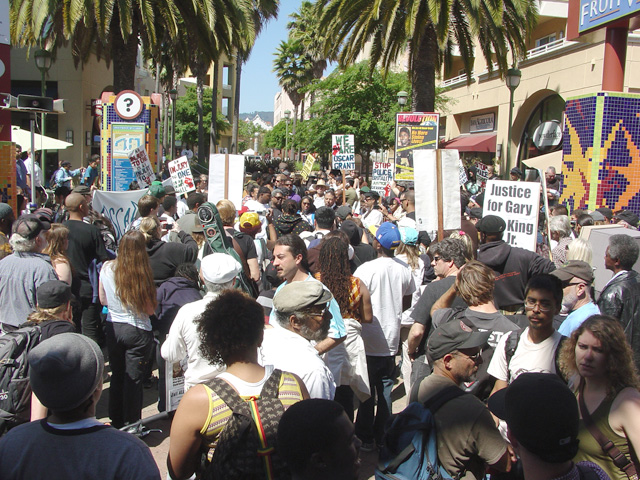 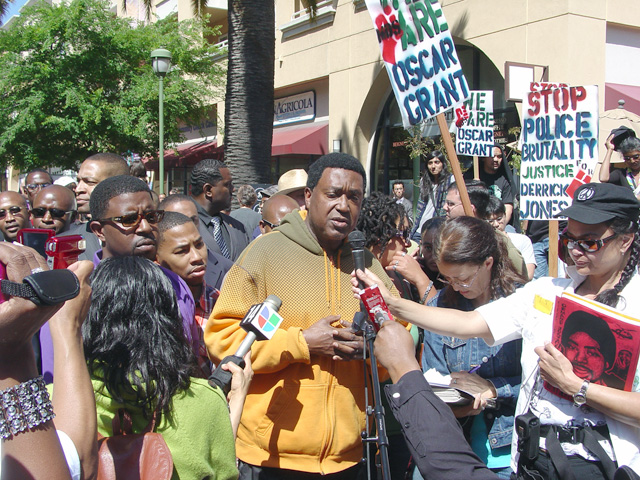 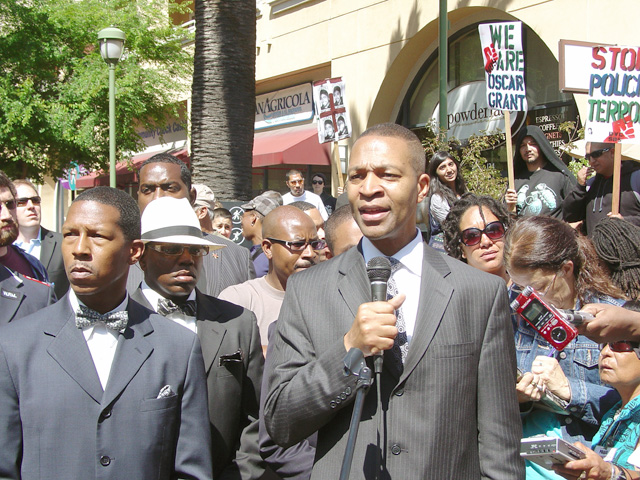 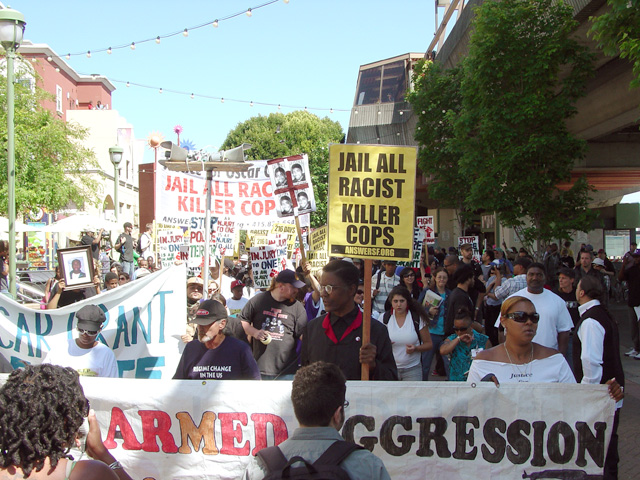 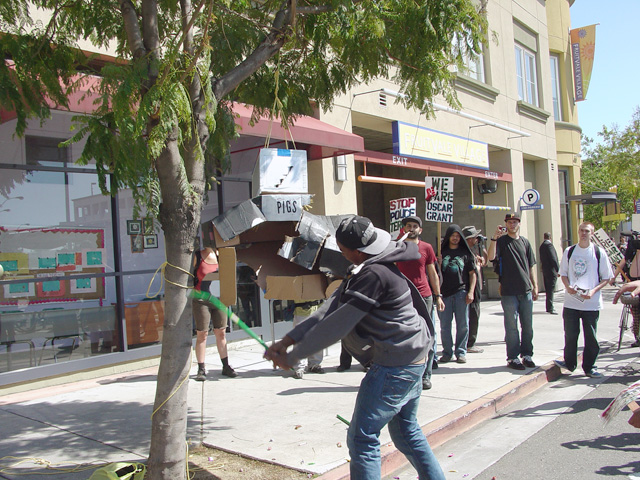 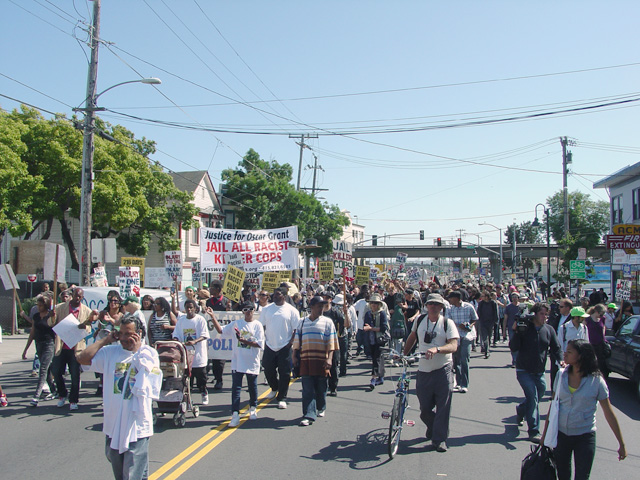 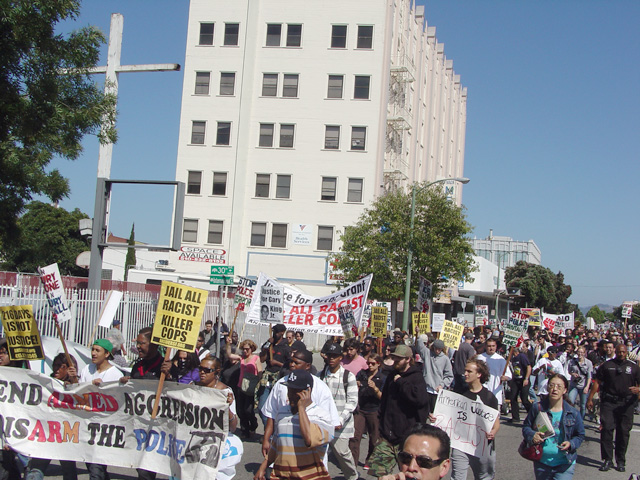 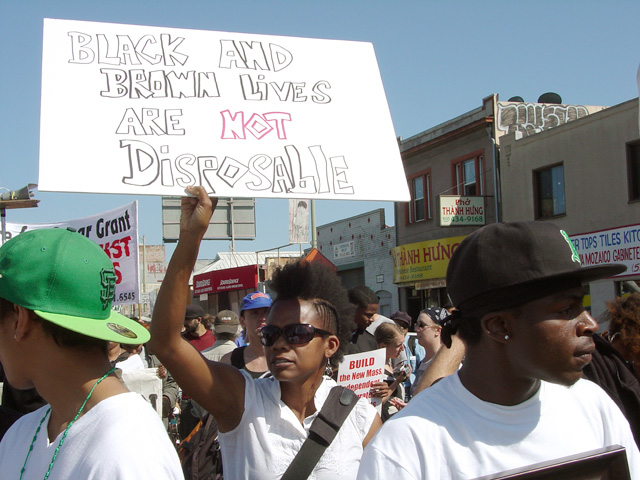 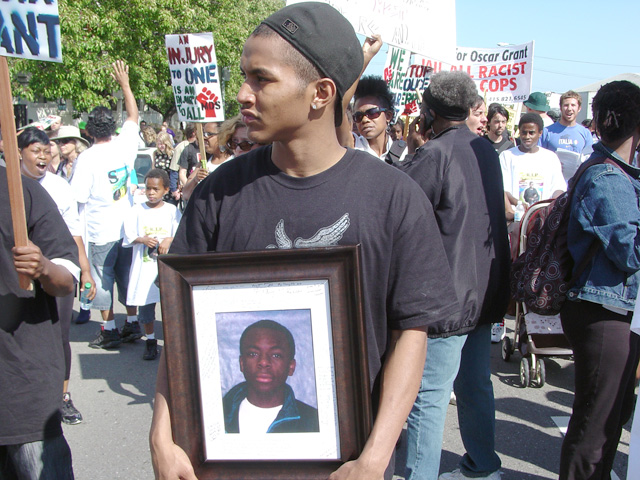 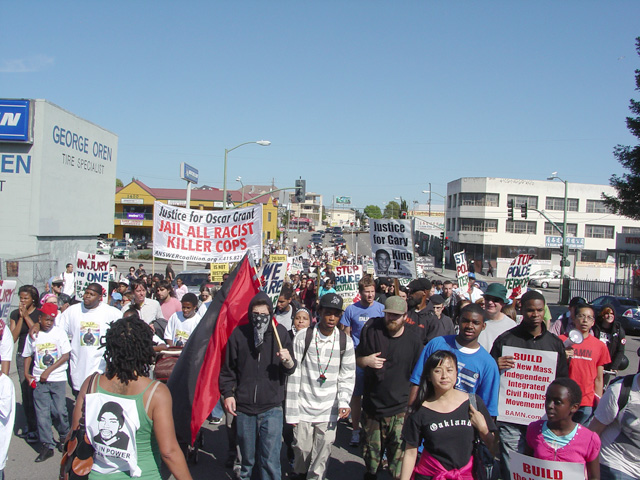 As the march passed 2nd Avenue on International, a uniformed OPD snatch squad waited, directed no doubt by undercover officers moving amongst the crowd, then came forward and pulled two or three people from the march for arrest. The crowd blocked the front of the car and chanted, "Let them go!" until the police car hit the gas in reverse and left the scene down 2nd Ave. The march continued despite the provocation. Police "negotiators" in the march were heard afterward saying those snatched had been painting graffiti, but at least one arrested (later released without charge) had clearly done no such thing. http://www.indybay.org/newsitems/2011/06/13/18681704.php#18681712 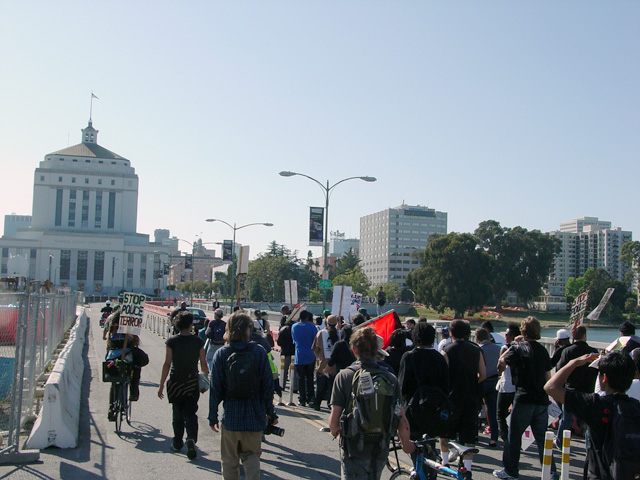 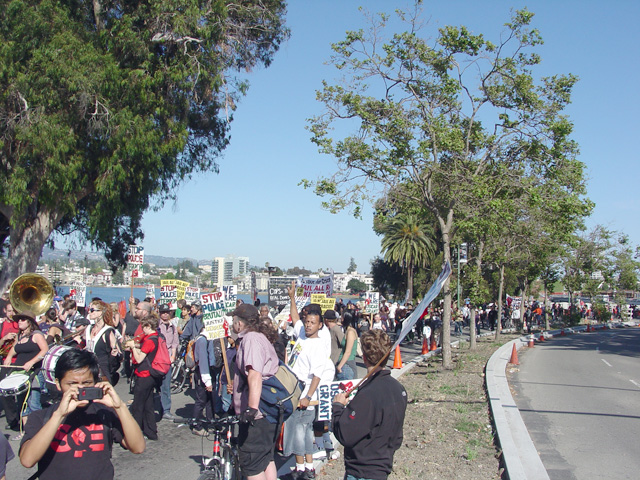 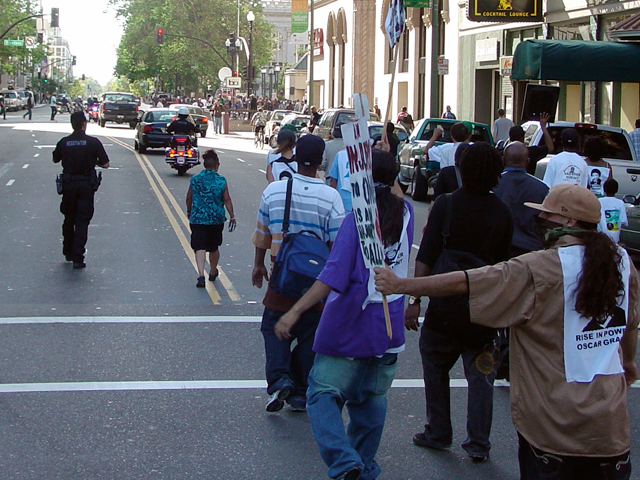 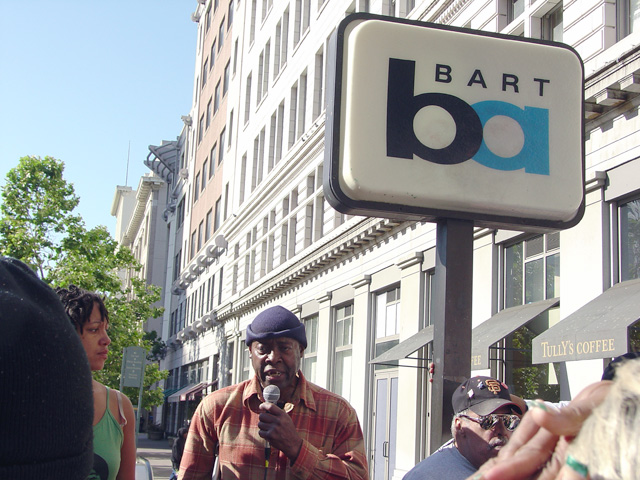 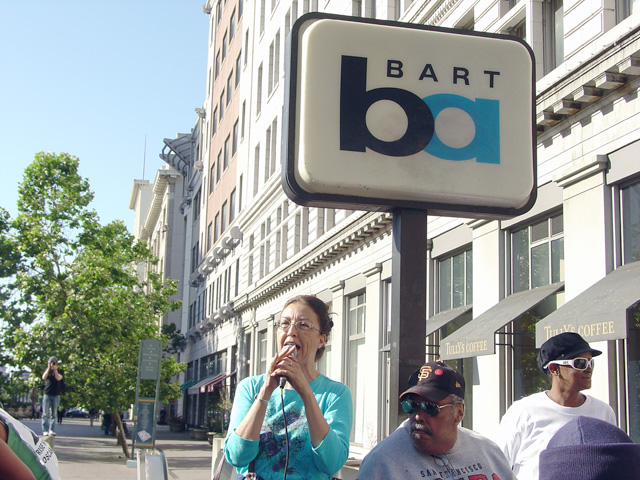 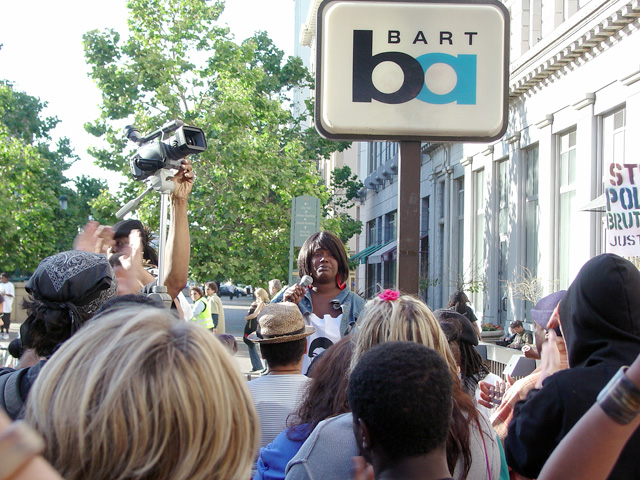 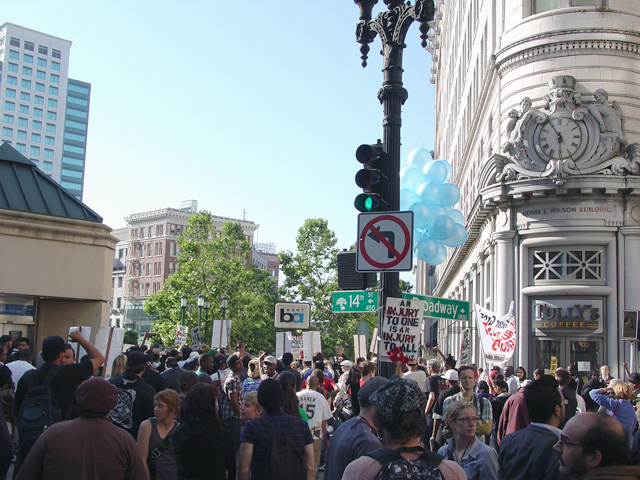