Video of the beginning of the march at Fruitvale BART station, Oakland, CA, June 12, 2011. Following a public press conference, people marched down International Boulevard to downtown, where a rally was held at the corner of Broadway and 14th Street.

Former BART Police Officer Johannes Mehserle was convicted of the killing of Oscar Grant, on January 1, 2009. He was sentenced to two years for “involuntary manslaughter.” Mehserle was released after serving less than half that time.

A strong community movement, with support from the Grant family, are calling for a civil prosecution of Mehserle by the U. S. Attorney General, as in the Rodney King case. They are also pressing for strong civilian review of police, and an end to illegal police killings and racial and youth profiling.

Mehserle is the first uniformed, on duty, police officer to ever be convicted of killing a civilian in the history of California. 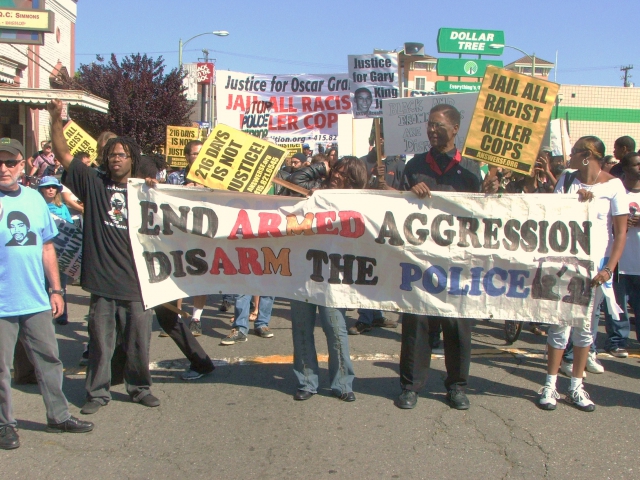 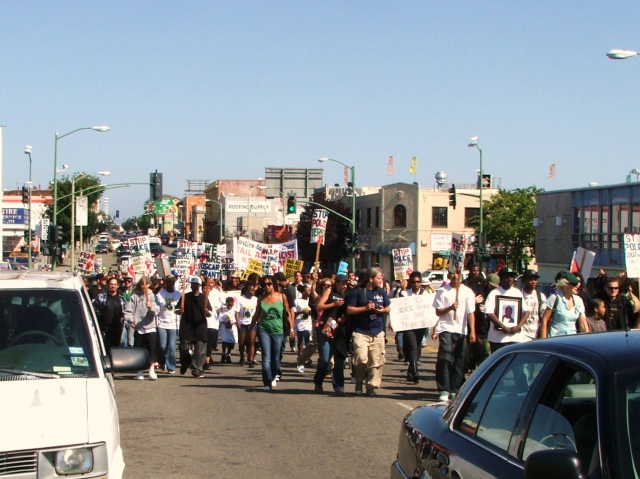 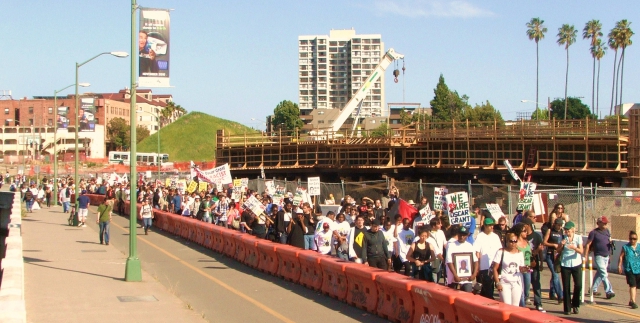 Add a Comment
§thanks John
by helpful
Tuesday Jun 14th, 2011 9:56 AM
Got to see some new faces and what their doing at the protest. thanks for the video John, I wouldn't of noticed them without watching it ;-)

Add a Comment
§Hopefully 6/26 meeting will do some serious self reflection and analysis
by Angelo
Wednesday Jun 15th, 2011 12:54 PM
All deserved credit should go to those who did show up on 6/12. But it has to be asked Why in a City of approx. 390, 000 (in A Bay area of several million ) only approx. 300 people showed up ? Why in a City that, despite large scale movement to the 'Burbs by African-Americans in the last decade , is still 45% African -American there were so relatively few Black men and women on the march ?
Why in a area where the labor movement is so relatively progressive there wasn't even one Union banner present ?
There is no doubt that millions were shocked and outraged by the Murder of Oscar Grant . So why have so few shown that outrage on the streets? (and not just 6/12. After all the largest action early in 2009 was only about 2500-3000 strong )
Hopefully the meeting called for by the Oscar grant coalition on 6/26 at the Humanist Hall will seriously explore these questions .
Add a Comment
§Questions that many have asked
by Foot soldier
Thursday Jun 16th, 2011 10:38 AM
Angelo questions are dead on ! many of us have wondered the same.
Add a Comment
§original WMV video
by Jonathan Nack
Friday Jan 4th, 2019 7:29 PM
Copy the code below to embed this movie into a web page:
Download Video (99.8MB) | Embed Video
original WMV video
Add a Comment
Support Independent Media
We are 100% volunteer and depend on your participation to sustain our efforts!