by Dan Bacher
“The massacre at the pumps pushes already-struggling salmon and native fish populations closer to extinction and is entirely unnecessary,” said Jeff Miller, conservation advocate for the Center for Biological Diversity. “This is a high rainfall year, and there was no need for continued pumping at this level while so many fish were being killed. Excessive pumping and the highest-ever water diversions from the Delta the past decade have crippled Central Valley fish runs, including commercially valuable salmon.”

Photo of splittail, salmon smolt and steelhead before sorting at the Tracy Fish Collection Facility on the South Delta. These are just a few of the over 6 million splittail and 51,000 spring chinook salmon killed in the state and federal pumps this year. Photo by Jim McCarthy. 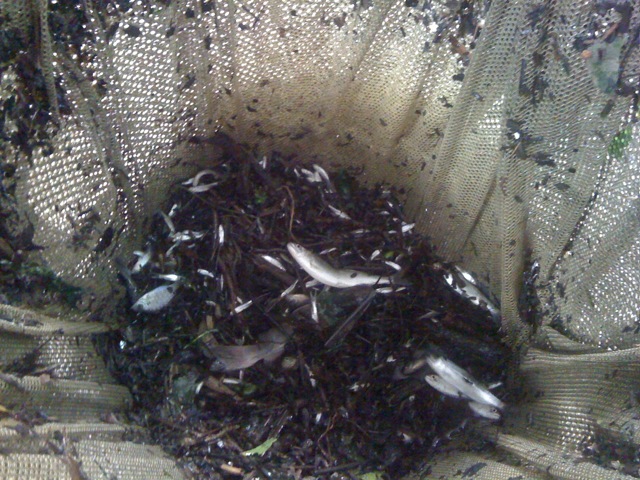 In one of the largest fish kills in California history, new federal data show that the Central Valley Project (CVP) and State Water Project (SWP) pumps in the Sacramento-San Joaquin River Delta have killed more than 6 million Sacramento splittail in the past six weeks and more than 51,000 imperiled spring-run chinook this year.

“Over the past six weeks, the outlook for Sacramento splittail has gone from bad to dramatically worse,” said Jeff Miller, a conservation advocate for the Center. “Delta pumping operations may have wiped out a significant portion of the juvenile splittail in what could have been a good year for rebuilding the population.”

U.S. Bureau of Reclamation data show that the pumps killed 5.9 million juvenile Sacramento splittail in May and another half-million splittail the first week of June. The daily totals of fish "salvaged" in the pumps can be found at: http://www.dfg.ca.gov/delta/data/salvage.

Miller said the splittail were formerly protected as a threatened species but illegally stripped of protection in 2003. The Fish and Wildlife Service last fall made a controversial determination that the species does not warrant protection, despite the fact that numbers of splittail found in annual California Department of Fish and Game surveys have fallen to consistently low levels since 2002, and that the estimated population from 2002 to 2010 has been the lowest recorded since surveys began in 1967.

The massive fish kill at the pumps comes as Republicans in Congress push legislation, HR 1837, to exempt pumping in the Delta from Endangered Species Act protections for salmon and other fish and to block restoration efforts on the San Joaquin River. Representatives Devin Nunes and Tom McClintock, while constantly preaching about the evils of "big government," are in fact the biggest supporters of the big government-funded corporate welfare queens of the San Joaquin!

“The massacre at the pumps pushes already-struggling salmon and native fish populations closer to extinction and is entirely unnecessary,” said Miller. “This is a high rainfall year, and there was no need for continued pumping at this level while so many fish were being killed. Excessive pumping and the highest-ever water diversions from the Delta the past decade have crippled Central Valley fish runs, including commercially valuable salmon.”

The Sacramento splittail (Pogonichthys macrolepidotus) is a minnow native to the upper San Francisco Estuary and Central Valley. Splittail are primarily freshwater fish but can tolerate moderately salty water. They are found mostly in slow-moving, marshy sections of rivers and dead-end sloughs, though floodplains are important for spawning.

Formerly common in the Sacramento, San Joaquin, Feather and American rivers, the splittail has been eliminated from all but a fraction of its former range and now is largely restricted to the Delta, Suisun Bay, Suisun Marsh and Napa Marsh.

The Sacramento splittail was listed as a threatened species in 1999. After water agencies sued over the listing, the Bush administration improperly removed protections for the splittail despite strong consensus by agency scientists and fisheries experts that it should retain protected status.

After conservation groups sued, the Service agreed to revisit the Bush-era decision but denied listing in October 2010. A recent analysis of splittail population trends by the Bay Institute shows that there has been a significant decline in the abundance of splittail during the past several decades.

"The splittail and other native fish species that share its habitat in the Delta and Central Valley are threatened by excessive water diversions, pesticides and other contaminants, and changes to the food web from introduced species," according to Miller. "The splittail is also suffering from loss of floodable habitat area needed for spawning and rearing. The remnant populations of splittail in the Delta require adequate freshwater outflow and periodic floodplain inundation to thrive."

The decline of Sacramento River spring-run Chinook salmon and Sacramento splittail occurs in the context of the overall collapse of Central Valley salmon and Delta pelagic (open water) species in recent years. Since 2005, state and federal scientists have documented the unprecedented collapse of Delta smelt, longfin smelt, threadfin shad, young striped bass and others species, due to increased water exports, increased water toxicity and invasive species.

The Center for Biological Diversity is a national, nonprofit conservation organization with more than 320,000 members and online activists dedicated to the protection of endangered species and wild places. For more information, contact: Jeff Miller, (415) 669-7357.

What can you do to stop the massive fish kill in the state and federal pumps?

First, please contact John Laird, California Natural Resources Secretary, and demand that he take immediate action to stop the killing of millions of Sacramento splittail and thousands of threatened spring run Chinook salmon by the Bureau of Reclamation and Department of Water Resources!

Second, please write a letter to stop Legislation by Rep. Devin Nunes (R-CA) aimed at gutting protections in the Bay-Delta Estuary and blocking the restoration of the San Joaquin River. Go to the Center for Biological Diversity website action alert, "Help Save California's Salmon Runs," http://www.biologicaldiversity.org/action/alerts/.

Related Categories: California | Central Valley | East Bay | Environment & Forest Defense | Government & Elections
Add Your Comments
Latest Comments
Listed below are the latest comments about this post.
These comments are submitted anonymously by website visitors.
TITLE
AUTHOR
DATE
Re: Death delta pumps kill...
Mike Wade
Support Independent Media
We are 100% volunteer and depend on your participation to sustain our efforts!