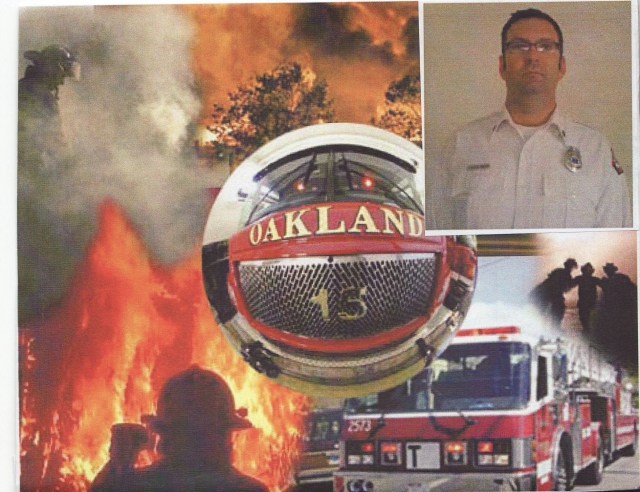 Gillis seeks the recordings via a Public Records Act request made in April 2011 for use in a Civil Service Board proceeding. He claims the recordings support his contention that disciplinary proceedings against him are retaliatory for Gillis’ participation in law enforcement proceedings regarding misconduct against Oscar Grant.

Oscar Grant was killed on January 1st, 2009 at the Fruitvale BART when he was shot in the back at pointblank range by BART police officer Johannes Mehserle.

Oakland Fire was first responder. Questions have been raised by Gillis and others about the treatment Grant received from OFD. Gillis claims OFD has retaliated against him for raising questions.

The timeline is:
On February 3rd, 2011, OFD announced its intent to suspend Gillis.
On March 29th, 2011, Gillis requested the recordings.
On April 15th, 2011, Oakland Fire responded by letter, “There are no audio recordings of any staff meetings at Oakland Fire Department.”
On May 18th, 2011, Gillis filed suit in Alameda County Superior Court for the recordings under the Public Records Act, the Brown Act (Open Meetings), and the Oakland Sunshine Ordinance.
On May 27th, 2011 by letter, OFD admitted it possesses the tapes, but OFD still refused to produce them. OFD now claims the tapes are being withheld to protect Grant’s privacy.

“An absurd excuse coming from the City Attorney,” said Philip Horne, Esq., attorney for Gillis, “and predictable. Our City Attorneys proclaim the benefits of open government, sunshine, and transparency when they are running for office, but once elected, they transform into public records czar’s vainly trying to hide all the state’s secrets. The public needs to know what happened on that platform. What their public servants did and did not do and what the lawyers then did and did not do. ”

http://justiceforseanatoaklandfire@googleg...
Add Your Comments
Support Independent Media
We are 100% volunteer and depend on your participation to sustain our efforts!