Add an Event
Newswire
Calendar
Features
Home
Donate
From the Open-Publishing Calendar
From the Open-Publishing Newswire
Indybay Feature
Publish to Newswire
Add an Event
Related Categories: San Francisco | Environment & Forest Defense
A profound ceremony - the first of its kind in contemporary history to welcome the SALMON.
by Francisco Da Costa
Monday Jun 6th, 2011 6:20 AM
In Northern California once the rivers and even the streams in many parts - saw the passing thru and fro of the almighty - SALMON. As we frail humans began to understand the journey of the SALMON - we, the indigenous people - showered a deep respect on this annual ritual. The fight, up hill - to the spawning rounds, the release of life - and finally the glorious death. All nature participated in this historic episode year after year - for thousands of years. Even, the redwood trees, in all its majestic power and glory - wallowed in the smell and nutrition of the SALMON. The stranger, the creator of the concrete jungle, messed the balance and left the indigenous people, and all of nature that once was pristine - adversely impacted and polluted. Desecrated the SACRED LAND and continues to do so - even today. Aho. 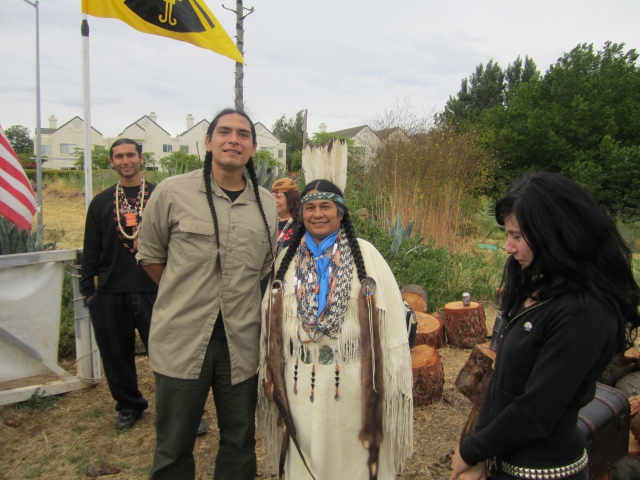 original image (4320x3240)
I have been to Glen Cove many times - and I have heard from the Elders about the many trials and tribulations of the many California Tribes that revered this Cove. The salmon have for thousands of years - visited this Cove - and then made their journey up stream to visit again, spawn, initiate life and die.

The ritual of the salmon, the abundance it brings, has been tied to so many cultural factors and has been the DNA of the indigenous tribes all over Northern California and Northern American - but also far way New Zealand - the land of the Maori.

The Elders and the Shamans once knew what would befall them and took precaution. The timing was prefect but the time has come to reveal the truth - and the truth is not pretty - not so to those that are mundane and continue to disrespect Mother Earth.

The Elders of the many tribes - have spoken to me - and because they have confided in me - I have done what is possible to expose their wisdom to those that do not - comprehend.

Years ago with great difficulty - we brought the leaders, the elders, so that they may address the San Francisco Public Utilities Commission (SFPUC). The authority that uses the Hetch Hetchy water and responsible for the Hetch Hetchy damn - the other rivers and streams where it pumps water from - and from time to time - releases water.

The SFPUC and the authorities behind the Water System Improvement Project (WSIP) has continued to disrespect the First People. If they think they have not - I will explain to them in my speech very soon.

Even, as the visit of the Salmon to Glen Cove and its yearly ritual is welcomed and understood by the indigenous people and other children, women and men of good faith - not so by the greedy, materialistic, evil - stranger whose main goal is hoarding and making money. Taking the resources that Mother Earth gives and use it without judgement and often indiscriminately.

The stranger was responsible for the cutting of the redwoods and there is a relation between the Salmon and the redwood.

The stranger has for years - fished for salmon - without any care, no discernment of what is good - taken so much and adversely impacted an entire region.

The stranger has damed the rivers - taken upon himself to destroy, without even knowing the consequences too deep, too salient, too spiritual for him with his evil ways to comprehend.

The list of what the stranger has done is long - and to fill this page with his misdeeds - is not the purpose of this message.

Yesterday, for the first time in hundreds of years - a ritual was conducted to welcome the Salmon.

Much like some years ago - from a far away Nation the Maori invited the California tribes and revealed to them that they could come and visit the salmon - that the Great Spirit had arranged for a far away Nation - to preserve and keep the Salmon in trust.

Glen Cove in Vallejo is Sacred Land - visited and respected by many California Tribes - that Sacred Land has the blessing and is connected to those that must be respected.

Now, the stranger wants to build some restrooms and a parking lot. If he dares to that - the misery of his bankruptcy and related woes today - will be multiplied a million times. Those that do not pay heed to this warning - can dare the impossible and suffer the consequences.

A revelation that was meant to be so that I could reveal to the world - what indeed in the power of the ritual, the meaning of respect, the keeping of a bond - not written in any language - less that of the stranger the originator of most that is "evil" on this earth.

It has been over two months, now - the Fist People have camped and are protesting that no entity should be permitted to build a parking lot and some restroom - on a Sacred Burial Ground at Glen Cove.

No one has Patrimonial Jurisdiction on that land - except, those First People; those indigenous people that have revered the Sacred Site for thousands of years.

The Native American Graves Protection and Rehabilitation Act (NAGPRA) , the Precautionary Principle, and other mundane laws of the Stranger are in place and can easily be applied.

However, in this case - if anyone dares desecrate the land - now that they have been told and warned - the consequences will be severe.
" No home, no building, will withstand the quake and much like Joplin - nothing much will be left - but death and destruction" - I have spoken.

Every great care was taken to perform the ceremony in keeping with what has been passed from generation to generation by those Indigenous Tribes that understand the Salmon - the Pitt Indian River Tribes.

My role was to be a witness and connect the dots. To see with my eyes the present, the past and reveal certain aspects of the future.

In the year 2011 is it completely wrong to think of desecrating a Sacred Burial Ground.

The Vallejo Council and the Vallejo Recreation and Park Authorities know that what they are doing is wrong.

I told them that at one of their meetings - four years ago. They have an Environmental Impact Report and a General Management Plan that is full of loop holes.

There is no sound leadership in this fake plan - and what is more - given the dire economic straits of the City of Vallejo that is bankrupt - no one should waste money and more try to confront the First People, the California Tribes, and those that respect Sacred Burial Grounds.

The stranger thinks he has his laws - but for thousands of years the Patrimonial Laws of the First People have withstood what cannot be understood by those that are not spiritual.

Leave the Sacred Ground alone - and if you do not - suffer the consequences.

Here are some photographs - look at them and respect the seeings:

http://www.flickr.com/photos/franciscodaco...
Add Your Comments
LATEST COMMENTS ABOUT THIS ARTICLE
Listed below are the latest comments about this post.
These comments are submitted anonymously by website visitors.