Add an Event
Newswire
Calendar
Features
Home
Donate
From the Open-Publishing Calendar
From the Open-Publishing Newswire
Indybay Feature
Publish to Newswire
Add an Event
Related Categories: East Bay | North Bay / Marin | Environment & Forest Defense | Health, Housing & Public Services | Racial Justice
The Glen Cove saga that defies logic and calls for some concrete adjudication - now.
by Francisco Da Costa
Wednesday Jun 1st, 2011 8:07 AM
For years now the First People and leaders such as Wounded Knee, Morning Star, Corrina Gould, Fred Short - others, have been walking from Shellmound to Shellmound, all over the Bay Area - to bring to the notice of all people of good faith - that Sacred Burial Ground have to be respected. Here in the Bay Area these over 500 plus documented Sacred Shell mounds, These Shellmounds must NOT to referred to as MIDDENS. The Shellmounds are not garbage sites. Right now, the on going struggle at Glen Cove - encourages everyone that is decent to take a stand and support the on going protest and vigil at Glen Cove. A short film states the basic issues and introduces the public to some of the local First People, leaders and supporters - on the front line. 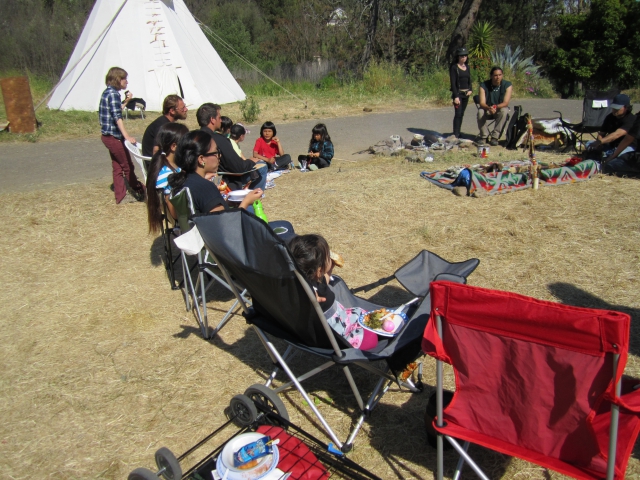 original image (4320x3240)
The City of Vallejo is in deep trouble. Daily you hear reports about Vallejo not having the money to deliver basic services to the constituents of Vallejo. While much has been said about Vallejo declaring "bankruptcy" - few know - why Vallejo really declared - bankruptcy.

Vallejo was taken for a ride by Lennar, a Rogue Developer - that promised the City of Vallejo and some very corrupt Council Members on the Vallejo Council - to build 10,000 homes on Mare Island that comes under the jurisdiction of Vallejo.

After 10 years nothing much happened. Much the same will happen at Hunters Point Naval Shipyard and Treasure Island.

The Vallejo Council still counted on the tax increment from Lennar after years and the 10,000 homes promised to be built.

So, when the City of Vallejo - finally realized it was financially in deep trouble, could not wait anymore for Lennar to build the homes, the City of Vallejo was having serious problems of its own - having counted on the tax increment. Early on jumped the gun, decided early on to give its Police and Fire Department - pay increases - and now not having the money - it was forced to declare - bankruptcy.

People were shocked in the Bay Area - more the thousands that had move to Vallejo and near by area from San Francisco - seeking better amenities and now very sorry for the despicable way the City of Vallejo and its very corrupt Vallejo City Council - has treated those that put faith in the Vallejo City Council and its prevalent - corruption of the highest order.

Right now Vallejo has no money - yet, the Vallejo Recreation Department wants to build some restrooms on Sacred Burial Grounds.

In the interim its schools are in a mess, the Fire Department and Police Department operating at minimum capacity, prostitution galore, the homeless all over the place, less garbage collection, the performance of the Vallejo City Council and its City's operation, pathetic - what else is there to say. Wake up Vallejo - you are the laughing stock of the world and still want to challenge spiritual values - held high and in reverence for thousands of years.

There is a God, that are just laws, the Great Spirit is watching - and you are making a fool of yourselves. Stop thinking with a sordid mind and less with a fork tongue.

18 treaties signed by the First People and the U.S. Government - were signed and not ratified. Today, over sixty percent of the indigenous tribes living in California are not Federally Recognized.

It is a shame that our U.S. Government and the corrupt State Government - saw fit to kill the indigenous tribes and fetch $5 for their scalps. Steal the land, rape the women, kill the children, kill the men, kill the women - and yet call themselves civilized and a Nation of Laws.

Here in California - Governors sent edicts - encouraging thugs, thieves, and rogue to kill the Fist People and claim their land. History has not been kind to the indigenous people and history is NOT kind today. We see this scene unfolding before our eyes, daily - at Glen Cove. Go to the site and witness history repeating itself - in the worst possible way.

This is a shame and people all over the world are wondering what is happening to California.

More to the astute, pretty educated folks in the Bay Area?

Shame on Vallejo and its Council for putting down the First People - the indigenous people of the Bay Area that revere the area - in and around Glen Cove.

I have gone to the site many times - and in recent times joined the protesters to show my solidarity. I have supported the Shellmound Walks to the best of my ability - especially when the Shellmound Walkers make their abode in and around San Francisco. These youth, women, and men that participate in the Shellmound Walk - are truly spiritual persons - that fully understand, what is truly means to respect our ancestors - going back thousands of years. Kudos to all of them and the organizers.

Here is a short film that point to the basic facts and allows the viewers to listen to real indigenous people - expressing themselves:

In the year 2011 - we will not permit the corrupt to bully those that use a fake Environmental Impact Reports to undermine the Spirituality and the Universal Laws of the Indigenous people. The indigenous people have Patrimonial Jurisdiction - something the Strangers do not comprehend less understand.

Thank God for leaders like Wounded Knee, Corrina Could, Fred Short, Mark Anquoe, Morning Star - each of them can stand their ground and will - with support, of thousands of children, women, and men of good will - make good things happen.

This matter linked to Glen Cove can and must be resolved with the true parties on the table adjudicating the factors at hand - on terms that are agreed upon by those that revere the Glen Cove site that is a Sacred Burial Ground. This site must not be desecrated.

We look forward to justice and fair play.

W look forward to a meaningful dialog - including the organizations and institution that pretend to protect Indigenous Sites and related factors - but do not.

Those that read the Native Americans Grave Protection and Rehabilitation Act (NAGPRA) - mostly do only that - but, when the time comes to adjudicate - insensitive and unethical folks use every ploy and machination to put down the indigenous people.

The First People of the area be they the Ohlone, Miwok, others that do not have to be told - what is Sacred and what is not - fully comprehend what is going on. The holy fire has been lit and prayers said every day at the site at Glen Cove - these powerful prayers will protect those that believe in justice.

For those that think otherwise be prepared to deal with Karma.

This matter becomes all the more sordid - when folks that are immoral, lack standards, have no clue about ethics, want to take on the First People that have practiced sound spiritual values for thousands of years. The Great Spirit , Mother Earth, the protection of Sacred Sites, are inherent in all indigenous people. Not so the stranger with a fork tongue.

We cannot say that of folks and in a more clearer manner - that are materialistic people, mundane, lacking any goodness - when it comes to Mother Earth.

Concrete jungles, lack of compassion, greed and materialistic inclinations - point to the strangers and the evil that exists on this Earth.

I have just come back from Washington D.C. having visited the Library of Congress, Museums of the American Indians, and other so called landmark and historic buildings with contents that must speak to the truth but do not.

In the year 2011 the disdain for the indigenous people could not be more profound - this is shown clearly by the Vallejo Recreation authorities that are now challenging the power that are beyond them.

The Vallejo City Council better see the light - and leave the Sacred Burial Ground - long recognized, revered and visited for thousands of years by indigenous tribes - much before any stranger more from European origins set their foot on Turtle Island.

Shame on those authorities on very level that defy logic, justice, compassion, and seek corruption and greed to foster their fake projects and ploys.


Francisco Da Costa
Director
Environmental Justice Advocacy
http://www.indybay.org/newsitems/2011/05/3...
Add Your Comments
Support Independent Media
We are 100% volunteer and depend on your participation to sustain our efforts!