Add an Event
Newswire
Calendar
Features
Home
Donate
From the Open-Publishing Calendar
From the Open-Publishing Newswire
Indybay Feature
Publish to Newswire
Add an Event
Related Categories: U.S. | Media Activism & Independent Media
9/11 Revelations - Shattering Myths, Identifying Reality, Empowering People
by Carol Brouillet (cbrouillet [at] igc.org)
Sunday May 15th, 2011 11:18 PM
Do you believe the official proclamation of the execution of Osama Bin Laden? Do you believe that he masterminded 9/11? Do you believe the official narrative of 9/11? Do you recognize any similarities between the novel by George Orwell entitled "1984" and the "War on Terrorism?" Despite ridicule, a growing truth movement exists in the US and the world challenging the official story and US foreign and domestic policies. In the Bay Area, the truth movement continues to speak out, hold events, raise questions and seek answers. 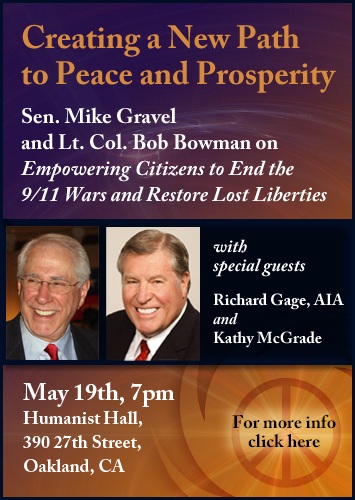 On the morning of September 11, 2001, I was shocked and stunned by the events that took place. I stopped watching TV when I was young, but on that day I turned on the television to watch the unfolding drama early in the morning, as I was preparing the children to go to school. The media coverage more than the events frightened me the most, as I heard the drums of war beating loud and clear. Truth is the first casualty of war. The bizarre, surreal aspects of 9/11 made me wonder if it was a black operation of some kind. I had become an activist after seeing the film, JFK and discovering over a hundred books on the topic, many on the covert activities of the C.I.A.. 9/11 seemed to follow the same pattern of the classical special operation described by Mr. X (Depicted by Donald Sutherland in the film by Oliver Stone, based on the real Fletcher Prouty who was a liaison between the President and the C.I.A..( See The Secret Team) He described the failure of the normal defense procedures, the removal of key people who could have interfered with the operation, such as himself who had been sent out of the way, the cover story that was widely disseminated, even before the event was concluded, the systemic destruction of evidence, the cover-up. A similar pattern was seen on 9/11, the stand-down of the military, the absence of key people, the quickly released accusations, the framing of the attack as an act of war, the destruction of evidence, and the cover-up.

On the first day of May, Obama made his dramatic announcement about the death of Bin Laden. Time Magazine came out with a cover story showing Obama with a giant red X across his face (An echo of earlier covers depicting the demise of Hitler, also on May 1st (See Reflections on the official announcement of the death of Osama Bin Laden by Thierry Meyssan). The surreal story, like the story of Pat Tillman and Jessica Lynch began to fall apart rapidly, the “corrections” were issued as the weakest fabrications disintegrated. (See- The killing of Osama bin Laden: how the White House changed its story by Robert Booth). A new fake Osama Bin Laden video was released (An obvious fraud for those who chose to scrutinize it, see - Osama bin Laden’s Nose and Left Ear by Joe Quinn). Goebbels noted of the British “When one lies, one should lie big, and stick to it… even at the risk of looking ridiculous.” Hitler believed “People will believe a big lie sooner than a little one; and if you repeat it frequently enough people will sooner or later believe it.”

The battle over the public mind continues. (See Who really killed Bin Laden - and why? and excerpts from Secrets of the CIA.) I was bombarded by inquiries in the wake of Obama’s announcement, as well as a barrage of articles. One of the most respected researchers on 9/11 had written a book entitled Osama bin Laden: Dead or Alive? (See- Obama Says "Justice Has Been Done": Bin Laden Scholar Says No. There had been numerous reports about Osama bin Laden’s death over the years (See Osama bin Laden was NOT Killed in early May, 2011. He Died Over Nine Years Ago. by David Kimball), as well as reports that there was no hard evidence against him for the crime of 9/11, and that the multiple confession and other video and audio emissions were fake. Although Osama bin Laden was the poster boy for the "War on Terror" and the "War on Afghanistan," Saddam Hussein became the poster boy for the "War on Iraq." The vast majority of the soldiers who went to Iraq were deceived into believing that Hussein had something to do with the 9/11 attacks.(See US Troops Want Out Of Iraq Within Year & The Man Who Sold the War - Meet John Rendon, Bush's general in the propaganda war.)

I witnessed the destruction of evidence, the cover-up, and have sifted through increasing amounts of information and data regarding the many aspects of 9/11 over the course of nearly ten years. I suspect that there is an ongoing attempt to confuse the researchers, as well as the public, to paralyze them into inaction and draw attention away from analyzing the basic questions about 9/11- Who had the means, the motive? Who benefited? Who had the ability to cover it up?

Those who have raised the hard questions have been marginalized, vilified, ignored, branded as conspiracy theorists, crazy, paranoid; some people have lost their jobs. Some of the witnesses who were in New York City have lost their health and their lives. Despite the challenges, the threats, the risk of public ridicule, an enormous effort has been expended by researchers, activists, authors, scientists, architects, engineers, filmmakers, journalists, firefighters, mothers, fathers, sisters, brothers to understand the events of 9/11, to seek the truth, to obtain justice, to avert imperial wars. Amongst the more prominent former officials to advocate for a genuine investigation are former Senator Mike Gravel and Lt. Col. Robert Bowman. They will be speaking in Oakland on Thursday, May 19th, at 7 pm at the Humanist Hall, along with Richard Gage, AIA, founder of Architects and Engineers for 9/11 Truth, and Kathy McGrade, an engineer whose company is devoted to safe firefighting equipment and has publicly challenged the official NIST (National Institute for Standards and Technology) explanations for the destruction of the three World Trade Center buildings that were completely destroyed on September 11, 2001. The scientific research (Active Thermitic Material Discovered in Dust from the 9/11 World Trade Center Catastrophe) published by an international group of scientists is a damning look at evidence that was criminally ignored by NIST (The National Institute for Standards and Technology), and completely omitted from the 9/11 Commission Report. A growing wave of people within the U.S. and throughout the world are recognizing the Orwellian nature of the explanations, statements, actions of the US government that threaten the lives and liberties of people at home and abroad. Perhaps the most difficult question to be raised is “What can people do to rectify the current situation?” which is the theme of the upcoming event- “Creating a New Path to Peace and Prosperity - Senator Mike Gravel and Lt. Col. Bob Bowman on empowering citizens to end the 9/11 wars and restore lost liberties.”

Former Senator Mike Gravel and I discussed this on last week's Community Currency radio show, posted at the Progressive Radio Network Archives. Kathy McGrade and I will also be speaking about 9/11 Truth on the May 19th, 2pm -3 pm, Community Currency Show on the Progressive Radio Network. Dennis Bernstein, Bonnie Faulkner, along with Peter Phillips and Mickey Huff, from Project Censored will also be doing a 9/11 Special on KPFA from noon to 3:30 pm on May 19th.

http://www.communitycurrency.org/node/147
Add Your Comments
Support Independent Media
We are 100% volunteer and depend on your participation to sustain our efforts!