Add an Event
Newswire
Calendar
Features
Home
Donate
From the Open-Publishing Calendar
From the Open-Publishing Newswire
Indybay Feature
Publish to Newswire
Add an Event
Related Categories: Americas | San Diego | Drug War | Police State & Prisons
"No More Blood" Tijuanese Demand!
by Rocky Neptun (rockyneptun [at] gmail.com)
Monday May 9th, 2011 9:44 AM
As part of a national movement; protestors, both young and old, are calling for “peace” between the government and the cartels. Over 30 Mexican cities in the last week have seen protests over the continuing drug war, most urging Calderon to sign an agreement with cartels which ends the militarization of anti-drug efforts. 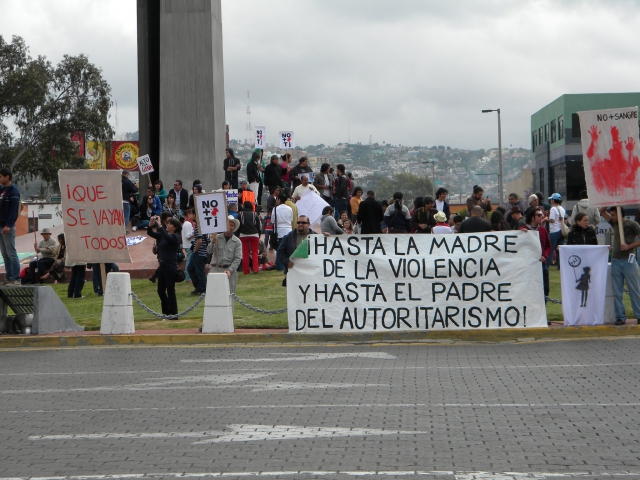 original image (2048x1536)
Maria Sanchez stood silently, leaning on her daughter, holding an enlarged photo of her son in trembling hands. He had been shot so many times in the face she could only identify his body by tattoos. Andrea, sister to a slain policeman and wife to a motorcycle cop, held a sign which read “no mas sangre.”

Families of victims and concerned older citizens held signs and gave speeches which simply called on the government to “alto a la Guerra.” Over 28,000 people, mostly youth, have died since Calderon began his 2006 intensified campaign, with U.S. backing and funds, to attack the drug cartels. Tijuana’s demonstration was part of a national effort led by Mexican poet Javier Sicilia, whose son was tortured and killed last week. Sicilia's 24-year-old son was found dead on March 28, crammed into a car with six other bodies in Cuernavaca. Masking tape was wrapped around their head, faces, wrists and ankles. Sicilia has said his crusade to demand justice is not just about his son."There are many dead and there is much pain, these citizens have the same dignity as my son," he said in a recent interview. “We have to make it clear to authorities that we don’t want one more destroyed boy, a boy fallen to the corruption of violence and idiocy. We don’t want one more boy corrupted by drug trafficking or by organized crime or as the by-product of organized crime.”

About half of Tijuana’s demonstrators were young people who were taking a new tact in their movement by not only calling for the legalization of all drugs in Mexico but calling Calderon “a puppet of the United States” and equating its drug war as an “arm of the imperialist north.” They carried signs which read “fuera agentes imperialistas” in Spanish and “Gringos go home” and “US agents out now” in English.

Mexican Drug War Enriches the Politicians, Generals and is Leading to a Fascist State

As part of a national movement; protestors, both young and old, are calling for “peace” between the government and the cartels. Over 30 Mexican cities in the last week have seen protests over the continuing drug war, most urging Calderon to sign an agreement with cartels which ends the militarization of anti-drug efforts. Many Mexican leaders, including ex-President Vicente Fox, have called for the full legalization as a way to end the carnage. "Legalizing in this sense doesn't mean that drugs are good or don't hurt those who consume," Fox said. "Rather, we have to see it as a strategy to strike and break the economic structure that allows the mafias to generate huge profits in their business."

As someone who has lived in Mexico for over 10 years and knows many neighborhood cops, officers on Tijuana’s dangerous streets, I can tell you what they tell me – Mexico’s drug war is a fake. It is a pretend operation to suck hundreds of millions of U.S. dollars into the hands of the elite which owns 80 percent of the country. It is also being used to create an elite force, a secret police, paramilitary units, which will guarantee that the present oligarchy and their families will stay in control far into the future.

U.S. taxpayer dollars will be used to attack union organizers and teacher unions, as they did in Oaxaca several years ago, as well as pay for the murder of journalists and human rights advocates. Local police officers tell me the farce of a simulated “war on drugs” stretches from city hall to the Mexican White House, Los Pinos, where Calderon is under the pay of the Sinaloa Cartel.

From 2008 to 2010, the U.S. government has dumped $1.3 billion into the hands of generals and politicians and President Obama is requesting another $310 million for 2011. This program of aid, known as the “Merida Initiative” is more of a bribe, “la mordida,” than anything else and the people of Mexico know it. It is a kickback to the politicians to pretend that they are fighting drugs so that United States citizens will think that their government is actually doing something. Over a billion given – yet there is no accountability, no benchmarks for success. So far Calderon only spends about $70 million a year on anti-drug efforts – where does the rest go?

Politicians, the media and most of the corporate owned leadership in the United States supports and funds the failed drug war in Mexico; its militarized social fabric, institutional oppression and suppression of youth, because to do otherwise would draw attention to its own insane, ideological driven drug war – mostly a war on the poor. Albert Einstein once declared, “The definition of insanity is doing the same thing over and over again and expecting different results,” which is what our government expects us to believe in. Tens of thousands of Mexicans have been sacrificed on the cross of U.S. idiosyncrasy about drug use; their children murdered and maimed, their neighborhoods militarized, forced displacement and their social and health funding needs diverted into helicopters, armored vehicles and salaries to make generals and politicians millionaires.

We in the United States are Mexico’s problem. Until we take to the streets, the airways and the ballot box to force Washington to end its owned failed war on drugs – which only serves to keep the price of drugs high and profitable – more Mexican youth, from the national poet’s son to the seamstress’ schoolboy will be slaughtered, more hardworking policeman will be caught in the cross fire and the corrupt, hypocritical elite will continue to pocket our dollars.

Meanwhile, at last Sunday’s demonstration; as hundreds of cars honked their support in one of the Tijuana’s busiest roundabouts; the cold, damp wind gave a somber cast to the mourning families and angry youth, decked in t-shirts with imitation blood and shouting pleas for an end to the drug violence and the hoax which creates it. 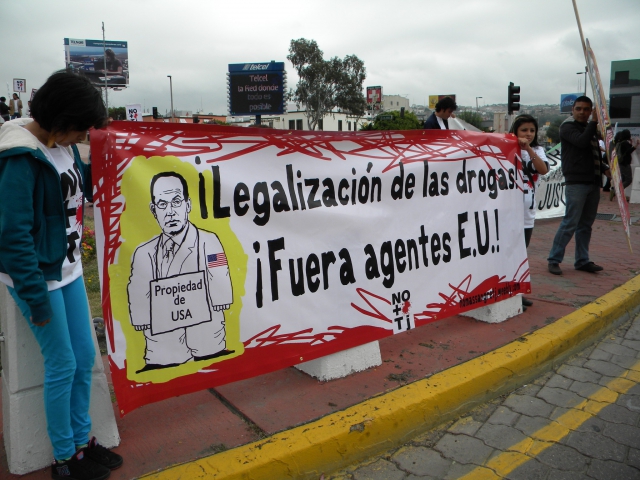 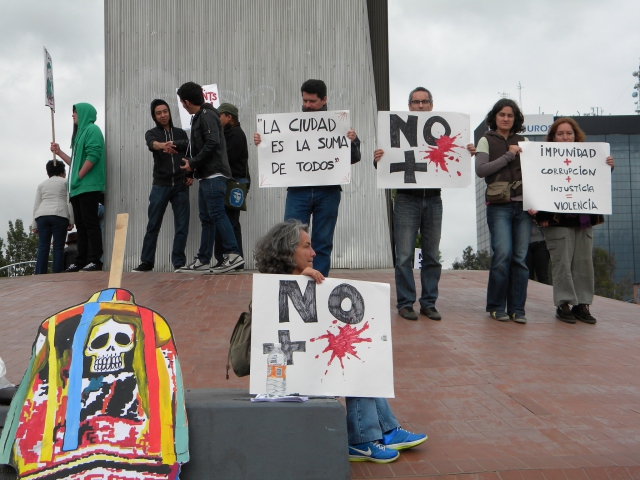 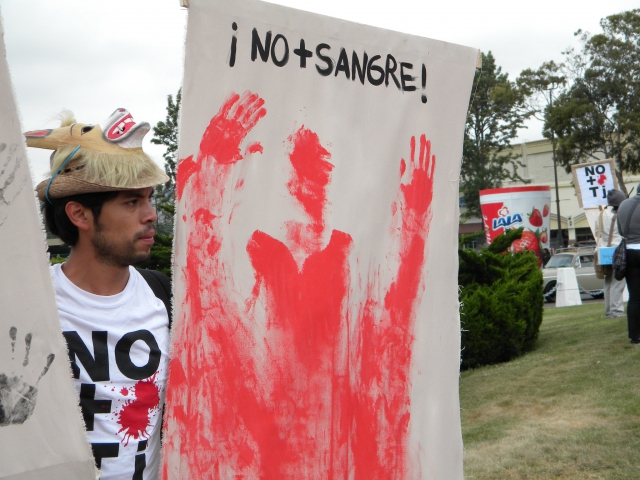