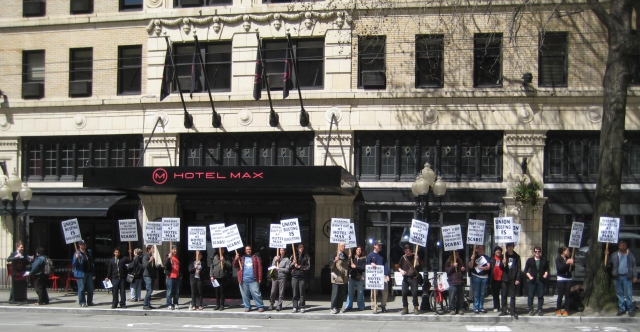 original image (2474x1284)
A non-traditional alliance of workers in Portland and Seattle organized a Day of Solidarity with Hotel Frank Workers last Friday, April 29. The Portland Industrial Workers of the World (IWW), the Seattle Solidarity Network, and Hotel Frank workers were all on the streets picketing Provenance hotels. Provenance is the hotel management company that threw the UNITE HERE Local 2 contract at Hotel Frank in the trash almost a year ago.

In Portland, the IWW picketed Hotel Lucia. Provenance has its headquarters in Portland, as well as two upper-crust boutique hotels, Hotel Lucia and Hotel deLuxe. The IWW has a long history as a militant and radical labor union, often credited with popularizing the slogan and philosophy that “An Injury to One is An Injury to All.” That was certainly the spirit in evidence when they set up their picket line last Friday. You can see a short video of the action here.

In Seattle, the Seattle Solidarity Network (SeaSol) picketed Hotel Max, another high-end Provenance boutique hotel. SeaSol, founded in 2008, is a much younger organization than the IWW, but has already established a reputation for organizing successful campaigns for workers and tenants’ rights. They can mobilize an impressive number of people, and did just that on Friday.

And in San Francisco, Hotel Frank workers held our regular Friday afternoon picket. Hotel Frank workers declared a boycott of the hotel last September. Since then we have staged an escalating series of actions aimed at restoring our Union contract, including active picket lines and unannounced delegations to management.

Last Saturday, the day after the tri-city action, we set up a loud picket line at Hotel Frank at 7 AM on Saturday morning, rousing the guests out of their beds a bit earlier than they were expecting, prompting a flood of complaints by guests to the beleaguered managers. Union-busting companies and guests who cross picket lines reap what they sow.

We are the room cleaners, front desk hosts, bellmen, housemen, laundry and maintenance workers who have worked at Hotel Frank for 10, 20 even 30 years. Most of us have worked at the hotel since it was the Maxwell Hotel, and before that the Raphael Hotel. Hotel Frank is a small hotel just off Union Square. We have had a Union contract for nearly 40 years.

But in May, 2010, Wells Fargo bank bought the hotel in a foreclosure sale. The bank brought in a new management company, Provenance, and declared our contract null and void. Since then, it has been one travesty after another.

The room cleaners are cleaning many more rooms, often skipping their breaks out of necessity, and suffering debilitating injuries to boot. Everybody works an extra half-hour per day for free. Staffing has been cut to the bone. There has been no agreement about medical coverage or pensions. And the hotel has fired Union activists, including myself, and disciplined workers on frivolous and discriminatory charges. We are waiting for a decision by a National Labor Relations Board (NLRB) judge on a trial instigated by the NLRB on numerous violations of federal labor law by the hotel.

All the San Francisco hotel contracts expired at the end of 2009. Since then, Local 2 has been waging a series of battles against the big hotel bosses. Recently the Union won a series of contracts, including the Hilton, the Westin St. Francis, the Palace, the St. Regis, the W and the Fairmont.

But the situation at Hotel Frank is unique. Workers at other hotels where there has not yet been a settlement are working under the terms of their expired contracts, preserving some semblance of work rules, rights and benefits, although without any raises since 2009. At Hotel Frank, there is no contract, no rules and no grievance procedure. Nevertheless, Hotel Frank workers battle on. Local 2 is a Union that doesn’t quit. We know we will win in the end. In the meantime, however, the road is hard.

Provenance, the new management company, is based in the Northwest, which is why the Portland IWW and the Seattle Solidarity Network got into the act. In addition to Provenance’s two hotels in Portland and the one in Seattle, they also run Hotel Murano in Tacoma, Washington, and Hotel Preston in Nashville, Tennessee.

Provenance is in turn owned by Aspen Capital. Both companies are based in Portland. The CEO of both Provenance and Aspen Capital is Gordon Sondland. Sondland sits on the Oregon Governors Economic Advisory Board and the Governor’s Office of Film and Television, chairing the Portland Art Museum, and serving on several corporate boards.

Last December, Wells Fargo sold the hotel to another financial speculator, AEW Capital Management, based in Boston, Massachusetts. AEW kept Provenance on as the management company, which has continued their anti-worker campaign unabated.

Hotel Frank workers have dug in, have stayed strong, and remain very solid and united. “This is a small group of workers facing a big bully,” said Maria Guillen of Jobs with Justice.

Lately the hotel calls the police every time we set up our picket line, but so far the only action the police have taken is to arrest an out-of-control guest who took a swing at me.

The solidarity of workers in Portland and Seattle is, of course, music to our ears. And the support we have received from other workers and community folks on our picket lines keeps us going day-by-day.

YOSHI’S UPDATE: Those who have been following this story know that Yoshi’s, a prominent San Francisco jazz club, has been sending its out-of-town musicians to cross our picket line and stay at Hotel Frank. Most of the musicians we talk to are not happy about this, yet Yoshi’s refuses to make a commitment to do the right thing. Recently, Sweet Honey In The Rock decided not to stay at Hotel Frank. Unfortunately, Leon Redbone did stay at the hotel. We are waiting to see what the Manhattan Transfer does this week. Next week Roy Rogers (the blues guitarist, not the cowboy) is coming to town, and he has told us he won’t be crossing any picket lines. Yoshi’s, are you listening?
http://www.HotelFrankSF.info
§Portland IWW at Hotel Lucia (4-29-11)
by Marc Norton
Thursday May 5th, 2011 8:30 AM 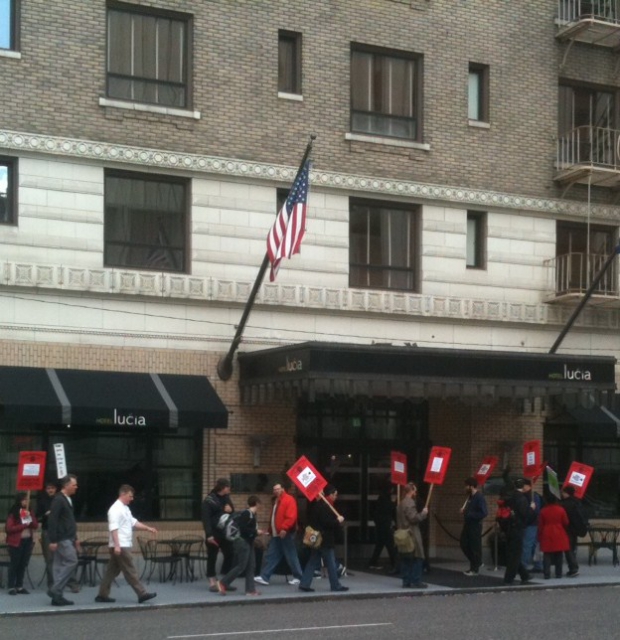 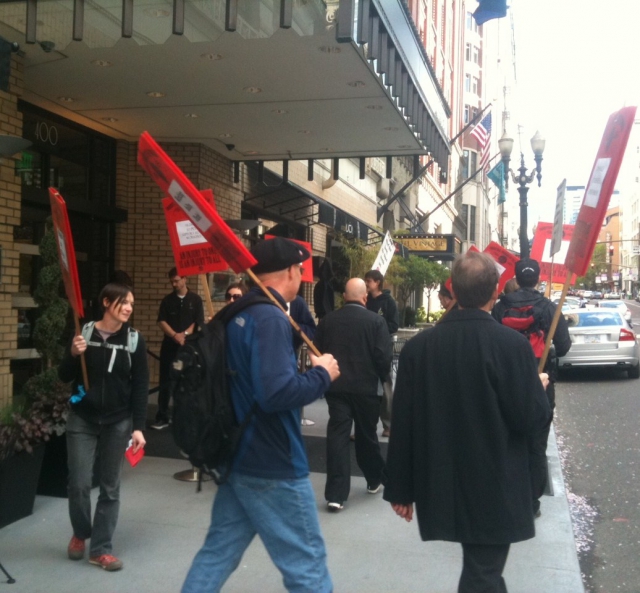 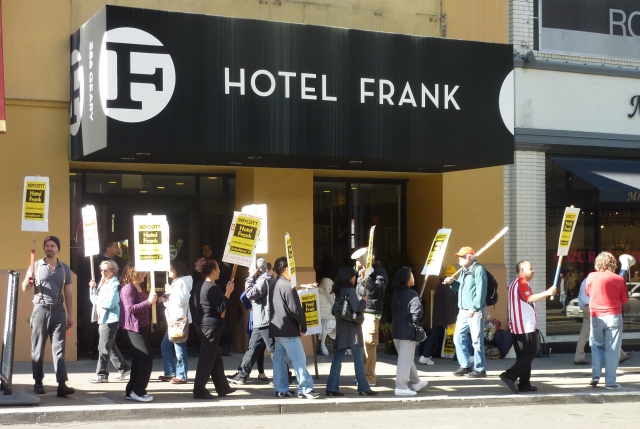 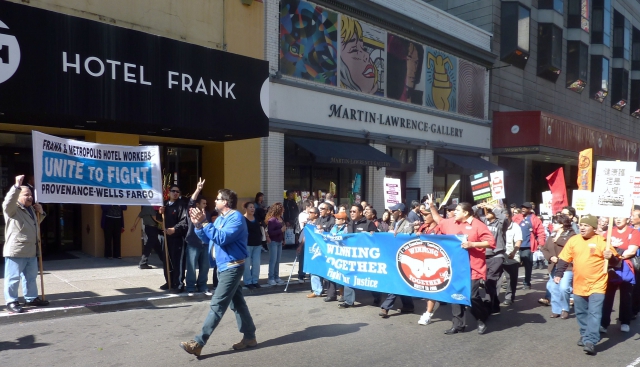 original image (3644x2094)
http://www.HotelFrankSF.info
Add Your Comments
LATEST COMMENTS ABOUT THIS ARTICLE
Listed below are the latest comments about this post.
These comments are submitted anonymously by website visitors.