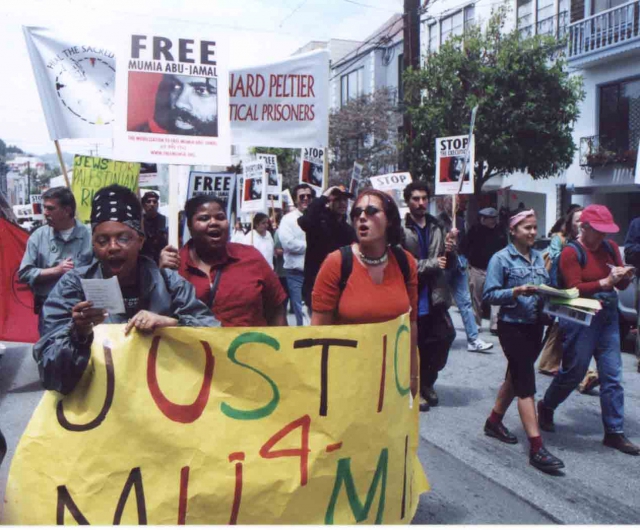 The U.S. Court of Appeals for the Third Circuit in Philadelphia ruled today (April 26, 2011) that the world-reknown and innocent 29-year death row inmate Mumia Abu-Jamal must receive either a new sentencing hearing within six months or have his 1982 jury-imposed death penalty sentence reversed and instead be incarcerated for life in the general prison population without possibility of parole.

Jamal, 58, was framed-up for the 1981 murder of Philadelphia police officer, Daniel Faulkner, despite massive evidence that he had nothing to do with Faulkner's murder. An award-winning journalist at the time and today a leading critic of U.S. racist, anti-working class and imperialist policies, Jamal is the author of nine books. His weekly news commentaries are published in radical and social justice newspapers around the world, Mumia, as is is known to his friends and supporters, has become an international symbol of opposition to the racist and classist U.S. criminal "justice" system which today incarcerates some 3500 mostly poor people, the majority Black and Latino in its growing death row institutions and 3.5 million in its increasingly for profit and near slave labor prison-industrial complex. An astonishing 7 million people are today in U.S. prisons or under the jurisdiction of the system's various institutions.

The Third Circuit's decision reaffirmed its own 2008 ruling on the same issue as well as the original 2001 decision of Federal District Court Judge William H. Yohn. Both found that the sentencing instructions presented to Mumia's jury in 1982 by "hanging judge" Albert Sabo violated the Eight Amendment to the U.S. Constitution and the U.S. Supreme Court's precedent-setting case, Mills v. Maryland, wherein the court ruled that flawed jury instructions akin to Sabo's were unconstitutional.

Sabo instructed the jury during the sentencing phase of Mumia's frame-up murder trial that they must be unanimous with regard to each possible mitigating circumstance in order to determine whether such mitigation could later be considered in weighing whether or not to impose the death penalty versus life imprisonment without parole.

Sabo's instructions, and the associated written forms that jurors were given while deliberating Mumia's sentence, essentially implied that a single juror had the right to exclude from consideration any mitigating circumstance. The Third Circuit disagreed and reaffirmed its 2008 ruling that a single juror may find a mitigating circumstance that in his or her view outweighs all aggravating circumstances. This alone would be sufficient to prohibit a death penalty sentence and require a sentence of life imprisonment. This eventuality assumes, of course, that the jury first finds the defendant guilty by unanimous vote.

Mumia's trial was a legal, political and racist atrocity, so much so that human rights organizations and labor and social justice groups from Amnesty International, the NAACP and the California Labor Federation to the European Parliament and thousands of labor unions and internationally prominent individuals around the world condemned it and demanded Mumia's freedom and/or a new trial.

As the case wound its way through the criminal "justice" system, a series of gross violation of Mumia's legal rights, accompanied by the blocking from consideration of direct evidence of innocence, was systematically employed to march Mumia toward the death chambers at his maximum security SCI Greene prison in rural Pennsylvania, where is has been held in a tiny and isolated cell on death row for almost three decades.

The mind-boggling resort to spurious interpretations of the "law" – "innocence is no defense" – and the passage of new laws that make the presentation of evidence of innocence virtually impossible, brought to light the government's "Mumia Exception" policy wherein the law "in all its majesty," applies fully to everyone, EXCEPT Mumia.

Such was the case with the infamous 1996, Clinton-signed, Anti-terrorism and Effective Death Penalty Act (AEDPA) that for the first time in seventy-plus years held that the findings of "fact" of state courts had to be granted a "presumption of correctness" by federal appeals' courts. This law, applied early on in Mumia's Federal District Court hearing, effectively eliminated the historic habeas corpus (right to appeal) foundation of the original U.S. legal system. Prior to AEDPA some 40 percent of state court convictions in capital cases were reversed on appeal, usually based on findings of police corruption, planting of evidence, intimidation of witnesses and incompetent counsel, all of which were grossly operative in Mumia's 1982 frame-up trial. Under the AEDPA, they were effectively excluded from consideration on appeal and the findings of Judge Albert Sabo ("I'm going to help 'em fry the n----r" Sabo), aided by the AEDPA, were allowed to stand unchallenged.

When the above-quoted statement made by Sabo immediately prior to entering the courtroom to preside over Mumia's case, was introduced in court as evidence of bias, the assigned Judge Pamela Dembe crudely ruled that however reprehensible such a statement might be, "there was no evidence" of Sabo bias "during Mumia's trial!" This in the face of more than 100 rulings against motions presented by Mumia's legal team and virtually none against the prosecution! This in the face of Mumia being physically excluded from the courtroom for a majority of his own trial! And this in the face of key prosecution witnesses being threatened with imprisonment unless they falsely testified against Mumia!

The court's decision today, reaffirming its previous 2008 decision on the exact same issue, was a product of the U.S. Supreme Court's intervention at the request of Pennsylvania prosecutors. The high court of essentially reactionary jurists selected by the representatives of the ruling rich, cited their earlier ruling in the infamous January 2010 case of Smith v. Spisak, where the court ruled against a self-confessed Nazis triple murderer who sought relief by citing the improper jury instructions of an Ohio trial judge. Using this ruling the Supreme Court remanded Mumia's case to the Third Circuit with instructions to reconsider its previous ruling in light of its new Spisak decision, the latter, in the tradition of reactionary "states rights" rulings aimed at opening the door to Mumia's execution. The refusal of the Third Circuit to do so on April 26 sets the stage for yet another appeal by Pennsylvania district attorneys to the U.S. Supreme Court, a decision that Philadelphia District Attorney Seth Williams pledged today to mount.

In truth, however, the resort to the Supreme Court by Pennsylvania authorities has less to do with a final shot at "legally" reversing a decision made against Philadelphia's persecutors in three separate rulings than it does with abiding by the order it has repeatedly fought, that is, to grant Mumia a new sentencing hearing. While formally a new jury in such a hearing would be prohibited from reversing the previous "guilty" verdict of the 1982 jury, it would be compelled to hear evidence of innocence in Mumia's case that had previously been banned or suppressed by Judge Sabo and his cohorts in the frame-up system that places millions of poor people, mostly Black and Brown, in prison with little or no recourse.

Here Mumia's would-be District Attorney murderers would be compelled to suffer the humiliating possibility of a jury that just might refuse to render any sentence at all against Mumia after being presented with the massive evidence of his innocence and after the full force of Mumia'sframe-up is finally revealed. Better to have the Supreme Court murder Mumia than to be frontally exposed by a jury as being integral to the criminal frame-up of an innocent man!

Should the Supreme Court refuse to do DA Seth Williams' dirty work, many observers estimate that Williams and his associates, with prodding from above, will chose the lesser of the two perceived evils before it. That is, they will cease efforts to murder Mumia through the legal system and accept his ordered life imprisonment sentence without parole. The public exposure of the 29-year and ongoing frame-up Mumia Abu-Jamal would pose an unacceptable risk to the very credibility of an already fundamentally flawed system.

Jeff Mackler is the Northern California-based Director of the Mobilization to Free Mumia Abu-Jamal.

--For background information see the website of The Mobilization to Free Mumia Abu-Jamal at http://www.free-mumia.org

Mumia's birthday was April 24. Send him a note of solidarity to:

Mumia Abu-Jamal is an award-winning journalist who chronicles the human condition. He has been a resident of Pennsylvania’s death row for twenty-nine years. Writing from his solitary confinement cell his essays have reached a worldwide audience. His books "Live From Death Row", "Death Blossoms", "All Things Censored", “Faith of Our Fathers”, “We Want Freedom”, and “Jailhouse Lawyers” have sold hundreds of thousands of copies and been translated into nine languages. His 1982-murder trial and subsequent conviction has been the subject of great debate.

Below is the Third Circuit's April 26 decision.

FOR THE THIRD CIRCUIT

“Accordingly, the Pennsylvania Supreme Court failed to evaluate whether the complete text of the verdict form, together with the jury instructions, would create a substantial probability the jury believed both aggravating and mitigating circumstances must be found unanimously. See id. For these reasons, the Pennsylvania Supreme Court’s application of Mills was objectively unreasonable.

"For the foregoing reasons, we will affirm the District Court’s grant of relief on the mitigation instruction claim. As the District Court noted, the “Commonwealth of Pennsylvania may conduct a new sentencing hearing in a manner consistent with this opinion within 180 days of the Order accompanying this [opinion], during which period the execution of the writ of habeas corpus will be stayed, or shall sentence [Abu-Jamal] to life imprisonment.” Abu-Jamal, 2001 WL 1609690, at *130."
http://www.free-mumia.org
Add Your Comments
Support Independent Media
We are 100% volunteer and depend on your participation to sustain our efforts!