Add an Event
Newswire
Calendar
Features
Home
Donate
From the Open-Publishing Calendar
From the Open-Publishing Newswire
Indybay Feature
Publish to Newswire
Add an Event
Related Categories: California | Drug War | Health, Housing & Public Services | Police State & Prisons
A year later... we still miss Jack Herer... R.I.P. Old Friend
by via Cannabis Warrior
Friday Apr 15th, 2011 10:13 AM
Jack virtually created the cannabis movement as we know it today. His infamous bus tours of the 80’s and 90’s spawned activists from across the nation to take up the cause. His book inspired people to not think of themselves as criminals, but crusaders in a fight for truth and justice. His welcoming presence created opportunities for people to learn about this incredible plant and Jack was always ready to teach. 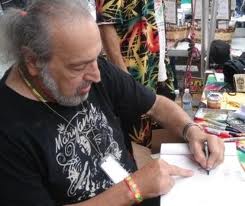 On April 15, 2010 at 11:17 a.m. the cannabis movement lost a great leader and friend, as Jack Herer was pronounced dead in Eugene, Oregon. Cannabis has never has a more staunch advocate or dedicated soul to carry the torch of freedom. Everywhere you look in this great movement Jack is present. His influence has surpassed generations and he is a legend that will live forever. It is amazing to think of the many roads Jack traveled for the past decades educating people about hemp and cannabis. His book Emperor Wears No Clothes has sold hundreds of thousands of copies and has motivated activists around the globe to be active voices in the fight for cannabis freedom. In his last public speaking event at 2009 Portland Hempstalk he declared, “There is nothing better for the human fucking race than to have marijuana morning, noon, and night.” That was the message he had hammered home time and time again, year after year, event after event, fiery speech after fiery speech. The Hemperor will live on in the hearts and voices of cannabis activists forever.

Jack virtually created the cannabis movement as we know it today. His infamous bus tours of the 80’s and 90’s spawned activists from across the nation to take up the cause. His book inspired people to not think of themselves as criminals, but crusaders in a fight for truth and justice. His welcoming presence created opportunities for people to learn about this incredible plant and Jack was always ready to teach. Jack’s passion for hemp and marijuana transcended generations, and he dedicated his life to freeing the plant from the clutches of tyranny. He organized ballot initiatives like no other and inspired an army of cannabis activists to join him on his quest to make cannabis legal. Jack understood that the cannabis plant had unique powers. It was a renewable resource to produce food, fuel, fiber, and medicine. “Hemp can save the planet!,” Jack would scream to tens of thousands of supporters every summer at Seattle Hempfest. His passion for the plant was contagious. His words and his actions motivated the masses to stand up for their belief and to never be ashamed of their love for cannabis.

The great warrior spent over 200 days a year traveling to speak about hemp. The miles he logged for the cause are an incredible feat of courage and strength. His words touched so many of us and gave us a voice of our own to speak out about the injustices of cannabis prohibition. As we see the battles being won at city council meetings, legislative forums, and ballot boxes cross the nation and the world, we all owe a debt of gratitude to the man that gave a plant a voice; a man who defended cannabis day in and day out for decades, and gave his life to educating the world about its powers. Jack is the Moses of cannabis. He has lead us to the gates of the Promised Land and talked to burning hemp bushes most of his days. We must take the final steps of this journey without the leadership of this great man, but we will always remember who made this all possible. The incredible journey is what we cherish about this great leader of the movement. Thank you, Jack.

It is said that Jack believed when he started this quest that he would present the overwhelming evidence about the benefits of cannabis and that the plant would be re-legalized a short time later. That was the belief and conviction that Jack showed us all. He believed it was a simple argument. Cannabis was safe. Cannabis and hemp had innumerable benefits to society in the form of renewable resources. Hemp could save the planet. As the drug warriors tried to paint cannabis as an evil, addictive, dangerous substance Jack would yell, “Show me the bodies!” He knew there were none. It was simple.

Jack had a way of inspiring individuals to join the good fight. He was an instrumental part of getting dozens of initiatives on the ballot. He was sure that people, if given a rational argument and choice, would vote to save the planet. Jack did not grow up smoking marijuana. In fact he did not even try the plant that he would dedicate his life to until he was over thirty-years-old. “I was 30 and this girl I knew found out I had never gotten high. Nobody had ever told me about marijuana,” Jack recalled in an interview. “This girl wanted me to experience something I’d never experienced. She tried three times to get me high. Finally it worked, and I had the most incredible sex I’d ever had.” Jack may have been a late bloomer as far as cannabis was concerned, but he fell in love with the plant and never looked back. His passion would drive him until the day he passed away at 70, and he made sure that everyone he met knew about the benefits of marijuana. Thank you, Jack for your words of wisdom.

When Jack wrote Emperor in 1985 he most likely never thought that a quarter of a century later we would still be debating the subject. Although he began his advocacy in the midst of the “Just Say No” era, he refused to let the drug warriors demonize his beloved plant without a fight. Jack once offered $100,000 to anyone who could prove his book wrong. None ever took him up on the challenge, as while some of the factoids in the book may be hazy (no pun intended), the overall premise was right on target. His findings and writings changed the debate on the subject, and at the very least led people to question cannabis prohibition more deeply. His exposing of the core roots of prohibition, including greed and racism, lead his readers to think critically about why these laws were created and who they were really meant to protect. Jack wanted to expose the government and the big corporations and leaders that influenced them for the lies and deceit that they used to outlaw this most helpful plant. In his final speech at Hempstalk he stated, “I don’t want to give the fucking United States government one fucking dollar of taxes. I thought they should go to fucking jail for getting you and me and 20 million people arrested for pot; the safest thing you can do in the universe.” Jack believed not just that cannabis should be legalized, but that we were all owed a big fucking apology.

Jack was a master of the spoken word. Even after a stroke in the year 2000 that affected his ability to speak clearly, he was always one of the most passionate and moving speakers at every event. His call for people to “vote the scumbags out of office” always riled a passionate response from the onlooking crowd. His voice was filled with conviction that pierced the soul of those listening. He could make you understand that you were not an innocent bystander in this war on cannabis. That because you were there listening to him speak, that you had already taken your first step as a foot soldier in Jack’s army of cannabis enthusiasts. I remember after my raid Jack was one of the first to approach me at the 2007 NORML Conference and tell me he was sorry for what “the lousy bastards” did to my family and me. He looked me in the eye and said, “You’re not a fucking criminal. They are the fucking criminals.” He let me know that some day I would be a hero for my actions. Then he showed me how his cool double barrel pipe worked. Jack was always on. For those kind words that helped me to know I was not alone in my fight I thank him.

What can you say about a man who spent almost 40 years in the trenches fighting for my right, your right, all of our rights, to smoke cannabis. Jack will live on in all of us. We owe him a debt of gratitude for his tireless work and his inspiration to the nation. Jack was a one-of-a-kind. There will never be another Jack. When you smoke a joint of Jack Herer (Skunk #1, Northern Lights #5, and Haze) know that you owe that man big thanks for the work he did to make it possible that you could even take a toke of greatness. Take a moment and thank Jack for the work he did for us all. Lord knows where we would be without this legendary warrior. I promise you, Jack that I will not stop fighting for cannabis freedoms until the job is done or we are in heaven together smoking a fat one laughing at all of this silly shit here on earth. May you be in heaven an hour before the devil knows your dead. Thanks again for the inspiration, the knowledge, and the example of how to be a great leader. Thank you, Jack
http://cannabiswarrior.com/2011/04/15/a-ye...
Add Your Comments
Support Independent Media
We are 100% volunteer and depend on your participation to sustain our efforts!