Add an Event
Newswire
Calendar
Features
Home
Donate
From the Open-Publishing Calendar
From the Open-Publishing Newswire
Indybay Feature
Publish to Newswire
Add an Event
Related Categories: Central Valley | Education & Student Activism
Class Action Rally and March in Fresno
by Mike Rhodes (editor [at] fresnoalliance.com)
Wednesday Apr 13th, 2011 6:37 PM
Students, faculty, and their allies held a rally and march at CSU-Fresno today protesting fee increases, demanding the resignation of Chancellor Reed, and presented a list of demands to Fresno State president John Welty. Organizers estimated 300 people participated in the event, which included a march through the campus, the library, and to the CSUF administration offices. 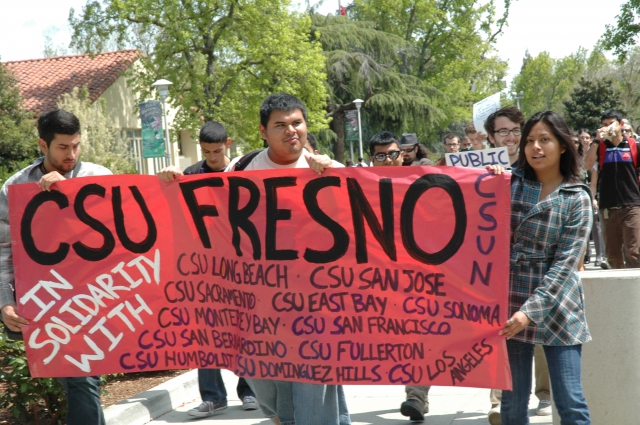 original image (3008x2000)
The following is a FACT sheet given to this Indymedia reporter by a student activist:

What are your demands?

Our Demands: What We Want
1) Chancellor Reed’s Resignation
2) Democratize the CSU Board of Trustees: Trustees Should Consist of Students, Staff and Faculty
3) Full transparency to CSU’s Budget
4) Fair contracts and fair working conditions for all faculty and staff
5) Funding should go to instruction and student services, while cuts should be allocated to Administrative Bloat:

*Cap CSU Executive & Administrators’ salaries to that of the average faculty member.

*Cut housing & car allowances of our campus presidents ($72,000/year for each president).
6) A renewed Commitment to the California Master Plan and Dedicated Funding for Higher Education
7) We want to meet with Jerry Brown and state leaders to discuss how to implement these changes.


What do you hope to gain by doing this?

We want to bring attention to Reed’s corruption and focus on ensuring that the administration receives their fair share of budget cuts. We want CSU to re-prioritize funding for instruction, not corruption, quality education, not a bloated administration.

How is Reed corrupt?

Reed opposes CSU budget transparency, and advocates for unallocated cuts which allows him to minimize cuts to administration while cuts are directed towards classes, student services and loss of faculty and staff. While Reed never seems to be concerned with fee increases, he is consistently vocal about his concern about executive compensation.

Examples of his lack of advocacy for using funding for education include:

• May 2009 Letter to Conference Committee on the Budget:
“I will not waste your time calling on you to refrain from the reductions to the CSU that the Governor proposed on May 14. I will ask that whatever reductions your committee recommends to the Assembly and the Senate be unallocated.”

• October 2008: Chancellor Reed voluntarily gave back to the Governor $31.3 million in CSU funding when CSU wasn’t required to.

• Feb 2010: Reed withheld distributing $50.9 million in unused federal stimulus funds and only released it after students and faculty demanded that he use it on classes

We made this demand to point out that a university should not compensate administrators above educators, and that is why we want administrators to make no more than the average faculty member. If you factor in full time lecturers with tenured faculty, then the average is closer to $67,000.


CSU is facing a $1 billion budget cut. Even with the changes you want to see, it won’t equal a $1 billion cut. Why aren’t you protesting the budget cuts instead?

We have consistently protested budget cuts and will continue to do so. But we can’t ensure that any funding we do receive will be used on education as long as Reed remains Chancellor.

I wholeheartedly agree with today’s rallying cry from the California Faculty Association (CFA) and students to “fully fund the CSU.” Last week I joined representatives from all 23 CSU campuses and Chancellor Reed,the University of California and Community Colleges in meetings in Sacramento with legislators and the governor to present our case for support. The current budget proposal will have disastrous consequences for current and future students at Fresno State and the CSU. We will continue to communicate with everyone possible about the value of higher education for the state of California and the need for the legislature and Governor to act to stabilize the finances of the state.

Student organizers have a meeting planned with Welty on Thursday morning. 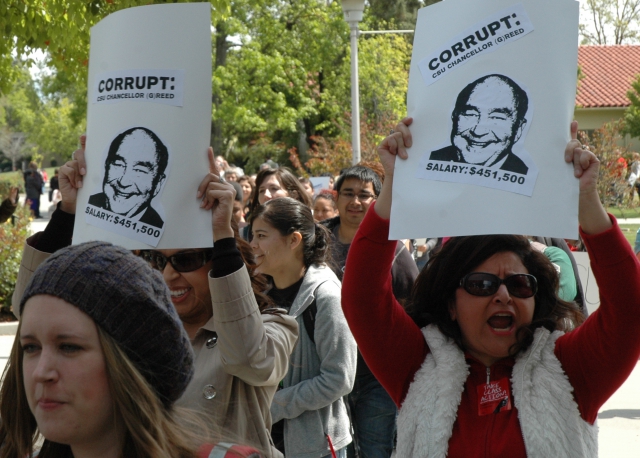 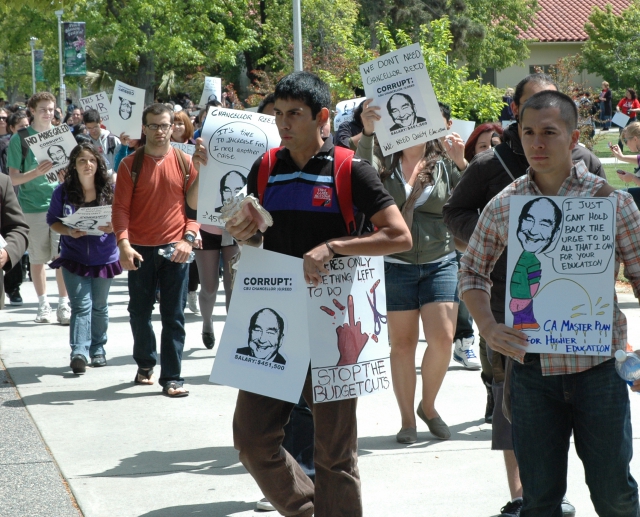 original image (2137x1728)
All photos by Simone Whalen-Rhodes
Add Your Comments
Support Independent Media
We are 100% volunteer and depend on your participation to sustain our efforts!