Add an Event
Newswire
Calendar
Features
Home
Donate
From the Open-Publishing Calendar
From the Open-Publishing Newswire
Indybay Feature
Publish to Newswire
Add an Event
Related Categories: Haiti | International
Haiti's Movement from Below Endures
by Jeb Sprague
Monday Mar 28th, 2011 7:24 AM
Despite those in power trying to keep him out, the return of Aristide to Haiti has rekindled hope among the poor. 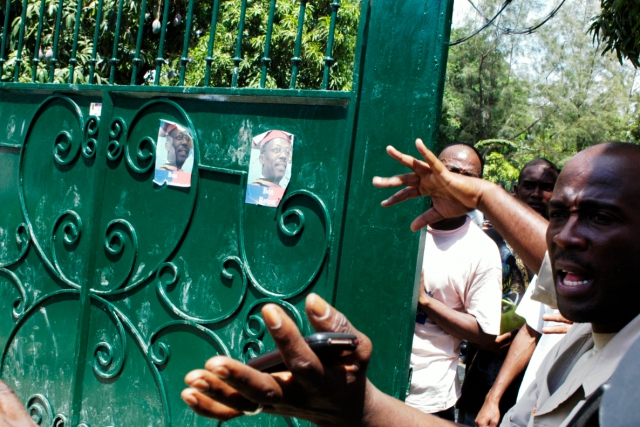 Sitting on walls, a few climbing a telephone pole, rows of youth jumped in excitement at the return of Aristide from exile in South Africa – a heroic figure for the people whose history is one indelibly rooted in resistance.

As the gates swung open for two police vehicles, an SUV with dark tinted windows and a white van carrying guests, an airport grounds man with a huge smile on his face clasped the hands of a skinny police officer motioning the cars through.

Heavily armed UN soldiers with sky-blue helmets stood in rows some 30 meters away.

The caravan made its way alongside the airport route. In waves, thousands poured in from the slums carrying flags and banners on foot. One man dressed as Jean Jacques Dessalines – the founding leader of Haiti – charged down the street atop a horse, waving the crowd forward. Many were on motorcycles or piled into trucks zooming through the dusty air.

READ THE ENTIRE ARTICLE ON AL JAZEERA, here:
http://english.aljazeera.net/indepth/featu...
Add Your Comments
Support Independent Media
We are 100% volunteer and depend on your participation to sustain our efforts!