by Dan Bacher
While fall run chinook salmon numbers are on the upswing, the Sacramento adult winter chinook population, an endangered species, plummeted to only 1,596 fish in 2010. 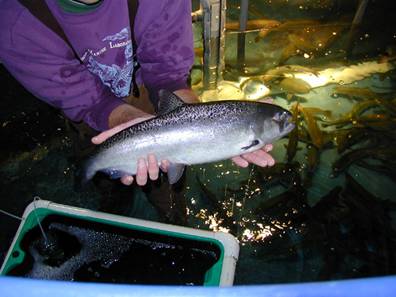 The National Marine Fisheries Service forecasts an ocean abundance of 729,893 Sacramento fall chinooks this year, based on modeling derived from a 2010 jack (two-year-old) salmon escapement to Central Valley rivers in 2010, while the winter and spring runs continue to decline.

Due to the increased fall salmon abundance, recreational and commercial fishermen will see more liberal salmon seasons on the California and southern Oregon coast this year. The recreational salmon fishing season will open on Saturday, April 2 in ocean waters from Horse Mountain in Humboldt County to the U.S./Mexico border.

The Pacific Fishery Management Council (PFMC) at its meeting in Tacoma, Washington on March 9 adopted three public review alternatives for the 2011 recreational and commercial salmon fishing season off the West Coast. The Council will select a final alternative at their next meeting in San Mateo, California on April 9-14.

The salmon numbers were first released during the DFG’s annual informational salmon fishery meeting in Santa Rosa on March 1, an event during which officials from the National Marine Fisheries Service, Department of Fish and Game and the PFMC spoke to and listened to a packed room of recreational fishermen and commercial fishermen.

“The salmon fishery is definitely going in the right direction – we’re more optimistic about the fishery’s recovery than we have been in several years,” said Craig Stone, owner of the Emeryville Sportfishing Center. “Whereas last year recreational anglers were split over whether not to have a salmon season, I think everybody is behind us having a salmon season this year.”

The 125,300 Sacramento River adult fall chinooks that returned to spawn in 2010 included 43,360 fish that returned to the hatcheries and 89,654 salmon that spawned in Central Valley rivers. The 27,500 jacks included 15,482 hatchery fish and 14,699 river spawners, according to Brent Kornos of the California Department of Fish and Game.

“In both the Upper Sacramento River and San Joaquin River systems, we saw the greatest spawning escapement of both adults and jacks,” stated Kornos.

This is an improvement over the 2009 and 2010 record low years, but still nowhere near normal for the river that has historically been the driver for West Coast salmon fisheries. The 10-year (1997-2006) pre-disaster return averaged roughly 475,000 fish.

Back to square one on the winter run

At the same time, the Sacramento adult winter chinook population, an endangered species, plummeted to only 1,596 fish in 2010, according to Kornos.

“Three or four years ago, we thought we were over the hump,” said Stone. “Now we’re back to square one. I hope we get to see the recovery of the winter run in my lifetime.”

To preserve this fragile population, the seasons will have to be crafted around avoiding impacts upon the winter run. Federal biologists recommended that be done through either raising the recreational size limit to 24 inches or reducing the length of the season – or a combination of both.

"We're concerned about what happens now to the winter run now that we've seen four straight years of low returns," said Dan Lawson, NMFS biologist. "The old thinking was that as long as the numbers are increasing, we couldn’t be harming the winter run through the fishing regulations.”

Lawson said that they are hoping to have a new management plan in operation by 2012. Meanwhile, they will address the impacts upon winter run chinook by either having a shorter season or establishing a 24 inch size limit that minimizes any potential mortality to winter run chinooks. The winter run are found mostly from Point Arena in Mendocino County to Monterey.

The Winnemem Wintu Tribe, along with opposing the peripheral canal and a plan to raise Shasta Dam, is trying to pressure the federal and state governments to support their plan to reintroduce McCloud winter run chinook salmon from New Zealand to the McCloud River above Shasta Lake. Thirty members of the Tribe went to New Zealand last spring to conduct joint ceremonies with the Maori people to bring salmon eggs from winter run chinook, now thriving in the Rakaira and other rivers, back to their native river. (http://blogs.alternet.org/danbacher/2011/03/08/winnemem-leader- challenges-feinsteins-idea-of-peace-on-the-river/)

The Central Valley spring chinook salmon population, after years of rising abundance due to the removal of dams and other habitat improvements on Butte Creek and other Sacramento River tributaries, has declined over the past few years also. A total of 4,612 fish, including 1,661 hatchery fish and 2,951 natural spawners, returned to the system in 2010. In contrast, an estimated 21,319 natural spawners and 4,052 adult hatchery fish came back in 2005.

The Sacramento River fall chinook run, the driver of West Coast salmon fisheries, declined from 798,770 adult chinooks in 2002 to only 39,530 fish in 2009. The unprecedented collapse prompted the federal and state governments to close recreational and commercial salmon fishing off the California and southern Oregon coast in 2008 and 2009.

Factors figuring prominently in the Central Valley salmon and Delta pelagic (open water) species collapses include water exports from the Sacramento-San Joaquin River Delta, increases in toxic chemicals and ammonia discharges into Central Valley streams and the failure of the state of California to regulate agricultural water pollution. Ocean conditions also played a role in the Sacramento salmon crash.

Klamath Basin: Scott and Shasta River runs are down

“The preseason forecast of the number of fall chinooks returning to the Klamath Basin was 110,700, compared to a post season estimate of 91,000 fish,” he stated. “We didn’t quite make our goal.”

More information on west coast salmon returns and ocean fisheries can be found online in the PFMC’s “Review of the 2010 Ocean Salmon Fisheries” at http://www.pcouncil.org/salmon/stock-assessment-and-fishery-evaluation-safe-documents/review-of-2010-ocean-salmon-fisheries/.

A list of meetings to be held throughout the season setting process can be found on DFG’s website at http://www.dfg.ca.gov/marine/oceansalmon.asp