Community BBQ in the Park (for a world without police)

by ~Bradley (bradley [at] riseup.net)
On March 13th, the Sunday prior to the International Day Against Police Brutality, Santa Cruz anarchists organized a family-friendly BBQ in Grant Street Park "for a world without police." Dozens of people showed up to grill food, socialize, and listen to Know Your Rights and Copwatch presentations. A bounce-house was set up, but quickly deflated by order of the Santa Cruz Police.

Organizers say the BBQ provided a space for people to "kick it in the park and explore ways that we can rely on each other, rather than on the police." Furthermore, "We don't need the police to be safe. Police are often an invasive or violent presence in our communities." 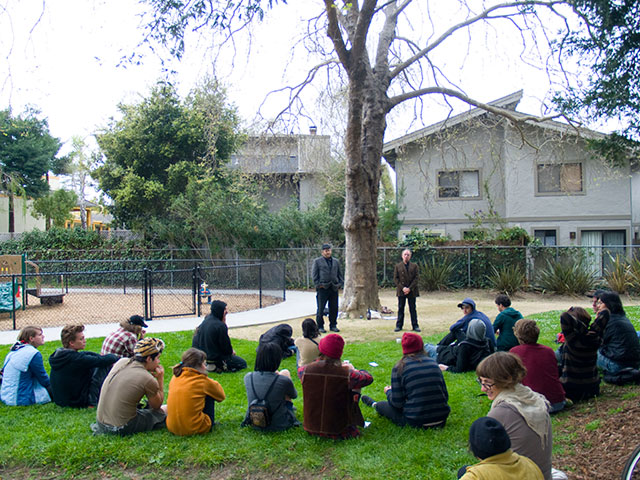 The Copwatch presentation was from people involved with the Modesto Anarcho and Modesto Copwatch collaboration.
END_OF_DOCUMENT_TOKEN_TO_BE_REPLACED
§Jail Toss
by ~Bradley 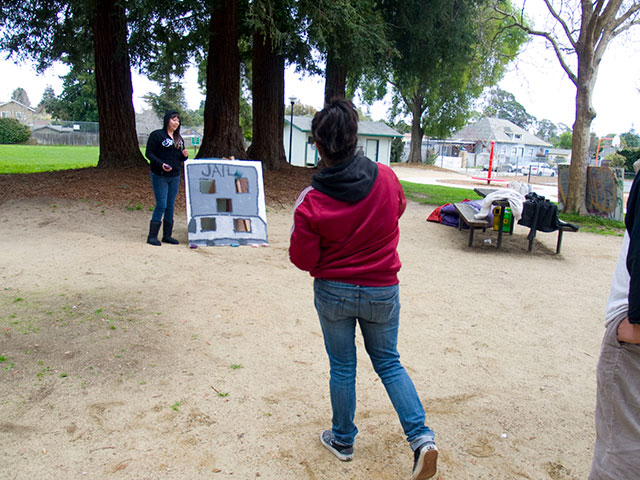 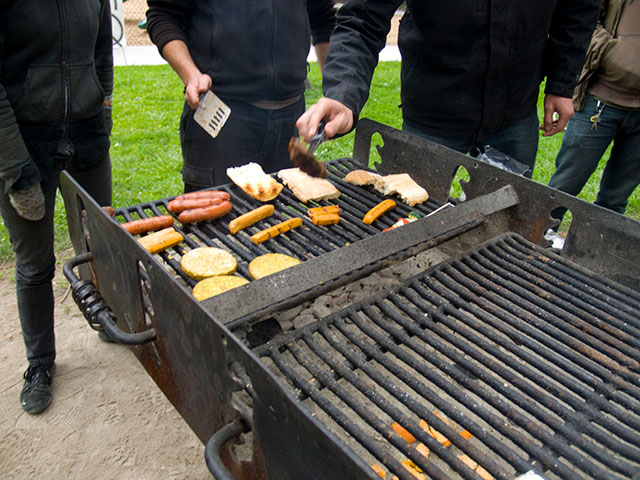 END_OF_DOCUMENT_TOKEN_TO_BE_REPLACED
§Police Violence Is Not An Accident
by ~Bradley 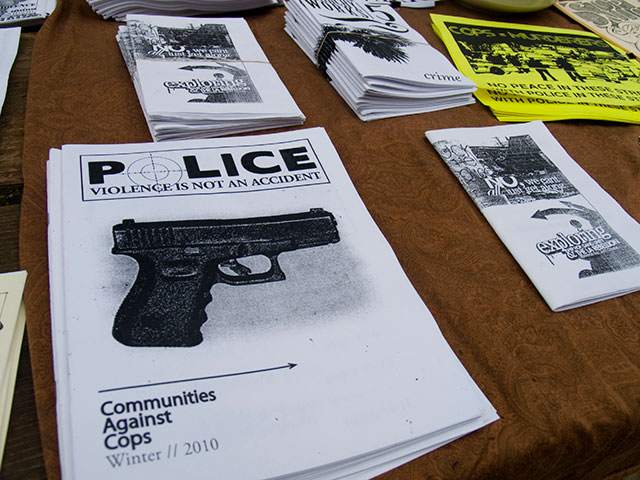 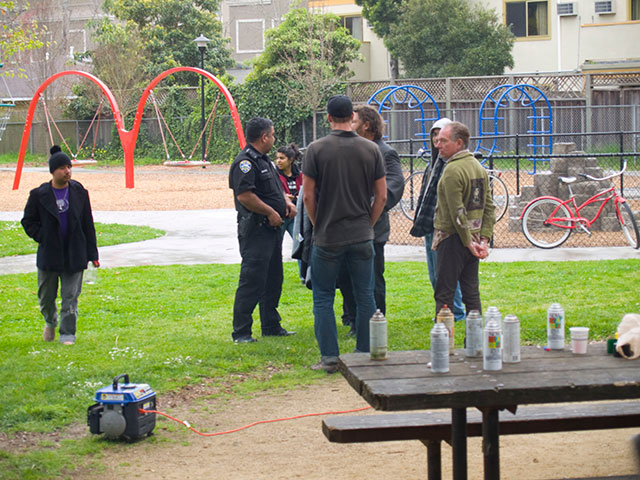 SCPD makes sure people are not in violation of 'having a good time in the park on a rainy day.' More specifically, he said to turn off the music, and then walked around to visually inspect everyone and where they were standing.
END_OF_DOCUMENT_TOKEN_TO_BE_REPLACED
§Bike Art
by ~Bradley 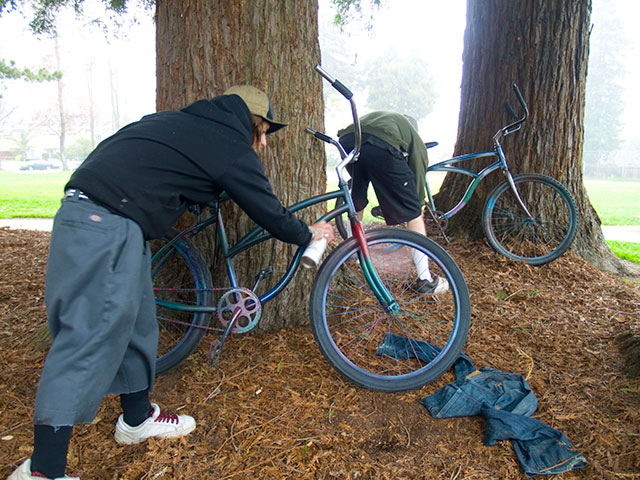 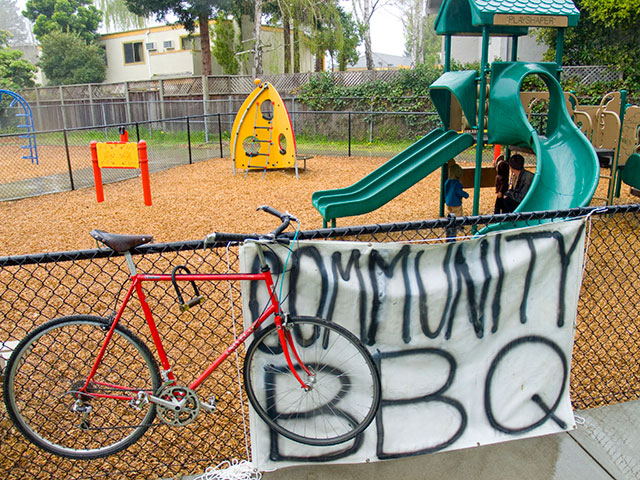 END_OF_DOCUMENT_TOKEN_TO_BE_REPLACED
Add Your Comments
Comments (Hide Comments)
§bounce house? Nooo!!
by A-parent
For what it's worth, my kid was disappointed there was no bounce house. I mean, we still went on the slides and whatnot but come on SCPD, show a little intelligence and decency will ya?

Add a Comment
§Your cops are too educated.
by roknich
I'm sure this is the case. It's the legacy of Berkley, and the urgent need that inspired wealthy industrialists to shut down the Free Speech Movement, which is why the University Skull Crackers have their own set of laws, but as you can see the city has abdicated to their rule - thanks to the city managerial system and the lever of money, the preferred use of which is incarceration rather than education.

In Chicago, the Fields and McCormicks used Pinkertons when the cops wouldn't do their bidding, but they never established absolute control in the manner that invisible billionaires have held California in their claws. We actually had a governor who pardoned the anarchists of the Haymarket incident.

Even in Kalifornia, the rule is not absolute, but I think its clear that the education of your cops is extraordinary. Politics is not a crime in Galesburg, Illinois. Although we do have one cop who idolizes Tailgunner Joe McCarthy, even he has been a decent guy in his professional capacity.

Exactly the opposite of what you have in Santa Cruz.

Remember the boss of these Blue Meanies is the City Manager, no matter how well he fronts himself as "liberal" (and what good have "liberals" been lately?), he runs the political operation that is your local police. If you happen to be a friend of the City Manager, a simple phone call works wonders.

It is a challenge for elected officials to run a city without a city manager, and there's also the challenge of official corruption. Santa Cruz is one of the few cities of its size that has the talent necessary to rid themselves of the council-manager system and give real power to elected officials.

Unfortunately, the people who turn out to vote support the operation that is currently in place, regardless of how well they front themselves as "liberal". Fact is they have the money to present and maintain that front even when it is utterly a lie, and their interest is in protecting their privilege.

Your cops are supposed to be on your side and conduct themselves in a neighborly manner.
Take control.

Did you offer him a hot dog?

By the way, "Education, not Incarceration" has been my personal cross to bear for almost 40 years.
You must do your thing with the resources you have until it becomes the norm. Never quit.
END_OF_DOCUMENT_TOKEN_TO_BE_REPLACED
Add a Comment
§vote away the police
by direct action is for sissies
very perceptive, city manager style government insulates city staff (police) from
city council control, much less control by the people. to fix this will
take amending the city charter through the ballot. ballot measures
are a purer from of anarchy than consensus meetings, but few of today's anarchists
will ever realize that this is so.

as to the liberals, they only pose as liberal,
much like obama.
Add a Comment
Support Independent Media
We are 100% volunteer and depend on your participation to sustain our efforts!