Add an Event
Newswire
Calendar
Features
Home
Donate
From the Open-Publishing Calendar
From the Open-Publishing Newswire
Indybay Feature
Publish to Newswire
Add an Event
Related Categories: Americas | California | North Bay / Marin | North Coast | San Diego | Environment & Forest Defense | Government & Elections | Police State & Prisons | Racial Justice
Resistance to fake marine 'protection' builds from Diego Garcia to Baja California
by Dan Bacher
Monday Mar 7th, 2011 3:18 PM
"The Cucapa are doing the same thing they have been doing for 9,000 years," said Subcomandante Marcos. "The Cucapa and other Indian people called for this camp in defense of nature so they can fish without detentions or being put in jail."

Subcomandante Marcos and Aura Bogado at an Otra Campana meeting in October 2006. On the following day, the Cucapa Tribe and Zapatistas jointly announced plans to set up a Zapatista Peace Camp in the Colorado River Delta to protest an unjust "marine protected area" set up by the Mexican government in collusion with U.S. corporate environmental NGOs. Photo by Dan Bacher. 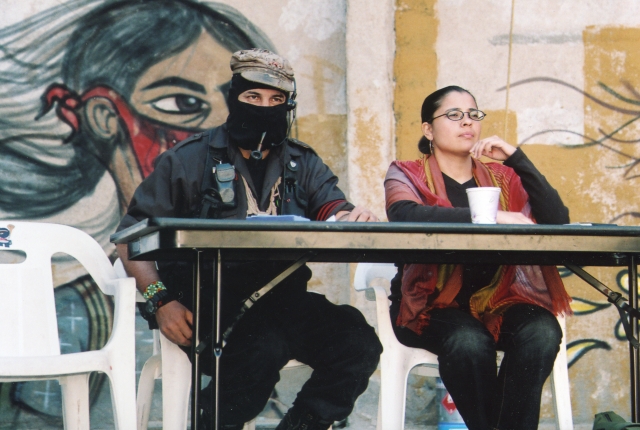 Throughout the world, opposition is building to fake marine "protected" areas designed to fulfill the agenda of corporate globalization and the privatization of public trust resources.

The rights of indigenous people and fishing families are rarely considered in the creation of these unjust no fishing and gathering zones, whether they are installed in the Chagros Islands by the United Kingdom, the Sea of Cortez by the Mexican government, or along the California coast under Governor Arnold Schwarzenegger's corrupt Marine Life Protection Act (MLPA) Initiative.

The African Union recently backed Mauritius against the United Kingdom in the dispute over the Chagros Islands in the Indian Ocean. Secret cables between US and British governments released to the UK Guardian by Wikileaks disclosed how the so-called marine protected area supported by Greenpeace and other corporate environmental groups were installed to deny the native Chagossians the right of return and to allow alleged CIA renditioning of "terror" suspects on the US military base at Diego Garcia.

The Assembly of the Union, at its 16th Ordinary Session held in Addis Ababa, Ethiopia from 30 to 31 January 2011, passed a resolution to "support fully the action of the Government of the Republic of Mauritius at the United Nations General Assembly with a view to enabling Mauritius to exercise its sovereignty over the Archipelago."

The resolution notes with "grave concern that notwithstanding the OAU/AU Resolution/Decisions and the strong opposition expressed by the Republic of Mauritius, the United Kingdom has proceeded to establish a ‘marine protected area’ around the Chagos Archipelago on 01 November 2010, in a manner that was inconsistent with its international legal obligations, thereby further impeding the exercise by the Republic of Mauritius of its sovereignty over the Archipelago."

Mauritius on December 20, 2010 initiated proceedings against the United Kingdom concerning the legality of the purported "marine protected area" under Article 287 and Annex VII of the United Nations Convention on the Law of the Sea.

"Mauritius is also committed to taking other measures to protect its rights under international law relating to its legitimate aspiration to be able to exercise sovereignty over the Chagos Archipelago, including action at the United Nations General Assembly," the resolution noted.

According to Wikileaks cables sent from the British Foreign and Commonwealth Office (FCO) to the U.S. Embassy, setting up the marine reserve effectively “stymied the return of the former islanders.” (http://www.indybay.org/newsitems/2010/12/08/18666039.php)

“We do not regret the removal of the population,” FCO Commissioner Colin Roberts wrote to his U.S. counterpart in May 2009, “since removal was necessary for the British Indian Ocean Territory (BIOT) to fulfill its ‘strategic purpose.’ Establishing a marine reserve might, indeed, be the most effective long-term way to prevent any of the Chagos Islands’ former inhabitants or their descendants from resettling in the BIOT.”

Elements of the British government seem to have been less concerned with protecting marine life than with protecting the U.K.'s relationship with the U.S. "The CIA has allegedly used Diego Garcia as a 'black site' for deposing terror suspects," according to reporter John Bowermaster (http://www.takepart.com/news/2010/12/14/the-politics-behind-the-worlds-largest-marine-reserve-wikileaks).

British Foreign Secretary David Miliband issued an embarrassing apology to members of Parliament in February 2008. Despite "earlier explicit assurances" to the contrary, he admitted that two planes carrying prisoners of the U.S. "war on terror" had landed on the British-owned island of Diego Garcia in 2002 before flying to foreign territory as part of the "American extraordinary rendition program." (http://www.alternet.org/rights/79273).

The marine reserve, the largest in the world, was pushed through by the U.K. government, the Obama administration and nine prominent environmental NGOS, ranging from the Pew Charitable Trust to Greenpeace, in spite of outrage by the Chagossians and human rights groups throughout the world.

"The fish have more rights than us," said Roch Evenor, secretary of the U.K. Chagos Support Association, who left the islands when he was 4 years old.

The MLPA Initiative is not open or inclusive

In California, fishermen, environmentalists and Indian Tribes are pitted against Marine Life Protection Act (MLPA) officials and corporate environmental NGO representatives who are imposing fake marine protected areas along the coast from the Oregon border to the U.S./Mexico border. Ironically, Leon Panetta, the current CIA Director, has been one of the strongest and outspoken supporters of the MLPA Initiative.

Panetta, then a leader of the Join Oceans Commission, praised the MLPA for being "an inclusive, regional public process that involves sport and commercial fishermen, marine scientists, conservationists, divers, kayakers and educators" in an opinion piece in the San Jose Mercury News on August 30, 2008. However, far from being "inclusive," the widely contested initiative excluded tribal scientists from the Science Advisory Panels and failed to appoint any tribal representatives to the MLPA Blue Ribbon Task Forces until 2010!

Frankie Joe Myers, Yurok Tribal member and Coastal Justice Coalition activist, exposed the institutional racism and refusal to incorporate Tribal science that underlies the fake “science” of the MLPA process during a direct action protest by a coalition of over 50 Tribes and their allies in Fort Bragg, California on July 21, 2010.

The MLPA Initiative, overseen by oil industry, real estate, marina development and other corporate operatives, does nothing to protect ocean waters from water pollution, oil drilling and spills, corporate aquaculture, wave energy development, habitat destruction, military testing and all other human impacts on the ocean other than fishing and gathering.

In Mexico, indigenous communities are also struggling against racist fishing restrictions imposed upon them by the right wing Calderon government.

The Cucapa Tribe of Baja California organized a Zapatista Peace Camp with Subcomandante Marcos and the Mayan comandantes from February 2007 to May 2007 to support their right to fish for corvina and other fish in a federal marine reserve, "the Biosphere Reserve of the Upper Gulf of California," in the Colorado River Delta (http://www.counterpunch.org/bacher04212007.html). Indigenous activists from throughout the U.S. and Latin America successfully defended the tribal members against harrassment by the government.

Subcomandante Marcos and 10 comandantes from Chiapas, en route to the peace camp that April, were welcomed by the O'odham Tribe and friends in the state of Sonora.

"The Cucapa are doing the same thing they have been doing for 9,000 years," said Marcos. "The Cucapa and other Indian people called for this camp in defense of nature so they can fish without detentions or being put in jail."

The marine reserve, rather than addressing the massive water diversions of water that led to fish declines in the Sea of Cortez and the reduction of the Colorado river at its mouth to a dry bed or trickle, penalizes the greatest defenders of the river and its ecosystem, the Cucapa.

The greenwashing that occurs by the imposition of the reserve parallels the corrupt MLPA process that does nothing to address the exports of Sacramento-San Joaquin River Delta Water, water pollution, habitat degradation and other factors that have led to Central Valley salmon and Bay-Delta Estuary fish declines in recent years.

From the Chagros Islands, to the Northern California Coast, to the Colorado River Delta in Mexico, people are now resisting and will continue to resist so-called marine protected areas that are being installed not to "protect" the ocean, but to deny basic human rights and to privatize the oceans.
Add Your Comments
Support Independent Media
We are 100% volunteer and depend on your participation to sustain our efforts!