Newswire
Calendar
Features
Home
Donate
From the Open-Publishing Calendar
From the Open-Publishing Newswire
Indybay Feature
Publish to Newswire
Add an Event
Related Categories: San Francisco | Health, Housing & Public Services
Stop Smart Meters! Protest in SF
by J Hart (info [at] stopsmartmeters.org)
Sunday Mar 6th, 2011 11:00 PM
Protests have been ramping up in SF to fight against PG&E's stupid meters. Come to the PUC meeting on Thursday March 10th at 9:30am to speak. 505 Van Ness SF.
Copy the code below to embed this movie into a web page:
Download Video (10.4MB) | Embed Video
Utilities across the country are installing so-called ‘smart’ meters. As a result, bills are skyrocketing, health
and safety violations are being reported, and privacy in our homes is being violated.

Do we really need wireless smart meters? Decide for yourself:

Do you want an accurate, reasonably priced utility bill?

Utility customers have noticed huge increases in their bill after a ‘smart’ meter is installed- in some cases
hundreds of dollars more than usual. A study released in September by the Structure Group, who calls PG&E
one its biggest clients, claimed the meters were accurate. But the study did not examine the meters operating as
part of a mesh network as they are in the field. And overcharging continues. More: http://bit.ly/5GGIky

Do you value civil liberties and the right to privacy?

When a ‘smart’ meter is installed, your utility has access to a treasure trove of information about you- when you
wake up in the morning, when you go on vacation, what kinds of appliances you are using, etc. They will be
able to sell this information to a series of corporations- even law enforcement. Read the interview with the
Electronic Frontier Foundation about how ‘smart’ meters violate privacy: http://bit.ly/hoKAwx

Do you care about wildlife and cutting carbon emissions?

Smart meters do not result in energy savings, according to an Oxford University study: http://bit.ly/gvpYxZ
They may even increase energy consumption. There is also emerging evidence that wireless, non-ionizing
radiation (from cell phones, wifi, and ‘smart’ meters) harms wildlife and damages trees: http://scr.bi/bPT7fE

Are you concerned about job losses in this anemic economy?

PG&E claims that they are retaining 80% of their meter readers. What they don’t tell you is that several years
back, they transitioned their meter readers from full time to temporary so the job loss would not appear so drastic.
We cannot afford to lose thousands of jobs in this economy. More: http://bit.ly/eqinZf

Do you value your health, and the health of your family and friends?

Just as we’re learning that cell phone use is associated with brain tumors, why are we installing the same technology
on everyone’s homes with no right to opt out? Thousands of people have complained of tinnitus, headaches, nausea,
and sleeplessness after a ‘smart’ meter was installed. This is consistent with published studies associating these
symptoms with exposure to electromagnetic fields. Smart meters violate already high FCC limits on human exposure
to microwave radiation (see http://bit.ly/gpLQOF) and are being installed as “electro-sensitivity” skyrockets. See:
http://bit.ly/f90JLi There are also reports of ‘smart’ meter interference with pacemakers and other implants.

Are you in favor of fire regulations that put the safety of residents first?

A number of electrical fires have been caused by ‘smart’ meters. PG&E’s meters are not UL certified, as is
required by electrical code for all electric appliances within the home. Smart meters are potential ignition
sources and remove utility personnel from neighborhoods. If meter readers had been present in San Bruno,
would the gas leak have been detected? Whistleblowers allege unsafe installations: http://bit.ly/fEcvPa

Are you alarmed about the decline of our democracy and informed decisionmaking?

The conversion to ‘smart’ meters is one of the largest technology rollouts in history, and yet virtually no public
consultation with ratepayers or local governments was carried out in advance. The CA Public Utilities
Commission, an appointed (not elected) body who are meant to regulate utility companies, has ignored popular
local opposition and recklessly continues forcing ‘smart’ meters onto the people of CA. http://bit.ly/gvwbfe

SPEAK OUT! Spread the word to friends and neighbors, put a NO SMART METERS sign on your
meters, demand the CPUC and your local government TAKE ACTION, REFUSE installation, and
DEMAND REMOVAL! As of March 2011, more than 30 cities and counties in CA have demanded a
moratorium. Nine have criminalized smart meters. More ways to take action: http://bit.ly/fGCXve
More information and analysis at http://stopsmartmeters.org E-mail: info [at] stopsmartmeters.org
http://stopsmartmeters.org
§
by J Hart Sunday Mar 6th, 2011 11:00 PM 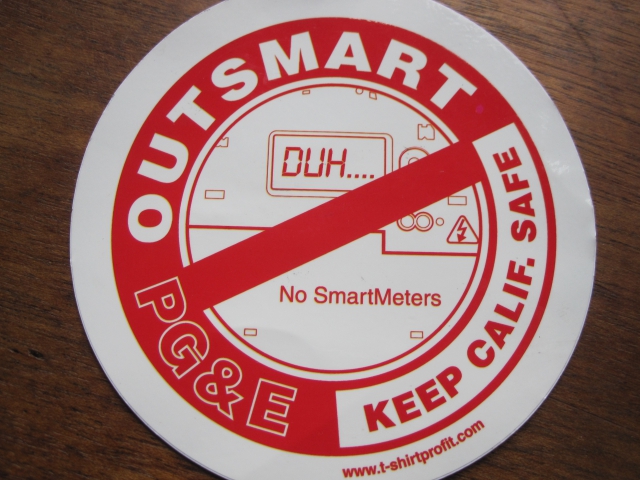 original image (4000x3000)
http://stopsmartmeters.org
Add Your Comments
LATEST COMMENTS ABOUT THIS ARTICLE
Listed below are the latest comments about this post.
These comments are submitted anonymously by website visitors.