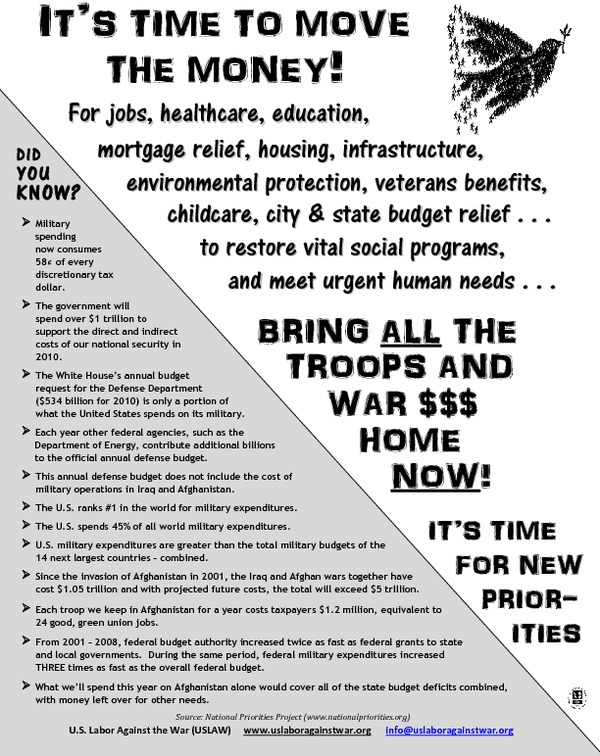 The whole country has been focused on the tremendous struggle going on in Madison, WI to defend public workers and the services they provide. WI Governor Scott Walker has not only faced 2 weeks of tens of thousands marching and sit-ins at the WI state capitol rotunda. He also was caught with his political pants down in a phone conversation he thought he was having with a major, millionaire campaign supporter, David Koch.

On Saturday, "Rally to Save the American Dream" events have been called in solidarity with the people of WI and to oppose budget cuts in our communities. US Labor Against the War affiliates and supporters and the New Priorities Network member groups should be there!

In Madison,WI, Veteran's for Peace marched with "How's the war economy working for you?" banners, WI Peace Action members marched with "Move the Money" banners and Code Pink's Medea Benjamin spoke in the WI State Capitol rotunda and all got tremendous support for cutting Pentagon budget to fund human needs. Iraq Veterans Against the War have issued a powerful statement, "We are public employees, too."
MSNBC
Naomi Klein "This Is A Classic Example Of The Shock Doctrine"
On Saturday, let's get into the streets in state capitols, cities and towns around the country. Find the demo near you: http://bit.ly/eRAIZx

Bring banners and let's raise the call for: Money for Jobs, Not for War! Bring the War $ Home! Move the Money from Weapons & Wars back to our Communities!

We can launch or continue to build our cut military spending to fund our communities campaigns by joining these efforts to protect community services and the workers who provide them.

Send us photos of your banners and the rallies and we will post on the New Priorities Network website.
News reports On Governor Scott Walker's Chat with millionaire Koch:
Washington Post: http://wapo.st/grUdLC
AP: http://news.yahoo.com/s/ap/20110223/ap_on_re_us/us_wisconsin_budget_unions
Buffula Beast audio of phone call: http://www.buffalobeast.com/
USLAW "Move the Money" Flier Available to Download


Hosted by Frank Burton & David Siegel, Pat Blackwell-Marchant, David Siegel, Jaclynn Tybursky, Pat Johnstone
Description Take action: This is an all-hands-on-deck moment.
The protests in Wisconsin are sparking something we haven't seen for years. Hundreds of thousands of people have taken to the streets of Madison Wisconsin to stop a radical, right-wing attack on workers. Protesters have occupied the Capitol building for the last eight days and nights.
Thousands of us are going to rally across the street from the San Francisco City Hall at Noon Saturday in solidarity with the people of Wisconsin.
The sheer arrogance of Tea Party governor Scott Walker said he could dismantle 50 years of workers' rights without a fight, but boy was he wrong. He has awakened the sleeping giant--us, the people of America.
This isn't just about Wisconsin. In state capitols across the country and in Washington D.C., Republicans are using the putrid economy their Wall Street buddies wrecked as an excuse to slash vital programs and hurt workers, infants, children, and seniors.
The American Dream is under attack. T
END_OF_DOCUMENT_TOKEN_TO_BE_REPLACED
Added to the calendar on Sat, Feb 26, 2011 1:07AM
Add Your Comments
Support Independent Media
We are 100% volunteer and depend on your participation to sustain our efforts!