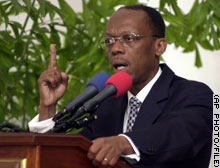 Haiti watchers in the US repeatedly hear several questions from North Americans new to the island nation’s history: why is Washington obsessed with containing any legitimate pro-democracy movement in the hemisphere’s poorest country? How is a nation state the size of Maryland with a mostly destitute population of nine million a threat to the US?

Classified US diplomatic cables recently released through Wikileaks provide some interesting insights into how to answer such queries. (Many can be found at investigative journalist Ansel Hertz’s excellent site [http://www.mediahacker.org/] and via the Center for Economic and Policy Research [http://www.cepr.net/index.php/relief-and-reconstruction-watch/].)

The palpable aversion to Jean-Bertrand Aristide and his Fanmi Lavalas party, which dominate these cables, is not surprising to anyone familiar with the last 20 years of Haiti’s history. As thoroughly detailed in Peter Hallward’s ‘Damming the Flood’ and Randall Robinson’s ‘An Unbroken Agony’, the US, with France and Canada, aided and abetted the February 2004 coup which ousted the democratically-elected Aristide government and replaced it with a murdering kleptocracy which systematically jailed, tortured, and killed thousands of Lavalas activists.

Haitian activists I spoke to in Port-au-Prince in 2006 told me the George W. Bush-backed coup likely destroyed more lives than the horrific first anti-Aristide coup of 1991 (which George H.W. Bush’s administration supported).

On 8 June 2005, US Ambassador to Brazil John Danilovich and his political counsellor met with then President Lula da Silva’s international affairs adviser Marco Aurelio Garcia. The relevant leaked cable reads: ‘Ambassador and PolCouns…stressed continued US G[overnment] insistence that all efforts must be made to keep Aristide from returning to Haiti or influencing the political process…[and that Washington was] increasingly concerned about a major deterioration in security, especially in Port-au-Prince.’

Garcia duly assured the superpower’s representatives of ‘continued Brazilian resolve to keep Aristide from returning to the country or exerting political influence.’ Further, Garcia noted that Aristide ‘does not fit in with a democratic political future in Haiti.’ Given that Aristide was twice elected by overwhelming majorities in the most open, nonviolent elections in Haiti’s history, the definition of ‘democratic’ here must be uniquely Washingtonian.

An October 2008 cable from then US Ambassador to Haiti Janet Sanderson is a choice example of the patronising doublespeak that students of US foreign policy either tune out or relish. Arguing fiercely for the continuation of the UN ‘peacekeeping’ operation known by its acronym MINUSTAH, set up to take over from US, French and Canadian troops to legitimise the 2004 coup, Sanderson asserts: ‘MINUSTAH is a remarkable product and symbol of hemispheric cooperation in a country with little going for it.’

Sanderson explains: ‘The fundamental USG policy goal in Haiti is to make it a viable state that does not pose a threat to the region through domestic political turmoil or an exodus of illegal migrants. To reach that point, Haiti must be able to assure its own domestic security, govern itself with stable democratic institutions, and create a business climate that will get the economy moving […] The United Nations Stabilization Mission in Haiti (MINUSTAH) is the largest and most effective external institution pursuing [these goals].’

She concludes breezily, ‘Haiti’s progress toward viability hinges on a large international security preserve and continued injections of assistance to consolidate its institutions and ease human misery.’ A sentient being capable of rudimentary critical thinking might wonder if Sanderson is being droll here, given the human misery brought on by both US-backed anti-Aristide coups. Aristide, after all, earned the enmity of Washington primarily for taking seriously the teachings of liberation theology and actually advancing a ‘preferential option for the poor’. Most impudently, Aristide’s last administration pushed through a doubling of the pitifully low Haitian minimum wage, an initiative more clearly directed at ‘easing human misery’ than anything done under the post-2004 coup UN occupation (which has cost around $600 million yearly and with next year’s requested budget now at $850 million).

In fact, the human toll of the heavily militarised UN mission has been significant. A March 2005 report by the Harvard Law School Advocates for Human Rights and the Global Justice Center stated: ‘MINUSTAH has provided cover for abuses committed by the HNP [Haitian National Police] during operations in poor, historically tense Port-au-Prince neighborhoods. Rather than advising and instructing the police in best practices, and monitoring their missteps, MINUSTAH has been the midwife of their abuses.’

During trips to Haiti between 2004 and 2008, I spoke to a number of poor Haitians who lost (unarmed, civilian) family members in UN raids on poor neighborhoods, which too often have turned into free fire zones for international troops.

In August 2004 I spoke to witnesses to a UN operation in the Bel Air neighborhood of Port-au-Prince in which Brazilian troops killed several unarmed residents on 29 June 2004. One of those killed was a wheelchair-bound man named William Mercy. Neighbors present at the scene told me Mercy felt safe in front of his residence as the raid commenced, since he was clearly handicapped and unarmed. But in the event, a UN soldier blew the top of Mercy’s head off. William Mercy’s family told me UN officials subsequently ignored their remonstrations, and tried to deny the killing took place.

On 24 August 2005 I witnessed a MINUSTAH operation in Simon Pele (a community bordering the seaside shantytown of Cite Soleil) which was stunning in its liberal use of heavy caliber weapons in a densely populated area. Footage taken by a videographer shows a Brazilian soldier firing from the top of an Armored Personnel Carrier. I witnessed Brazilian troops running from two APCs into Simon Pele, and soldiers within the neighborhood were firing their weapons.

One of those shots killed a young man whose mother I spoke to four days later. Adacia Samedy told me her son Wildert was fixing a radio on the roof of their family home when UN snipers shot him in the operation I witnessed from the outer perimeter. Ms. Samedy told me: ‘My message to the UN is: “Thank you for killing my son. I don’t see the sense in their work, they come in, shoot, and people passing can get shot.”’

I asked her if any UN personnel had returned to see if civilians were killed, or to offer any assistance. Nobody with the UN had offered so much as a basic acknowledgment of her loss.

The Haiti Information Project documented a 6 July 2005 assault on Cité Soleil by UN troops which killed and wounded dozens of civilian residents, including children and infants. Eyewitness stated that UN troops were directly responsible.

According to declassified cables sent that day from the US Embassy in Port-au-Prince to the State Department, UN troops fired 22,000 shots in seven hours in a neighborhood where most people live in flimsy sheet metal structures.

A March 2008 US State Department cable released by Wikileaks shows that Brazil played the role of brutal enforcer in Haiti, expecting an eventual payoff at the UN: ‘Brazil has stayed the course as leader of MINUSTAH in Haiti despite a lack of domestic support for the PKO. The MRE has remained committed to the initiative because it believes that the operation serves FM Amorim's obsessive international goal of qualifying Brazil for a seat on the UN Security Council.’

In April 2008 a spike in global food prices, partly the result of speculation on global markets, triggered riots around the world by other humans in misery. Sanderson’s communique notes that Haiti’s food riots ‘threw into stark relief MINUSTAH’s role as a security force of last resort. MINUSTAH troops, FPU’s and UNPOL provided the criticl [sic] extra security capability that prevented rotes [sic] from overrunning the Presidential Palace and pobably [sic] chasing President Preval from office.’ As what Sanderson called ‘the country’s ultimate riot control force,’ MINUSTAH thereby kept a lid on the kind of misery-driven pressure from below which has more recently given Washington such headaches in Tunisia and Egypt.

Sanderson helps clarify the broader picture of US enthusiasm for MINUSTAH: ‘Paying one quarter of MINUSTSAH’s budget through our DPKO assessment, the US reaps the security and stabilization benefits of a 9,000-person international military and civilian stabilization mission in the hemisphere’s most troubled country. The security dividend the US reaps from this hemispheric cooperation not only benefits the immediate Caribbean, but also is developing habits of security cooperation in the hemisphere that will serve our interests for years to come. In the current context of our military commitments elsewhere, the US alone could not replace this mission […] Without a UN-sanctioned peacekeeping and stabilization force, we would be getting far less help from our hemispheric and European partners in managing Haiti.’

A June 2007 cable by then US Ambassador to Chile Craig Kelly addresses the threat posed to Washington by Hugo Chavez, whom Craig notes ‘has made significant inroads, particularly with local populations, by providing programs for the underprivileged and by casting the US as elitist and only interested in promoting free trade to the benefit of big business. The slogans are facile: neoliberalism makes the rich richer and the poor poorer; the Bolivarian Revolution guarantees our region’s sovereignty and dignity. But they ring true with some local populations and make others feel better about their own lack of progress.’ Luckily the US diplomatic core can see through such drivel.

And lucky too that Washington has its traditional allies to turn to. As Kelly notes, ‘Southern Cone militaries remain key institutions in their respective countries and important allies for the US […] An increasingly unifying theme that completely excludes Chavez, and isolates Venezuela among the militaries and security forces of the region, is participation in traditional and regional peacekeeping operations.’

Kelly concludes: ‘We should explore using the mechanism that the region’s contributors to MINUSTAH (Haiti) have established to discuss ways of increasing peacekeeping cooperation in a broader scale.’

It’s not unlikely that one of the reasons ‘Southern Cone’ militaries pitched in to help squelch Haiti’s democratically elected and still wildly popular leader Aristide, and his political party Fanmi Lavalas, has to do with one of the former priest’s most popular moves in office: unlike any other Latin American or Caribbean leader of the past 20 years, in 1995 Aristide successfully disbanded the notoriously brutal and widely despised Haitian military.

In recent news, as Aristide once again asserted his eagerness to return to Haiti from forced exile in South Africa, Washington has continued to express its opposition to such a disturbing expression of sovereignty. ‘It would prove to be an unfortunate distraction to the people of Haiti,’ asserted State Department spokesman P.J. Crowley. Crowley didn’t explain if the US approving elections which excluded Lavalas, leading to a runoff with two rightwing candidates, was also distracting, or just imperial arrogance.
http://www.pambazuka.org/en/category/featu...
Add Your Comments
LATEST COMMENTS ABOUT THIS ARTICLE
Listed below are the latest comments about this post.
These comments are submitted anonymously by website visitors.