Sunday, February 20--From the open publishing newswire at Twin Cities Indymedia: The attempt to co opt and temper the movement against workers and our Unions that has arisen in Wisconsin is intensifying as thousands of workers surround the capital in Madison for the [now seventh] day of protests.

Such developments terrify the Labor hierarchy as the protests could develop in to a generalized movement against the employers  which would by its very nature include demands that threaten the their interests, wages, benefits, increased leisure time, increased spending on education, public services and jobs etc.  This would draw all those who are denied the conditions and rights that Unionized workers have; youth, the low waged, students and the poor. The Union hierarchy are terrified of the anger that exists beneath the surface of US society from breaking out in to the open and taking organizational form. (read on for more)

TCIMC Note: Saturday's demonstrations in Madison were the biggest to date, entirely ringing the Capitol building and dwarfing a Tea Party counterprotest of 1,000 people or less.  Outpourings of support came from around the country--many activists from Minnesota and elsewhere used their union-won weekend to join the demonstrations, and pizza restaurants took steady calls ordering for protesters from as far away as Egypt.  Protests Sunday were expected to be subdued due to impending snow, but Fight Back! News reported, "although all the buses in southern Wisconsin are booked solid, organizers are expecting the largest numbers yet on Monday and Tuesday if Republicans do not scrap the anti-union legislation."

The Union leadership is in a very uncomfortable position as they have no problem with concessions on the wages and benefits of their members, including pensions. Top Union officials are usually exempt from such concessions anyway and, as we have pointed out in earlier blogs on the public sector, AFSCME's president, Gerald McEntee, receives a total compensation package of some half a million dollars a year.  Such demands threatens their relationship with the employers that is based on Labor peace and the worship of the market. 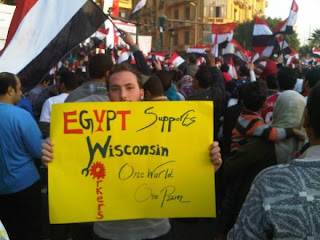 A treacherous coalition of the trade Union bureaucracy and their allies in the Democratic Party are working overtime to ensure the movement dissipates and that the goal of the movement is limited to one demand and one demand only; "Don't eliminate collective bargaining rights." What's the gain for the member's if we have the right to bargain when all they're talking about is giving away our rights and benefits? There's nothing in it for us except demoralization and defeat.  The Union heads on the other hand have no purpose in society if they can't sit down with the boss.

Jesse Jackson was dragged out from obscurity to facilitate this process and spoke to the crowds yesterday while today, thousands more gathered along with a few hundred anti-Union supporters of the bill denying workers collective bargaining rights.

Along with the Jackson staging, the Democrats skipped town and went across the border to Illinois in a PR stint to foster the myth that they are fighting for the interests of working people. They also need to booster the Labor bureaucracy's morale after Obama and the party broke just about all the promises they made in order to get the Labor officials to hand over millions of dollars of their members' money to get them in to office.

In addition, both Union officials and Democrats are ensuring the bosses through their media not to worry, there is no need to go too far and stir up a hornets nest within organized Labor that could spread to the rest of the working class.  The heads of the AFL-CIO and the Change to Win Coalition will not be an obstacle to concessions is the message and the Labor tops promise that any movement from within the ranks of organized Labor that threatens this strategy will be suppressed.

An AFSCME official re-assures the capitalist class that their offensive against workers is acceptable to them, "Christopher Policano, a spokesman for the American Federation of State, County and Municipal Employees, said his union was willing to negotiate concessions with Mr. Walker, “but he wants to throw out the bargaining table.” (1)

The role of the Labor hierarchy is nothing less than criminal.  Another AFSCME official ingratiates himself even further:

"Earlier Friday, Marty Beil, head of the Wisconsin State Employees Union, said his members would agree to pay more of their pension contributions and health insurance benefits as Walker is demanding. But Beil said his union would never agree to give up decades-old bargaining rights.

Beil's union is part of AFSCME, the largest state and local employee union in Wisconsin, which represents 68,000 workers for the state, Milwaukee, Milwaukee County and other municipalities. An AFSCME spokesman said Beil was speaking for all the group's union locals in the state.

Mary Bell, the president of the Wisconsin Education Association Council, the state's largest teachers union, said her group also would make the financial concessions to keep its bargaining rights."

"This is not about money," Bell said in a phone conference. "We understand the need to sacrifice." (2)

But this is about money.  It is about cuts in social services.  It is about wages and conditions and quality of life.  The capitalist class, with the help of the heads of organized Labor, are shifting the burden of their economic crisis on to the back of workers and the middle class. After handing over trillions of taxpayer dollars bailing out banks and hedge fund managers (John Paulson earned $5 billion last year after a previous $5 billion year in 2007.) and the like, and after spending billions more in senseless wars around the world on behalf of the corporations' the taxpayer is being forced to pay for it all.  Corporations CEO's have some $2 trillion in cash they refuse to invest in the economy.

The workers in Wisconsin are in a position to kick off a movement that can change the course of US history as the Arab workers are doing in the Middle East. What good is the right to talk to the employer if all the leadership ever talks about is how willing they are to hand over wages, right and benefits that took a century of heroic struggle to win?

As we pointed out in an earlier blog the Union hierarchy cares only about revenue in the form of dues money.  To them, the Unions are employment agencies with them as the CEO's.  By using this opportunity to go on the offensive, yes, to maintain bargaining rights but to also raise demands that will draw  in the rest of the working class, we can reverse the direction the disastrous policies of the present leadership have taken us. Demands such as:

• No concessions
• For a $15 national minimum wage or $5 an hour wage increase whichever is greater
• For a massive program of infrastructure spending to create jobs
• A 30- hour workweek with no cut in pay
• End the wars in Afghanistan and Iraq—bring the troops home
• Free public education at all levels
• No foreclosures
• Organize the unorganized
• No support for Democrats or Republicans, build an independent mass working people’s party

Charles Smith, a retired AFSCME rank and file activist from Northern California who sent FFWP the quotes we have included today said of the proposed solidarity actions being suggested by AFSCME officials here:
"In the meantime AFSCME California is planning a candle light vigil at the State Capital. Why? Are we in mourning? Is this a statement of solidarity or despair? Does AFSCME want to win in Wisconsin? If so why not call for a one day strike? Isn't that what solidarity is all about? Is AFSCME "FIRED UP!" or sleep walking? The actions of the rank and file in Wisconsin proves beyond a doubt the members are willing to fight. The actions of their leadership proves they don't."

The movement must be built upon and generalized.  Mass meetings are not being organized from what we have learned and should be.  Committees can be set up to build for a 24 hour statewide strike with demands that can appeal to all workers and youth, organized and unorganized. Strike committees, unemployed committees, student committees and political committees.

How can we inspire workers and youth to belong to a Union and get active  in political life when Union leaders announce to the bosses that they are quite willing to hand over our living standards on platter; that there is no alternative to concessions.  What is appealing about a Union that costs money to join and whose policies are concessions?

We all know who our enemies are, but sometimes the obstacle to victory is those who we think are our friends.  Reject Jesse Jackson and the Labor leaders' attempts to water down this working class movement and drag it in to that black hole we call the Democratic Party.

Build a united working class movement.  Make the Wisconsin battle a national battle. No to candlelight vigils and yes to a nationwide general strike.

http://tc.indymedia.org
Add Your Comments
LATEST COMMENTS ABOUT THIS ARTICLE
Listed below are the latest comments about this post.
These comments are submitted anonymously by website visitors.