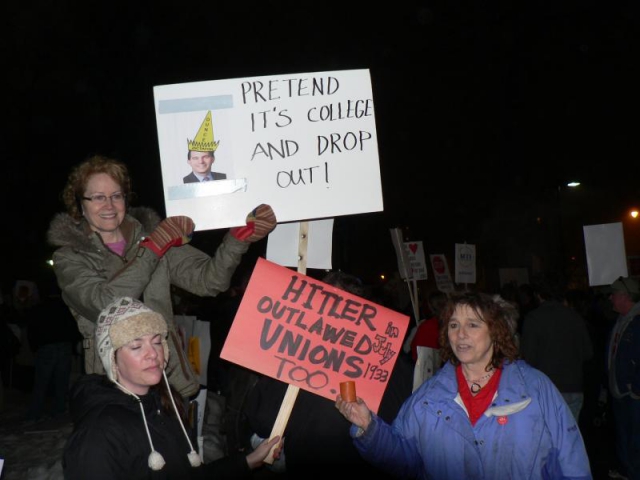 original image (800x600)
Two days ago, the Governer of Wisconsin banned collective bargaining by all public sector employees. He threatened to call out the National Guard in response to any resulting unrest. Groups affected by this ban includes public school teachers and teaching staff at state run colleges and universities. Governer Scott Walker is a tea-bagger and Wisconsin is now an experiment in far right ideology getting their wishes to dismantle the rights of workers.

SYNOPSIS FROM DEMOCRACY NOW:
"Recently elected Wisconsin Republican Governor Scott Walker has proposed a bill that would eliminate almost all collective bargaining rights for most public workers and slash their pay and benefits. Walker has also notified the state's National Guard to be on alert for actions taken by unsatisfied state, county and municipal employees."

MASSIVE PROTESTS are being held righit now in Madison, WI:
"Where Tuesday's mid-day protests drew crowds estimated at 12,000 to 15,000, Wednesday's mid-day rally drew 30,000, according to estimates by organizers."

LIVE COVERAGE BREAKING NEWS @:
http://prwatch.org/news/2011/02/9944/live-reporting-wisconsin-protest
(some of the breaking news is posted below)

NOTES:
Wisonsin is a "blue state" that is also a significant place in the history of the union movement. This act by Gov. Scott Walker is a stab in the eye of the union movement and progressive ideals. The worst thing about this blow to workers rights is that it will set a precedent for other states in the U.S.:

" I hate to tell you, there is a little bit of history of it. Wisconsin is one of the places where the trade union movement in United States took shape going back, going back to the 1880s. While many people are familiar with the story of the Haymarket violence in Chicago, the fact is that Wisconsin has had some real history of intense and sometimes violent union struggles—not violence by the workers so much as workers who have been attacked by military or quasi-military forces.

But, in the state of Wisconsin since the 1930s—and I want to emphasize that, since the 1930s—we have had relative labor peace in the public sector. Wisconsin is where, as I mentioned before, the union AFSCME was formed. Wisconsin has recognized collective bargaining rights for public employees for more than 50 years. And over that time, we have not had the National Guard called out, we have not had violent situations. The fact of the matter is, Scott Walker is attacking a model that has worked very well. And he's doing so for no reason."

"Well, I think that's exactly where to go with this discussion, Amy, because Wisconsin is a state that Teddy Roosevelt used to refer to as the "laboratory of democracy." This is a place where ideas that the rest of the country takes up have historically come from. It's partially because the state has a very fluid, very kind of fast-acting model for state government. And there's simply no question that Republican governors in New Jersey, in Ohio and in a number of other states are watching what happens in Wisconsin. If Governor Walker pulls this off, if he succeeds in taking away collective bargaining rights from the union, AFSCME, which was founded in Wisconsin back in the 1930s, if he takes down one of the most—one of the strongest and most effective teachers' unions, WEAC, in the country, then we really are going to see this sweep across the United States. There is simply no question of that. Governor Kasich in Ohio has already introduced a similar bill. We've seen Governor Daniels in Indiana, by fiat, do something of this kind a while back."

"And there's no doubt in my mind that this is part of a wide Republican and conservative strategy to take down public employee unions, which have done two things: one, they have challenged Republicans at election time—the truth of the matter is, public employee unions are a very important political force in this country; but two, and I think more importantly, they have been the primary advocates in the United States, for the better part of 30 years, for public sector spending and for public education. If you weaken these unions, you really do weaken the public sphere. And frankly, that's something that a lot of right-wing think tanks in Washington would like to see happen."

Submitted by Page Metcalf on February 17, 2011 - 4:30pm
NewsactivismdemocracyeconomyReal Economy Project
Tens of thousands of Wisconsin residents are flooding the State Capitol in Madison in protest of Governor Walker's proposed budget "repair" bill that would end 50 years of collective bargaining for Wisconsin workers. CMD reporters will be out providing live coverage of these historic events. Votes are scheduled for Thursday, February 17 and Friday, February 18. Send us your stories, photos and videos to editorATprwatch.org!

Wisconsin Governor Scott Walker alleges that dismantling public sector collective bargaining rights is made necessary by a $3.6 billion deficit in the next budget, and a $137 million shortfall this year. Setting aside the fact that the ability to negotiate shifts, seniority, benefits and conditions of employment would have a negligible impact on the deficit, and looking beyond Walker's deceptive claim that the alternative to union-busting is to kick 200,000 children off Medicaid (called "false" by Politifact), how deep is the state's economic crisis?

Representative Mark Pocan (D- Madison) has looked more closely at the numbers and writes that the $3.6 billion deficit is bogus. The alleged deficit is based on $3.9 billion in new agency requests
for the 2011-2013 budget, a 7.2% spending increase. However, these are merely requests, not dollars actually allocated or spent, and Pocan writes that the legislature never votes to grant 100% of agency requests: "I don't think there is a member in the legislature that would vote for [the requested budget increase]. In fact, I asked [Legislative Fiscal Bureau] Director [Robert] Lang when was the last time we gave agencies exactly what they requested and was told he couldn't think of one and he's been here decades."

For example, the state's non-partisan Legislative Fiscal Bureau reports that the difference between the amount requested for the 2009-2011 budget and the amount actually allocated was almost $3.5 billion, a sum nearly identical to Walker's alleged "deficit" for the next budget cycle. State agencies had requested a 9.7% increase but were actually granted a reduction of 2.6%.

For this year's budget, any shortfalls are a direct result of Walker's policies. The Fiscal Bureau told legislators in January that the state will end the year with a balance of $121.4 million. The $137 million deficit Walker uses as an excuse to crush collective bargaining results from the tax cuts and incentives Walker has pushed through since taking office; this includes the loss of $48 million in revenue from private health savings account taxation, a move lauded by the Wisconsin Manufacturers and Commerce business lobby (who spent nearly $1 million on Walker's campaign).
---------
7:10pm From Lisa Graves: Research indicates that it is possible to recall a governor in the state of Wisconsin. Article XII of the Constitution and Section 9.2 of the statutes allow a petition to go forward if a registered committee obtains enough signatures in a 60-day period.

How many are enough? The law requires 25% of the vote cast in the last gubernatorial election, or about a half million signatures. Specifically, at least 540,208 signatures, since 2,160,832 Wisconsin residents cast votes (Walker got 1,128,941 of the votes cast, and his opponent, Tom Barrett got 1,004,303) so it seems feasible numerically. But, it would require a big on the ground effort to gather that many signatures in a two-month period.

A facebook group has been formed to help push this idea forward: "540,000 To See Scott Walker out of WI," http://www.facebook.com/?ref=home#%21/RecallScottWalker
And, on Facebook, Russ Feingold "likes" this page.
---------
7:06pm Do you want to join your fellow citizens in Madison? Not sure how? Call our office at 608-260-9713 or visit AFSCME for more information.
---------
6:57pm Mary Bottari reports that there are fewer people in the Capitol tonight than there were last night because people are happy with their victory today in successfully postponing a vote on the bill. Organizers expect large crowds again tomorrow as truck loads of workers come in from around the state.
---------
6:52pm From Lisa Graves: People are waking up to the budget shell game being played by union-busters:

Here are some great points from Talking Points Memo:

"You can read the fiscal bureau's report here (PDF). It holds that "more than half" of the new shortfall comes from three of Walker's initiatives:

$25 million for an economic development fund for job creation, which still holds $73 million because of anemic job growth.
$48 million for private health savings accounts -- a perennial Republican favorite.
$67 million for a tax incentive plan that benefits employers, but at levels too low to spur hiring.
In essence, public workers are being asked to pick up the tab for this agenda. 'The provisions in his bill do two things simultaneously,' Norman says. 'They remove bargaining rights, and having accomplished that, make changes in the benefit packages.' That's how Walker's plan saves money. And when it's all said and done, these workers will have lost their bargaining rights going forward in perpetuity."


Here's what the Cap Times noted in an op-ed this week:

"To the extent that there is an imbalance -- Walker claims there is a $137 million deficit -- it is not because of a drop in revenues or increases in the cost of state employee contracts, benefits or pensions. It is because Walker and his allies pushed through $140 million in new spending for special-interest groups in January."
---------
6:51pm Mary Bottari reports that Ed Schultz is broadcasting live from the Capitol Square with a Wisconsin crowd as a backdrop. This is another opportunity to turn out. Nichols will be interviewed on MSNBC with Ed Schultz at 9:00pm CST tonight, Thursday February 17.
---------
6:48pm Mary Bottari reports that Ed Schultz is at the dead center of the Capitol rotunda surrounded by people and interviewing them one by one. He is talking to student leaders, Democratic party leaders, labor leaders, and right now he is talking to the drum crew that has been keeping the beat in the Capitol for the past three days.
---------
6:43pm Mary Bottari reports that Ed Schultz walked in and was greeted by a roar of the crowd.
---------
6:40pm Mary Bottari reports that Madison Capitol Times Editor John Nichols will be on CNN's Parker-Spitzer tonight, Thursday February 17 at 7:00pm CST.
---------
6:15pm From Lisa Graves: Walker calls boycott by Democrats a 'stunt'. A better definition of stunt might be calling stripping workers of their right to organize "budget repair."
---------
6:11pm From Lisa Graves: Interview with state Senator Chris Larson on breaking the quorum .
---------
5:58pm Erica Pelzek reports with some interesting photos from the events.

The front of this UW-Madison student's sign says "Even I Look Less Ridiculous Than Scott Walker." He is wearing a "grass skirt" and toga-type top made entirely of candy necklaces. The back of the sign: Middle Class: CLOSED FOR BUSINESS

-----------
5:41pm Mary Bottari reports that another crowd of thousands thronged around the Wisconsin Capitol this evening at a rally that began at