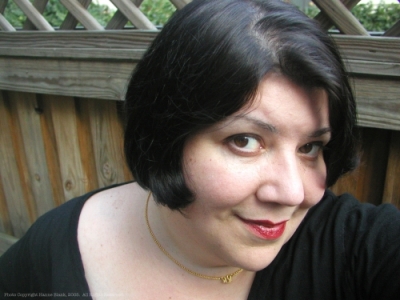 Hanne Blank is the author of Virgin: The Untouched History, Unruly Appetites and Big Big Love: A Sourcebook on Sex for People of Size and Those Who Love Them. She also edited or co-edited the anthologies
Shameless: Women’s Intimate Erotica, Best Transgender Erotica and
Zaftig: Well Rounded Erotica. Her writing has appeared in Penthouse, In These Times, Southwest Art, Lilith, Bitch: Feminist Response to Pop Culture, the Baltimore CityPaper, the Boston Phoenix and many others.

Trinie Dalton co-edited the book Dear New Girl Or Whatever Your Name Is, and edited the anthology Mythtym, about mirror horror. She also put out the books Sweet Tomb, Wide Eyed and A Unicorn Is Born. Wide Eyed was part of Dennis Cooper's Little House on the Bowery series, released by Akashic Press.

Ernest Callenbach is the author of the green utopias Ecotopia and Ecotopia Emerging. More recently he put out the books Living Cheaply With Style: Live Better and Spend Less and Bring Back the Buffalo!: A Sustainable Future for America's Great Plains.

Alex Koll performed in the "New Faces" showcase at the prestigious Montreal Just For Laughs Festival, garnering a "Best of New Faces"
nod. He appears on Comedy Central's "Live At Gotham" 2009 season, and has also performed at the SXSW, Vancouver, The Bridgetown Comedy Festival, SF SketchFest and the Bentzen Ball. As a filmmaker, Alex has created award-winning videos for IFC.com, SuperDeluxe.com, Revision3, and Rooftop Comedy.

Writers With Drinks has won "Best Literary Night" from the SF Bay Guardian readers' poll six years in a row and was named "Best Literary Drinking" by the SF Weekly. The spoken word "variety show" mixes genres to raise money for local worthy causes. The award-winning show includes poetry, stand-up comedy, science fiction, fantasy, romance, mystery, literary fiction, erotica, memoir, zines and blogs in a freewheeling format.
END_OF_DOCUMENT_TOKEN_TO_BE_REPLACED
Added to the calendar on Mon, Feb 14, 2011 1:58AM
Add Your Comments
Support Independent Media
We are 100% volunteer and depend on your participation to sustain our efforts!