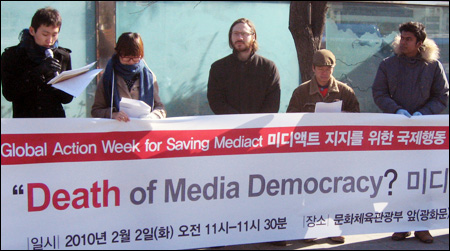 The Korea-US KORUS will be the largest free trade agreement in the US since NAFTA. This conference will look at the affect of NAFTA in the US and Mexico and the proposed KORUS trade agreement between the United States and Korea. How will the economic rules of this new agreement affect the conditions for farmers and workers are in Korea and for US workers and the environment. It will also look at the movement for democratic communication rights and media in Korea under the present administration. Education, healthcare, food and many other areas will be radically changed under this agreement and this will be outlined at this educational conference. Finally the conference will also look at the growing militarization of the Korean peninsula, why this is taking place and what this means for the people of Korea and the United States. This will be the first educational conference in the United States on this important proposed agreement.

Videos and Music
Will be streamed on the web live at http://www.labortech.net

END_OF_DOCUMENT_TOKEN_TO_BE_REPLACED
Added to the calendar on Sun, Feb 13, 2011 11:06AM
Add Your Comments
Support Independent Media
We are 100% volunteer and depend on your participation to sustain our efforts!