The Warriors of Qiugang Film Event 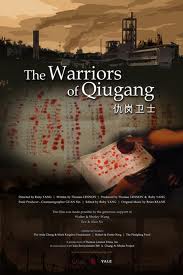 (San Francisco, CA - February, 2011) -- Pacific Environment, a not-for-profit environmental organization, is proud to announce the Academy of Motion Picture Arts and Sciences nomination of the film, The Warriors of Qiugang, featuring one of Pacific Environment’s partner organizations, Green Anhui , for Best Documentary Short.

The stirring documentary chronicles the five-year battle by the residents of the Chinese village of Qiugang to bring an end to the lethal pollution caused by factories adjacent to their tiny hamlet.

Oscar-winning documentarians Ruby Yang and Thomas Lennon follow a local farmer as he takes the lead in navigating a tricky maze of state-mandated environmental laws, local corruption, and evasive company representatives, guided by Ren Jingwen of Green Anhui. Come and be inspired by a grass-roots movement sparked by a letter-writing campaign by the town’s 5th graders.

Pacific Environment will hold a special screening of Warriors at San Francisco’s 9th Street Film Center on Tuesday, February 22nd at 6:00pm. Running time: 39 minutes. The event is open to the public. There is a suggested donation at the door, and seating is limited. There will be a reception with Pacific Environment after the film. For more information, contact skellman [at] pacificenvironment.org or call 415-399-8850 begin_of_the_skype_highlighting              415-399-8850      end_of_the_skype_highlighting x309.

END_OF_DOCUMENT_TOKEN_TO_BE_REPLACED
Added to the calendar on Wed, Feb 9, 2011 4:22PM
Add Your Comments
Support Independent Media
We are 100% volunteer and depend on your participation to sustain our efforts!