Add an Event
Newswire
Calendar
Features
Home
Donate
From the Open-Publishing Calendar
From the Open-Publishing Newswire
Indybay Feature
Publish to Newswire
Add an Event
Related Categories: U.S. | Media Activism & Independent Media
Oil Spill, Hairboom, BP and the Oilpocalypse
by Carol Brouillet (cbrouillet [at] igc.org)
Tuesday Feb 8th, 2011 4:06 PM
Lisa Gautier is the founder and president of the non-profit organization, Matter of Trust, that mushroomed in the wake of the Gulf Oil disaster as tens of thousands of hair and pet care salons collected hair for hairboom to protect the precious Coast. Here is the saga of the genesis of Lisa's efforts to meet dire environmental needs with the abundant materials produced by society and the desire of people wanting to help and preserve their communities and their world, thwarted by the BP PR department. 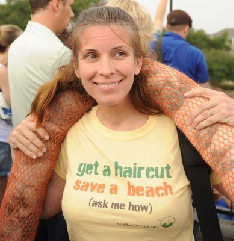 Hear Lisa, Thursday, 2-3 pm on the weekly Community Currency radio show on Progressive Radio Network. Lisa Craig Gautier is Founder and the President of Matter of Trust. They were the most prominent citizen-led task force in the wake of BP / Halliburton / Deepwater Horizon / Gulf oil rig disaster.

They started in 1998 as a non-profitt concentrating on Renewable Resources & Eco-enthusiasts. They like to mimic how Mother Nature integrates enduring cycles and provides access to necessities in abundance. They pioneered gathering surplus materials to create hairbooms to help clean up oil. In 2007 when there was an accident and an oil spill in San Francisco Bay, they helped provide booms to thousands of volunteers who responded quickly to threat to their beaches, their Bay, their environment.

In the wake of the Gulf oil disaster, overnight, their small non-profit ballooned into the most likely method for Americans to do their part in helping protect the Coastline. Tens of thousands of concerned citizens collected hair from salons in 30 countries. It was stuffed into pantyhose by hundreds of volunteers at the Gulf where tons and tons of “hairboom” were made and ready. The booms are a shockingly effective waste-stream method of soaking up oil, and BP’s boom department agreed. Then, to everyone’s surprise, BP’s $900-million PR department smeared and quashed the movement.

Lisa Gautier will join Dr. Riki Ott, Summer Burkes, Phoebe Sorgen, and I later on in the evening of February 10th at the Grand Lake Theater, Oakland, California, at the Oilpocalypse Now event, a benefit for the Gulf Coast Fund, the Coastal Heritage Society of Louisiana, and Ultimate Civics which includes the premiere of Black Wave - The Legacy of the Exxon Valdez featuring Dr. Riki Ott, who is also championing a 28th Amendment for the SEPARATION OF CORPORATION AND STATE.

http://communitycurrency.org/node/84
Add Your Comments
Support Independent Media
We are 100% volunteer and depend on your participation to sustain our efforts!