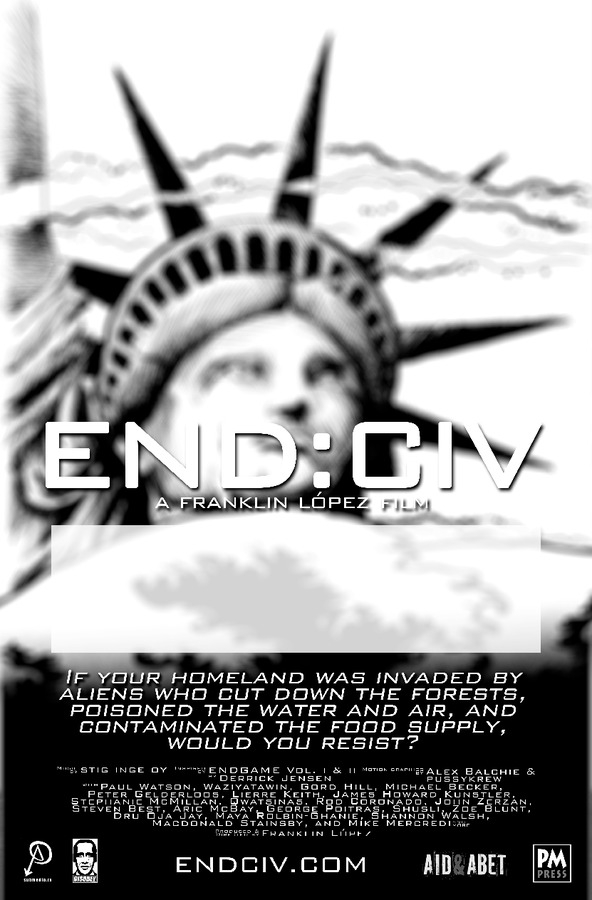 Import event into your personal calendar
Date:
Sunday, February 20, 2011
Time:
7:00 PM - 9:30 PM
Event Type:
Screening
Organizer/Author:
Santa Cruz Guerilla Drive-In
Email:
drivein [at] guerilladrivein.org
Location Details:
Unity Temple, 407 Broadway, Santa Cruz
The new film END:CIV, based on the writings of Derrick Jensen, by very independent film maker Franklin Lopez, will be screened in Santa Cruz on Sunday February 20th at 7pm at the Unity Temple, 407 Broadway. $5-10 donation (no one turned away, and the proceeds will benefit the film maker). The film maker will also be in attendance at the showing. This screening is also supported by the Santa Cruz Guerilla Drive-In.

END:CIV
This culture will eat you alive
Fight back; resist & survive

If your homeland was invaded by aliens who cut down the forests and contaminated the food supply, would you resist? If creatures from outer space made the water so poisonous you wouldn't dream of drinking it, would you try to stop them? If monsters released toxic chemicals that caused cancer in the people you love, would you fight back?

These aren't idle questions. It's happening now – except there are no aliens. The culture that's cradled us since birth is a killer.

END:CIV illustrates the brutality of a civilization addicted to systematic violence and environmental destruction, and the heroism of those who confront it head-on. Rapid-fire video-game graphics, interviews, war footage and satire mock the excesses of the global economic system, even as it implodes around us.

Based on the best-seller Endgame by Derrick Jensen, END:CIV begins with the harsh reality that all civilizations eventually end. The ancient Mayans, the dynasties of China, and the mighty Roman Empire, as long-lived and powerful as they were, inevitably crashed. Western Civilization is no different. It's coming down, but not fast enough.

Jensen asks: "If civilization lasts another one or two hundred years, will the people then say of us, 'Why did they not take it down?' Will they be as furious with us as I am with those who came before and stood by? I could very well hear those people who come after saying,'If they had taken it down, we would still have earthworms to feed the soil. We would have redwoods, and we would have oaks in California. We would still have frogs. We would still have other amphibians. I am starving because there are no salmon in the river, and you allowed the salmon to be killed so rich people could have cheap electricity for aluminum smelters. God damn you. God damn you all.'"

About Director Franklin López
Hailing from San Juan, Puerto Rico, López hosts “It’s the End of the World as We Know It and I Feel Fine," the world's most subversive news show. In 2005, his post-Katrina video remix “George Bush Don’t Like Black People” reached a million people and got a nod from the New York Times and the Washington Post. Wired Magazine listed subMedia.TV in its top ten online video sites in 2006, the same year López was hired to produce Amy Goodman’s Democracy Now!
"Franklin López is a fantastically talented filmmaker who has created a powerful and important film about the most important topic ever: how to stop this culture from killing the planet." – Derrick Jensen

"By far, the most routinely-praised contemporary media activist is Franklin López. His shows and films not only possess a distinctive look and feel, but they also contain a wicked sense of humor … López’s work engages in constructing a new vision where popular culture serves the interests of the poor and dispossessed, where humor is reignited within activism, and the D.I.Y. ethics of punk and hip-hop allow those with talent and gumption to be the media, once again." – Chris Robé, Pop Matters

END:CIV. The future depends on it.

EndCiv.com
subMedia.TV
END_OF_DOCUMENT_TOKEN_TO_BE_REPLACED
Added to the calendar on Tue, Feb 8, 2011 12:22PM
Add Your Comments
Support Independent Media
We are 100% volunteer and depend on your participation to sustain our efforts!