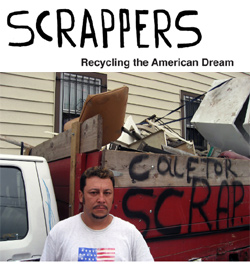 Scrappers
With co-director Ben Kolak in attendance for a Q&A.
Recently named by Roger Ebert as one of the 10 best documentaries of 2010!

Arriving from Honduras, Oscar found scrapping more enriching than other occupations open to undocumented immigrants. He searches alleys 14 hours a day to support his undocumented wife and American-born son. Yet without a driver’s license or insurance, Oscar’s trucks break down or disappear to the impound lot. Police run-ins leave him conflicted over which might be the lesser of two evils, deportation or remaining trapped in the land of opportunity.

Otis, age 73 and proud father of 12, learned scrapping over 40 years ago. With help from his third wife and her son, he searches out metal from appliances and garages, enabling them to escape a decrepit public housing project. Even in the face of slumlords and brain surgery, Otis’ wisdom and hustle light the way towards stability. But when the financial collapse causes metal prices to plummet, he faces near insurmountable obstacles to starting over.

"Scrappers" tackles the geography of a still-segregated city, the hidden lives of undocumented immigrants, and the complex economics of recycling through an examination of daily life.

"We’ve heard a lot about how the economic collapse hit the middle class, but this film is an urgent reminder that it has been far worse for those who were barely holding on to begin with. The film also raises by implication topics like our mind-bogglingly wasteful society, Chicago’s lame approach to recycling and the mixed signals given to people on the margins by the cops." - TimeOut Chicago

"Goes beyond the novelty of the profession to tackle tough questions of race, work, public and private housing, and immigration. The film is a moving portrait of the precariousness of life and work at the bottom of the American economy in one of the country’s wealthiest cities" - In These Times Magazine

"This superior verite doc opens a wide window onto the world of scrap-metal scavengers ... and directors Ben Kolak, Brian Ashby, and Courtney Prokopas make the most of their subjects’ humble heroism while resisting the temptation to sentimentalize them. Along the way they painlessly impart a whole lot of insight into the travails of undocumented immigrants, the persistence of segregation, and the workings of the globalized economy." - Chicago Reader

END_OF_DOCUMENT_TOKEN_TO_BE_REPLACED
Added to the calendar on Mon, Jan 17, 2011 9:26PM
Add Your Comments
Support Independent Media
We are 100% volunteer and depend on your participation to sustain our efforts!