Movies on a Big Screen presents Hausu at The Crocker hosted by Cinema Insomnia's Mr. Lobo 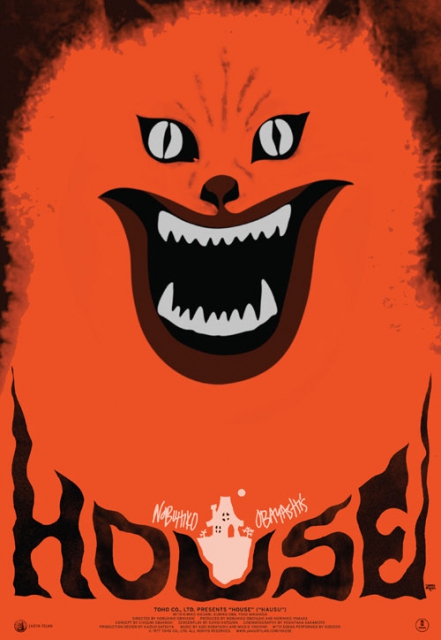 How to describe Nobuhiko Obayashi's 1977 movie "House?" As a psychedelic ghost tale? A stream-of-consciousness bedtime story? An episode of Scooby Doo as directed by Dario Argento? Any of the above will do for this hallucinatory head trip about a schoolgirl who travels with six classmates to her ailing aunt's creaky country home, only to come face to face with evil spirits, bloodthirsty pianos, and a demonic housecat. Too absurd to be genuinely terrifying, yet too nightmarish to be merely comic, House seems like it was beamed to Earth from another planet. Or perhaps the mind of a child: the director fashioned the script after the eccentric musings of his eleven-year-old daughter, then employed all the tricks in his analog arsenal (mattes, animation, and collage) to make them a visually astonishing, raucous reality. Never before released in the United States, "House" is one of the most exciting genre discoveries in years.

"That 'House' was made at all is a minor miracle. That it has returned, to critical acclaim and a new generation of fans, is a major miracle. Truly, this is some kind of wonderful. (Horrific, hilarious, disturbing but wonderful.)." - Austin Chronicle

"Delirious, deranged, gonzo or just gone, baby, gone -- no single adjective or even a pileup does justice to 'House.'" - New York Times

"It's not often that you'll see a movie and be speechless at what you've just experienced, realizing that you've seen something that is so crazy as to not only deny categorization but also give it a restraining order, but 'Hausu' does exactly that." - Chud.com

END_OF_DOCUMENT_TOKEN_TO_BE_REPLACED
Added to the calendar on Mon, Jan 17, 2011 9:24PM
Add Your Comments
Support Independent Media
We are 100% volunteer and depend on your participation to sustain our efforts!