Below is an email exchange between Oakland Police Captain David Downing, the head of OPD’s Support Operations Division, and OPD Officer Charles O’Connor. The May 8 communication is essentially a clarification for rules of engagement (ROE) for OPD officers preparing for the verdict in the trial of Johannes Mehserle. Former Mayor Ron Dellums and members of the city council had participated in previous demonstrations following Mehserle’s shooting of unarmed BART passenger Oscar Grant on New Year’s Day, 2009. In a telephone conversation earlier today, Capt. Downing said the participation of city officials had caused “operational difficulties.” 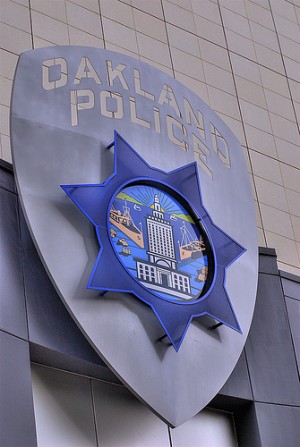 Also noted is the practice of confiscating video and photo equipment found on arrestees. Capt. Downing referred to this as standard practice for arrests because footage or pictures taken by suspects can be “fantastic evidence” if they happen to document someone committing a crime.

Downing did not comment on his remarks concerning Alameda County District Attorney Nancy O’Malley except for qualifying his words as “personal opinions, and certainly not those of the police department as a whole.” (Text after the jump.)

Charles,
To answer the first issue, I don’t think we will have a problem this time with council
members or the mayor. Earlier in the year I briefed the Mayor’s Office about New
Year’s Eve and New Year’s Day events. I advised that if city leaders join the
crowds in protest, that I would arrest them like everyone else. Dellum’s is lucky the
City did not get sued for what he did. His actions led directly towards additional
vandalism taking place to local businesses. I think they learned their lesson on the
last one. They have not been a problem since then. I will be ready to act if the
decision needs to be made.
Issue two, yes we can take telephones and video equipment as evidence and we
did that last year. Sometimes it works for us; sometimes it does not. Last year we
took their telephones and hardly anyone got charged. During the 4 Mar 10
education protest, we didn’t take any phones and they charged almost everyone.
However, it is an election year and Nancy O’Mally wants to get elected this
November, so she is going to do whatever we ask.
The problem with taking cell phones is that we do not have enough investigators to
process them all for evidence. You would have to run each one through a “cell
phone stripper” and review all the pictures and video from each one. It is a time
consuming process for misdemeanors and infractions; although, the greater benefit
is achieved by temporarily denying the opponent their communications. I will have
to weigh the option of taking telephones into evidence. Our ops tempo will dictate if
we have the time to recover and turn in the evidence.
Capt Downing 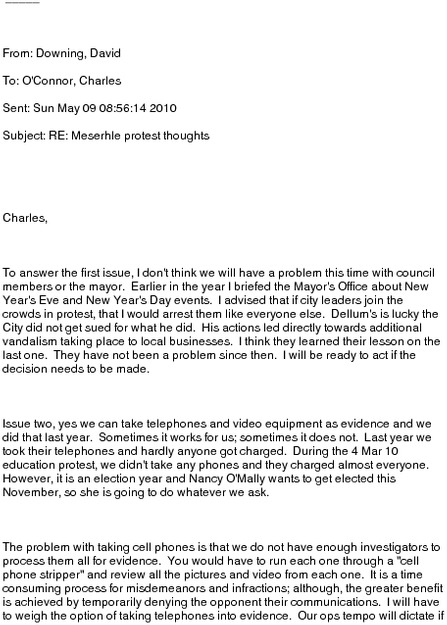 We should come up with a set of ROE for unexpected events. Last year when city
council and/or the Mayor decided to lead the protests, it stumped the field
supervisors and quite frankly the ICS were second guessing themselves.
Also we need to reinforce the rules of engagement for field personnel when
dealing with the protester s organized support members, ie their photo and video
documentors (can we confiscate their video, cell phones or still cameras for crime
documentation) legal councilors&

P.S.
I will be at the PAB on Tuesday at 3 pm working on other stuff waiting for a
community meeting to start should you need me to work on anything.
http://informant.kalwnews.org/2011/01/poli...
Add Your Comments
Support Independent Media
We are 100% volunteer and depend on your participation to sustain our efforts!