The surveillance of the Oscar Grant protests over the past two years extended beyond Oakland and San Francisco to Southern California, according to another set of internal Oakland Police documents and communications. 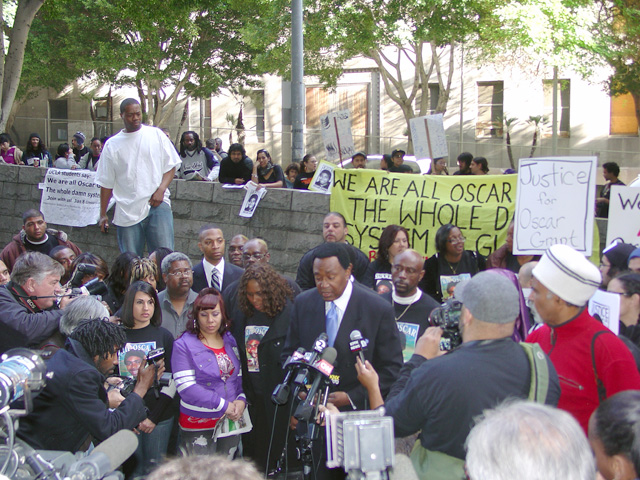 Dave Id, Indybay A demonstration outside the Los Angeles Criminal Courthouse in January, 2010

Last month, the Informant revealed the involvement of federal and state law enforcement agencies in policing the July 8th protests that following Johannes Mehserle’s involuntary manslaughter conviction for the January 1, 2009 shooting of Oscar Grant on the Fruitvale BART platform.

Mehserle’s trial was moved to Los Angeles in 2009 after defense attorney Michael Rains convinced a judge that the former BART officer could not receive a fair trial in the Bay Area. Oscar Grant’s family and his supporters joined up with Southern California activists to stage public demonstrations outside the Clara Shortridge Foltz Courthouse in Downtown Los Angeles. Throughout the proceedings, the atmosphere in and outside Judge Robert Perry’s courtroom was tense: Judge Perry ejected an Grant supporter for a verbal outburst, and there were scuffles outside the building in the days before the July 8th verdict.

Oakland Police were kept up to speed on events in Los Angeles through bulletins forwarded to them by the Northern California Regional Intelligence Center (NCRIC), the local fusion center. Furthermore, information about a planned July 6th protest in front of the Los Angeles courthouse where Mehserle’s trial took place was forwarded to OPD by Ronald Wakabayashi, the Los Angeles regional director of the U.S. Department of Justice’s Community Relations Service.

Emails show that Assistant Oakland Police Chief Howard Jordan communicated frequently with Sergeant Rick Lucas from the Los Angeles Sheriff’s Department, which has responsibility for LA County’s jails and courtrooms. Sgt. Lucas reported back to Jordan after demonstrations, as the emails indicate, and made efforts to identify individuals in the crowd for intelligence purposes.

“Yesterday, June 14, was a scheduled protest regarding the Mehersle trial. There were approximately 150 demonstrators in front of the building. Although they were loud, they were peaceful. I talked to one of the apparent organizers before the event started and explained the rules for picketing in front of the building. Although he refused to give me his name, he was cooperative and agreed to keep his folks in line. Almost everyone I talked to from the group was from the Southern California area.”

According to OPD emails, the LA Sheriff’s Department also assisted with training for the Grant protests.

The degree of law enforcement attention on the Oscar Grant protests has precedence. Homeland Security has monitored a number of civil protests in the decade following September 11. The Sacramento-based California Terrorist Information Center (aka CATIC) tracked anti-war demonstrations in Santa Barbara and Walnut Creek – even though U.S. Representative George Miller spoke at the Walnut Creek rally.

CATIC also played a role in the police riot at a 2003 antiwar demonstration outside the Port of Oakland. When protesters did not respond fast enough to a dispersal order issued by the Oakland Police Department, tactical teams fired tear gas and nonlethal projectiles at the crowd. A number of people were injured in the ensuing mayhem, and a subsequent lawsuit resulted in $1.25 million in settlements and an overhaul of OPD’s crowd control policy. 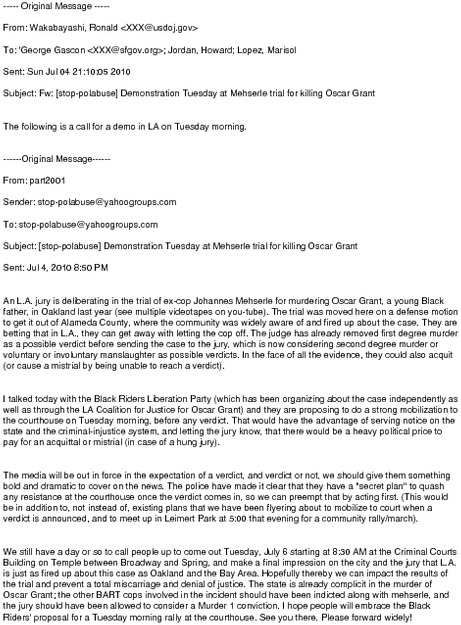 Subject: Fw: [stop-polabuse] Demonstration Tuesday at Mehserle trial for killing Oscar Grant
The following is a call for a demo in LA on Tuesday morning.

An L.A. jury is deliberating in the trial of ex-cop Johannes Mehserle for murdering Oscar Grant, a young Black
father, in Oakland last year (see multiple videotapes on you-tube). The trial was moved here on a defense motion
to get it out of Alameda County, where the community was widely aware of and fired up about the case. They are
betting that in L.A., they can get away with letting the cop off. The judge has already removed first degree murder
as a possible verdict before sending the case to the jury, which is now considering second degree murder or
voluntary or involuntary manslaughter as possible verdicts. In the face of all the evidence, they could also acquit
(or cause a mistrial by being unable to reach a verdict).

I talked today with the Black Riders Liberation Party (which has been organizing about the case independently as
well as through the LA Coalition for Justice for Oscar Grant) and they are proposing to do a strong mobilization to
the courthouse on Tuesday morning, before any verdict. That would have the advantage of serving notice on the
state and the criminal-injustice system, and letting the jury know, that there would be a heavy political price to
pay for an acquittal or mistrial (in case of a hung jury).

The media will be out in force in the expectation of a verdict, and verdict or not, we should give them something
bold and dramatic to cover on the news. The police have made it clear that they have a "secret plan" to quash
any resistance at the courthouse once the verdict comes in, so we can preempt that by acting first. (This would
be in addition to, not instead of, existing plans that we have been flyering about to mobilize to court when a
verdict is announced, and to meet up in Leimert Park at 5:00 that evening for a community rally/march).
We still have a day or so to call people up to come out Tuesday, July 6 starting at 8:30 AM at the Criminal Courts
Building on Temple between Broadway and Spring, and make a final impression on the city and the jury that L.A.
is just as fired up about this case as Oakland and the Bay Area. Hopefully thereby we can impact the results of
the trial and prevent a total miscarriage and denial of justice. The state is already complicit in the murder of
Oscar Grant; the other BART cops involved in the incident should have been indicted along with mehserle, and
the jury should have been allowed to consider a Murder 1 conviction. I hope people will embrace the Black
Riders' proposal for a Tuesday morning rally at the courthouse. See you there. Please forward widely! 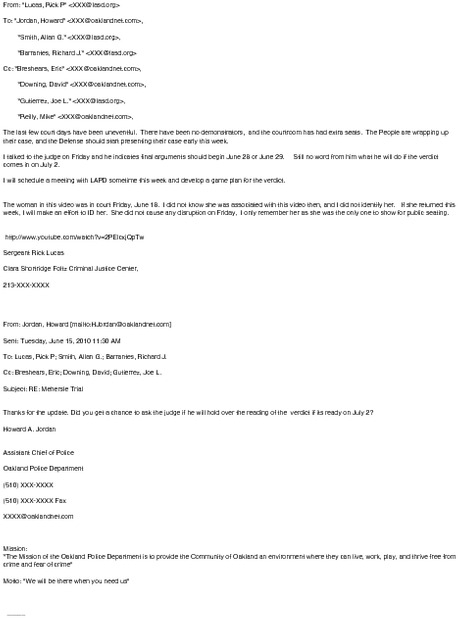 The last few court days have been uneventful. There have been no demonstrators, and the courtroom has had extra seats. The People are wrapping up
their case, and the Defense should start presenting their case early this week.

I talked to the judge on Friday and he indicates final arguments should begin June 28 or June 29. Still no word from him what he will do if the verdict
comes in on July 2.

I will schedule a meeting with LAPD sometime this week and develop a game plan for the verdict.

The woman in this video was in court Friday, June 18. I did not know she was associated with this video then, and I did not identify her. If she returned this
week, I will make an effort to ID her. She did not cause any disruption on Friday, I only remember her as she was the only one to show for public seating.

Thanks for the update. Did you get a chance to ask the judge if he will hold over the reading of the verdict if its ready on July 2?

"The Mission of the Oakland Police Department is to provide the Community of Oakland an environment where they can live, work, play, and thrive free from
crime and fear of crime"

Motto: "We will be there when you need us"

Yesterday, June 14, was a scheduled protest regarding the Mehersle trial. There were approximately 150 demonstrators in front of the building. Although
they were loud, they were peaceful. I talked to one of the apparent organizers before the event started and explained the rules for picketing in front of the
building. Although he refused to give me his name, he was cooperative and agreed to keep his folks in line. Almost everyone I talked to from the group was
from the Southern California area.

This same morning Doctor Conrad Murray, (Michael Jackson s doctor), appeared at this courthouse for a license revocation hearing. There were
approximately 100 supporters for Michael Jackson. Both groups appeared to join outside the building during the lunch time. The combined group was loud
but cooperative.

As soon as the media left, both groups began to disperse. By 1600 hours everyone was gone. There was no interruption to court operations. It should be
noted none of the demonstrators attempted to the courthouse.

Today, June 15, there were no demonstrators.

I will continue to give updates as the trial moves forward.
If you would like additional information please feel free to call.

Per our prior conversation, either myself or Sergeant Rick Lucas will maintain communication with you and keep you apprised of events and intelligence
related to the trial. Our contact information is:

In an effort to assist A/Chief Jordan and his Department with information and intelligence that may be beneficial in their preparation for the verdict, can you
provide him with the following information:

Note: LAPD will be able to advise if they have any video footage you (A/Chief Jordan) requested of demonstrators.

Σ Names of organized groups that we have identified at any of the proceedings, i.e., Black Riders, Nation of Islam, etc.

Σ A copy of the permit which the demonstration group pulled for Monday, June 14.

Σ Check with Judge Perry and find out if he will be holding the verdict over the weekend should the jury return a verdict at the end of the day on a
Friday.

A/S Chief Jordan& ..Per our conversation attached is the email addresses for Lt. Smith and Sgt Lucas& & they will provide you their phone numbers when
they start communicating with you& Chief Barrantes

I am Assistant Chief Jordan from Oakland PD. I met Chief Betky from your department at the MCC conference in Sun Valley. He recommended that I contact
you in order to establish a dialogue regarding our mutual plans for any post verdict incident that may arise from this trial. I would like to set up a time within
the next couple of days so that my staff and I can call you to coordinate our efforts. Thanks in advance. Look forward to talking with you.
http://informant.kalwnews.org/2011/01/la-o...
Add Your Comments
Support Independent Media
We are 100% volunteer and depend on your participation to sustain our efforts!