Gavin Newsom aka Caligula makes his exit with a bang - leaving this City in shambles.

by Francisco Da Costa
Gavin Newsom is leaving for Sacramento and should have left January 3, 2011. With Gavin's departure - he has left behind a strong nasty stench. A few dubious appointments - and sent shock waves where once there was law and order. Now, at the Four Season we have former Mayor Willie L.Brown Jr making decisions with Steve Kava - keeping our City divided. George Gascon who has been anointed the District Attorney - says he has the blessings of Rose Pak. Has the entire City and County of San Francisco - become China Town? Where for now Rose Pak makes drab decisions for San Franciscans? 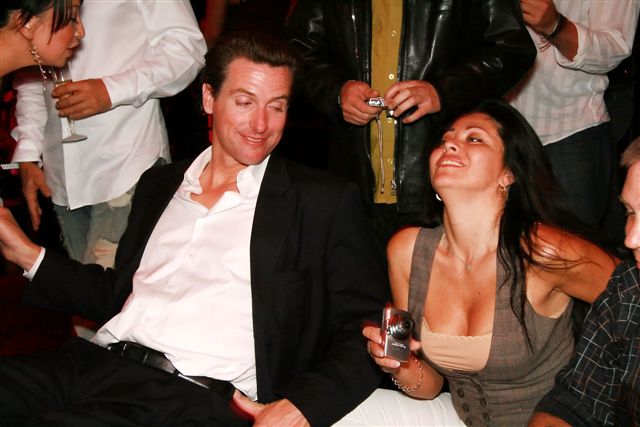 In the last 7 years - the great City and County of San Francisco has gone down the gutter.

It is all because of the deeds of Gavin Newsom. The Pacific Heights Mafia that has put their money - on this horse and does not care about decency, every day, hardworking, constituents.

Gavin Newsom thinks he is leaving this City with a bang. What is really happening is - he is leaving a STENCH that stinks to high heaven.

The sooner he leaves the better. Gavin should have been in Sacramento - January 3, 2011.

We still have buffoons in this City - the likes of some of our Supervisors like Carmen Chu and Sean Elsbern who think that Gavin Newsom has done great things for our City. The contrary is very true.

We have many candidates for the District Attorney's Office. Gavin chose to appoint, the outsider, George Gascon - at the eleventh hour.

Gascon's side sick Godown another outsider becomes the Interim Chief.

Gascon publicly makes a statement that he got the blessings of Rose Pak - and that factored in his decision to become the Interim Chief of Police. Give me a break!

Who is Rose Pak? Does she think that the entire City and County of San Francisco is China Town?
Rose Pak - was bold to say that she does not want Leland Yee to run for Mayor. Anyone but Leland Yee - if this is not a stupid statement - I do not know what else is.

Before Gavin Newsom left he made a deal with the Asian Museum.

Some $100 million of our City's money will be used to back the bad deals made by the Asian Museum.

A huge portion of the collection was donated by a Korean - Mr Moon - millions of dollars. I do not think any Chinese - be he or she American or Chinese from China - has contributed so many millions to the SF Asian Museum. Not a word about Mr. Moon and his donated assets.

But, here is Gavin Newsom giving away our store - to save the Asian Museum for mistakes made by them - by reorganizing their finances and falling prey to the current Economic crisis.

On Hunters Point and Candlestick Point that is a toxic cesspool - Gavin Newsom speaks little of the clean up, the abatement, and the mitigation. The entire Shipyard, barring Parcel A - comes under the jurisdiction of the U.S. Navy and the Navy is dragging its feet to do the clean up.

Much of the contamination is radiological in nature. Depleted Uranium was first test at the Shipyard. 95% of the Shipyard is land fill. Over 20,000 tons of Methane Gas spews in the air. One ton of Methane Gas equals - twenty two tones of Carbon Dioxide. So much for Gavin Newsom's so called Carbon Foot Print - that as usual is all talk and no real - walk.

Gavin brags that he made a deal with the Sierra Club, the Golden Gate Audubon Society - both organizations have not backed the community - but saw the need to interfere in the affairs of the Southeast Sector of San Francisco - to make some money. this after 8 SF Supervisors - that have backed Lennar on the Environmental Impact Report. All of them including Gavin Newsom have BLOOD on their hands.

Gavin Newsom makes no mention of Arc Ecology and Saul Bloom - who really is behind the fiasco linked to Yosemite Slough. Saul Bloom aka David Saleman stands to make some money, too - from this settlement - done behind close doors to apparently back Lennar - the Rogue Developer, that has filled Gavin Newsom - campaign coffers.

Lennar wants to build 10,500 homes on a Superfund Site and Gavin Newsom is doing all in his power to help this Rogue Developer - that is failing all over this Nation. Before Gavin exist he wants to prop Lennar - more because Willie L. Brown brought Lennar to town, sleeps with Lennar, and stands to profit - from Land Banking.

Why build 10,500 homes in the middle of Chernobyl? Decent hardworking people have no money, thousands of homes are in foreclosure. Now, Gavin Newsom wants to declare to us that 10,500 homes on a toxic cesspool - is required for this City?

Well, the Progressives in San Francisco could have been united and made some powerful, long term choices. But, as usual they divided themselves, acted as fools and now this domino affect - will go on and on.

If what I hear about Rose Pak - if this feisty woman dares to make silly statements but still has the ear of the former "thug" Mayor of San Francisco and others - dubious in nature - and if Ed Lee listens to the nonsense - our City will fall on bad times.

The SF Police Department has been divided. We know this.

Now, two outsiders George Gascon and Godown will in charge for a few months - divide the SF Police Department further.

Already, the Brass the top most SF Police Office - have left. Some were told to take early retirement or get fired - others demoted, and still other left to dry on the vine.

If have some good folks that can save San Francisco - Greg Suhr comes to mind. Morris Trabak is another that can stand his ground. Time will tell.

The sooner Gavin Newsom leaves the better. Caligula set the City of Rome on Fire. They say Caligula aka Gavin Newsom is leaving - but, you turn the corner and there you see his ass.

What an JOKE this City has become - with appointments straight from the Crazy House.