§GTFO partisan hack
by (A)
Saturday Jan 8th, 2011 7:21 PM
republicans = democrats = scum
Add a Comment
§i understand many different feelings
by deanosor
(deanosor [at] mailup.net) Saturday Jan 8th, 2011 8:03 PM
I have been an anarchist for 40 years so i think i understand (a)'s feelings. Yes the Democratic Party and the Republican party are both oppressive capitalist parties, and in certain ways the Democratic Party with its carrot is worse than the Republican's stick. (Democrats also have big sticks when they feel it's necessary). However this attempted assassination of a liberal Arizona congresswoman and the real assassination of her aides and a federal judge and the other murders including a child done by a probable right wing ideoloogue/terrorist calling out the names of the people he is attempting to murder seems so brutal. This in a state known for its brutality especially against immigrants.

The fascist Tea Party put this woman on the list for someone to kill her. Her opponent in the election had people use heavy weapons in a demonstration while saying she should be defeated. This is serious provocations.

We don't know have to like liberals to say the right wing should not be calling for their assassination and literally attempting assassinating and assassinating them. We need more vigils and other opposition to the right like the one in Santa Cruz. No Pasaran!
Add a Comment
§Rot in your own puss anarchist scum
by (D)
Saturday Jan 8th, 2011 8:13 PM
Oh, that's right...you already are.
Add a Comment
§@deanosor
by (A)
Saturday Jan 8th, 2011 8:27 PM
it's a shame that some innocent people got shot, and some of them are DEAD. this member of an "oppressive capitalist party" isn't dead. so why hold a vigil in her honor? the title of this event only bears her name, and she's just an oppressive capitalist. the implication that the life of an oppressor is more important than that of an innocent person is insulting.
Add a Comment
§"Come to the Clock Tower at 6:30 tonight"
by Original Title
Saturday Jan 8th, 2011 9:50 PM
Here's the first email to publicly announce the gathering. It was called quickly. Don't nit pit on how the title got posted here in haste.

>Let's come together as a community to protest the unspeakable
>violence in Arizona. Come to the Clock Tower in Santa Cruz at 6:30
>PM tonight (Saturday January 8). Please pass it on. 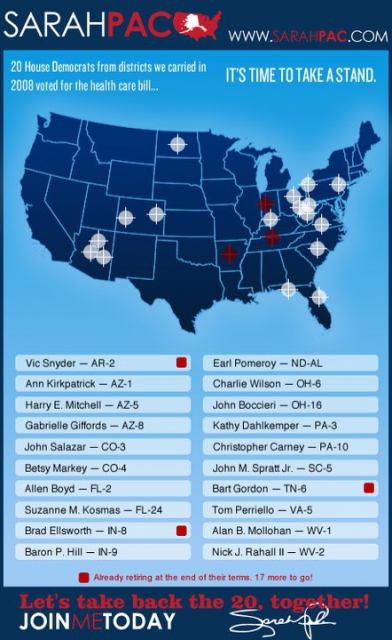 original image (442x720)
What I’d like to point people to is something that is in incredibly bad taste, and was in incredibly bad taste before this shooting. It is a list of targets, all marked with gunsights, that Sarah Palin released recently calling for Americans to “Take a Stand”.
http://ashleyfmiller.wordpress.com/2011/01...
Add a Comment
§this is a media stunt not a vigil
by (A)
Saturday Jan 8th, 2011 10:52 PM
"Bring a candle and a friend. Local media have been notified. "

please. drop the indignation. it's shameful that you're using this tragedy (the tragedy being that *some* of the people who got shot today happened to be innocent) as a political media stunt so you can trash the tea party. now don't get me wrong - the tea party sucks big time, but you liberal fascists are just as bad, if not worse. instead of making this about the people who got killed or injured today, you want to make it all about your political adversaries. there could be any number of reasons for the violence today, but the only one you seem to want to focus on is an election flyer. it doesn't seem appropriate to use to use an independent peoples' media outlet like this to play political games for the benefit of the democratic party.
Add a Comment
§So you agree the Asange vigil was a stunt?
by (D)
Sunday Jan 9th, 2011 7:59 AM
I see the local anarchist crew was featured on Channel 6 news in advance of their vigil, pimping the event. That makes it a stunt and against their political adversaries, the ruling government that is enforcing law against Asange.

Fool, everything is political. You showed your hand.
Add a Comment
§Tired of the fighting
by A-
Sunday Jan 9th, 2011 9:16 AM
I get so tired of people debating and arguing over the left or right. Both parties are so systemically corrupt, I could not in good conscious call myself either.

Its true much of the blame falls on the politicians such as Sarah Palin. But there is lots of blame to go around.

The comments I often see in the Senile offering up solutions such solutions as shooting the homeless, "illegal aliens" etc. etc, really do promote this type of violence. I hope this is a wake up call and something good will come of this.

Add a Comment
§the assange vigil was absolutely a stunt
by (A)
Tuesday Jan 11th, 2011 6:29 PM
but, unlike this giffords vigil, it was for a NOBLE cause that is in line with the guiding principles of this website. there's nothing noble about partisan hackery
Add a Comment
§anti-capitalist?
by UntimelyDivisions
Thursday Jan 13th, 2011 12:32 AM
I usually don't post online, but these comments have been nagging me for a couple of days. The insinuation is that the assassination attempt on Giffords is justified because she's a democratic member of congress. She's a capitalist. Let's put aside the one-dimensionality of the anarchism being applied here (ie. any participation in the political process of a capitalist state is misguided); that will have to be addressed when there is available space. I suppose what is striking is that because she's not an anarchist, she practices 'reformist' politics, shooting her is excusable.

We live in a time where it's a relevant question for anarchists what their response would be to a hostile take-over by the right. I agree that for devout anarchists there is never common cause to make with the left. But I think that adherence to anarchism should be questioned.
Add a Comment
Support Independent Media
We are 100% volunteer and depend on your participation to sustain our efforts!