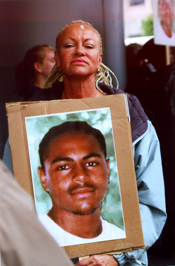 Right about at the 1:00 mark is when he gets shot. The guy was mildly agitated, but there was always a 10 ft distance to any of the three officers with drawn guns. There is a first pop when the red truck is going by, but the man doesn't sharply respond so I can't tell if that was the first shot.

Can anyone figure out why the officers claim they shot him? Reaching for his waistband? It might be two officers that fired shots here
Add a Comment
§threat level
by cp
Wednesday Jan 5th, 2011 8:23 PM
also notice that the closest officer, wearing a plainclothes fleece sweater, has a calm demeanor and doesn't have a gun drawn. After the first shots are fired, he still doesn't indicate alarm with his posture, and eventually slowly pulls some sort of tool from his pocket.
I can't figure out if the front officer with a rifle or the rear one who might be female, are firing shots.

The cumulative effect at the scene is similar to a few protest events I've been to. Sometimes, the officers are organized into platoons with a sargeant who gives orders through earpieces, but in other situations where some sort of calamity breaks out, it seems like each officer is deciding for themself how to respond. For example, I have seen cases where one or two officers are yelling at a crowd to move away or grabbing people, while on the other side of a line of parked cars, other officers are smiling and having calm polite conversations with members of the crowd.
Add a Comment
§background
by link
Thursday Jan 6th, 2011 8:30 AM
article link to above shooting - apparently what is happening is that the guy in the wheelchair had cut an officer with a knife earlier on. The first shot is a beanbag round. The guy appears to be partly disabled, but he is able to get up and walk around the chair. He might be using it because he tires easily.

http://www.latimes.com/news/local/la-me-0106-sf-police-shooting-20110106,0,1005986.story
Add a Comment
§Dont shoot me Bro ! I am disabled
by mesha Monge-Irizarry
Thursday Jan 6th, 2011 10:37 PM
The video is now viral, after the national police website
policeone.com
posted it.
If you viewed it,
you saw clear as day that the man drops the knife, spins his chair, 180 degrees, and has his back to the officers, who then immediately shoot him through the back of the chair.

That afternoon, Chief Gascon contended that the man was shot while he was STANDING, but had to retract the lie after the video went viral.

During the 6 minutes 17 seconds of the video, the man never stood out of his chair. We also do not see any stabbing. Until the end of the video, still no ambulance or city helicopter in sight.... Bean bags cause severe deep tissue trauma, and the man has a real bullet in his groin.

http://www.groups.yahoo.com/group/SPAAMI
Add a Comment
Support Independent Media
We are 100% volunteer and depend on your participation to sustain our efforts!