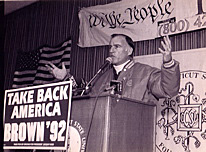 Jerry Brown's Class Role-Interview With Jack Heyman ILWU Local 10 Ex Bd
http://blip.tv/file/3568354
ILWU Local 10 Executive Board member Jack Heyman talked about the
role of Democratic Party candidate for governor Jerry Brown at the 2010
May Day march in San Francisco, California.
Jerry Brown supported the Oakland police attack at the Port of Oakland
on anti-war protesters and ILWU Local 10 & Local 34 longshore workers.
He is also linked to Goldman Sacks where he steering business to them
in Oakland, California.

YouTube - OEA Leader Gerson On Jerry Brown Support For Privatization & Union Busting
http://www.youtube.com/watch?v=z1QqePaO-DA
On March 20, 2010 at an anti-war rally on the anniversary of the Iraq war, Oakland Education
Association bargaining committee member Jack Gerson talked about the role of former Oakland
mayor Jerry Brown in pushing charters and the privatization of the schools in Oakland.
He also supports the campaign of P&F candidate Stewart Alexander who is running for governor.
http://stewartalexandercares.com/

http://blip.tv/file/3568354
Add Your Comments
Support Independent Media
We are 100% volunteer and depend on your participation to sustain our efforts!