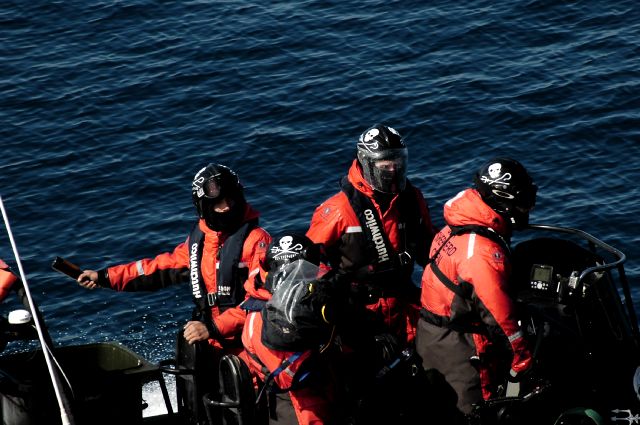 Photo: Sea Shepherd activist in a zodiac preparing to throw a bottle of
foul smelling rancid butter on board the Yushin Maru 3.
Image Courtesy Institute of Cetacean Research (ICR)

Sea Shepherd found the whaling harpoon vessels on New Year's Eve before any whaling could occurr. "We've got them before they were able to kill a single whale. They are not whaling today and our challenge now is to make sure they don't kill any whales in the coming days," said Sea Shepherd campaign leader Captain Paul Watson.

"What an awesome way to begin the New Year," said captain of the Gojira Locky MacLean of Canada. "Our three vessels dancing dangerously through the ice packs locked in confrontation with the three harpoon ships of the Japanese whaling fleet. It was both deadly and beautiful. Deadly because of the ice and the hostility of the whalers and beautiful because of the ice, and the fact that these three killer ships are not killing whales while clashing with us."

Sea Shepherd are still trying to locate the Nisshin Maru factory ship. In a dangerous ballet of ships and zodiacs amoung the ice flows the Japanese harpoon ships attempted to block Sea Shepherd's vessels pursuit of the Nisshin Maru factory ship. Sea Shepherd activists were pelted with blasts of freezing water from water cannon as they attempted to throw fouling lines and bottles of very foul smelling rancid butter on board the harpoon ships.

The Institute of Cetecean Research who overseas the Japanese whaling operation labelled the clashes as violent and criminal and called for the Netherlands and Australia, where Sea Shepherd's ships are flagged, to take appropriate action. According to the ICR media release "Neither injuries to the Japanese crew nor damage to the Yushin Maru No. 3 resulted from the activists' attack."

The ICR asserted in a media release (PDF) that "Japan's research whaling in the Antarctic is a perfectly legal activity carried out under the International Convention for the Regulation of Whaling (ICRW)." The legality of whaling in the Southern Ocean Whale Sanctuary is being challenged by the Australian Government in a case being brought before the International Court of Justice. Whaling by Japan is done through a scientific research loophole under the International Whaling Commission convention. The whale meat is commercially sold (or stockpiled) in Japan. Commercial whaling is currently banned by the IWC.

In previous years the whaling fleet has attempted to undertake whaling in the presence of activists but Paul Watson doubts they will attempt to do that again. "In 2009, the Japanese whalers tried to do just that. Three whales were killed and the loading of those three whales resulted in three collisions between harpoon vessels and the Steve Irwin." said Paul Watson in a recent blog, "They have not attempted to do that again since that time but if they attempt to do so this season, then they will be guaranteed further collisions." (See Sea Shepherd Rams Harpoon ship while under Sonic Attack)

"The whales that were killed in 2009 were slain from a distance of over twelve miles; the Steve Irwin had no way of keeping up with their faster harpoon vessels to block the killings. This season we have the Gojira and a faster longer-range helicopter to dog and harass the Japanese killing boats." Paul Watson said.

"Our objective is to save the maximum number of whales and to maximize the financial losses of the whalers at the same time." Captain Watson said in a statement from the Southern Ocean.

With three vessels in the Southern Ocean Sea Shepherd believe they will be able to hinder whaling for the entire season, which ends in early March with the onset of Southern winter storms.

"We now have a zero kill," said Captain of the Bob Barker Alex Cornelissen of the Netherlands. "We intend to do everything we can with the resources available to us to make sure that the kill remains at zero. We need to, and we shall keep them running."

In a corruption scandal that Greenpeace has been highlighting, the Fisheries Agency of Japan (FAJ) has admitted that their officials have received free whale meat from the company contracted to perform the whaling.

Paul Watson has called for support from the thousands of anti-whaling supporters to keep the pressure on Japan. "I am confident that the key to success is through continued persistence from people around the world calling Japanese embassies and consulates, demonstrating before Japanese embassies and consulates, as well as Sea Shepherd's efforts on location to continue to obstruct their illegal whaling and refueling operations."

Sea Shepherd list: What You Can Do to Help Stop the Slaughter

TAKE ACTION! There are many things you can do to help save the whales and dolphins from slaughter. Please join us in our continuing efforts by applying pressure to the Japanese government and their embassies and consulates worldwide to take action.

WRITE: Send a letter, e-mail, and/or fax the Prime Minister of Japan, the Minister of Fisheries, your local embassy or consulate and other Japanese officials to let them know that this barbaric slaughter is unacceptable.

In order to spread the word about what is happening in Japan, we need media coverage to inform the public on these important issues.

And you can support Sea Shepherd by volunteering or donations. 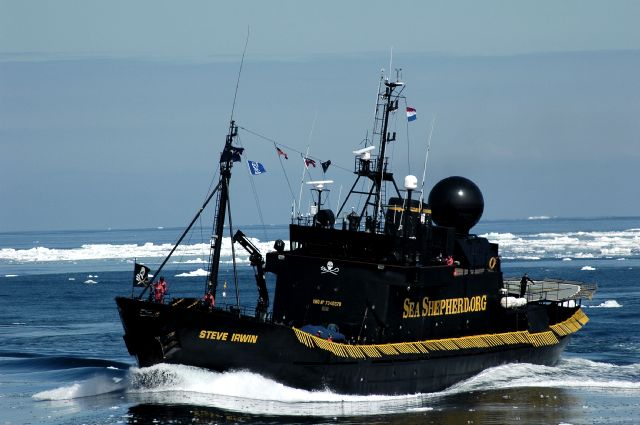 Image Courtesy Institute of Cetacean Research (ICR)
Add Your Comments
Comments (Hide Comments)
§damn fine work
by Sludge
Sea Shepard is one of the few honest and Committed environmental activist groups at the time then the Sierra Club, :Green"peace and Nature Conservancy have ALL SHOWN THEIR COMMITMENT TO THEIR CORPORATE SPONSOR'S INTEREST!
Add a Comment
§Mrs R Luckman
by Rere Huia Luckman
You are so RIGHT Sea Shepherd walks the talk. People dont realize the amount of good work they do. Like work WITH the government of the Galapogus to protect their local fishing industry, financially back independant carers for wildlife. And so much more. The reason governments dont want to take them to court is because the Sea Shepherd can and will be able to thro the legal book at them, and open up a HUGE can of worms no government wants us to see.
END_OF_DOCUMENT_TOKEN_TO_BE_REPLACED
Add a Comment
Support Independent Media
We are 100% volunteer and depend on your participation to sustain our efforts!