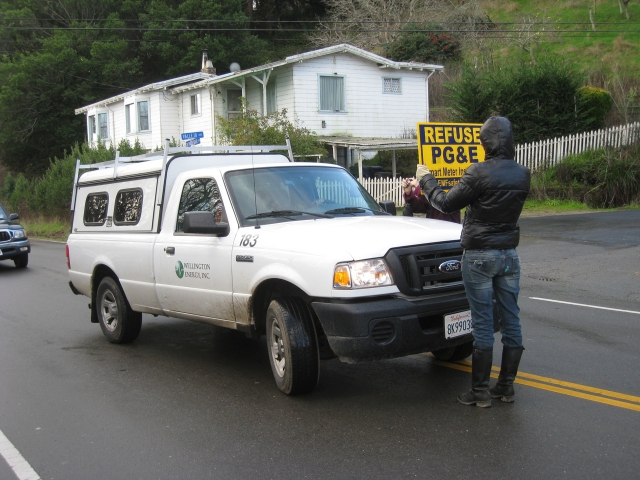 original image (1280x960)
According to Elizabeth Whitney, a local who was present at the scene, “there was a group of about two dozen residents blocking about ten Wellington Energy trucks on Sir Francis Drake Blvd this morning. After some indecision and confusion amid stopped traffic, sheriffs deputies arrived on the scene. Under the direction of the sheriffs, eight of the trucks cooperated in making U-turns and turning back while the group stepped aside. The remaining two trucks lingered at the location (in front of a local delicatessen) in conversation with the locals but then turned toward Inverness unexpectedly and caused the protest group to resume their blockade. Two local mothers were arrested and taken into custody for failure to disperse. Sir Francis Drake Blvd. is the only access to Inverness and the incident took place in Inverness Park, two miles south of the town."

Residents are reacting in part to numerous reports of people getting sick from the high intensity microwave radiation pulses from the new meters. Wireless impulses from the new meters radiate 24 hours a day and are approximately 2-3 times the intensity of a cell phone according to independent experts. Cell phones are increasingly being linked to brain tumors, and other health problems. Despite widespread calls for a moratorium until assurances can be made about the meters’ safety, PG&E- with the help of the industry backed CA Public Utilities Commission (CPUC)- continues to force the meters onto homes and businesses, even while a state-ordered investigation into ‘smart’ meter health impacts is under way. The utility has been refusing to remove meters that are making people sick, despite more than 2000 health complaints to the CPUC.

PG&E and its subcontractors Wellington Energy have been using more aggressive installation tactics, and according to locals, appear to be almost waging war on its customers. "Why are they in such a hurry? If this technology is safe and their goal is to reach out to the customer and listen to their concerns, then why are they trying to install smart meters as fast as possible in West Marin? Why aggressively roll out a technology on an unwilling customer base, it just doesn't make sense in terms of their PR." Said Scott McMorrow of Inverness.

According to Katharina Sandizell of Point Reyes Station, a mother of two, and one of the women who was arrested this morning, "PG&E is using shock and awe tactics on it's customers. Smart meters are being installed without public consent, without even knocking on doors to check if it's safe to turn off the electricity. They are rolling over civil liberties and getting these things installed as quickly as possible so that people don't have time to consider the implications or ask questions. If they have nothing to hide, then what's the rush?"

"We will continue to risk arrest to protect our children, our community, and our civil liberties...the only way that I know to stop installation of smart meters is to put a body between the installer and the meter, and I will continue to do this until I don't have to anymore. But I would rather be at home with my daughter" said Miss June of Inverness, a working mother who was also arrested today. 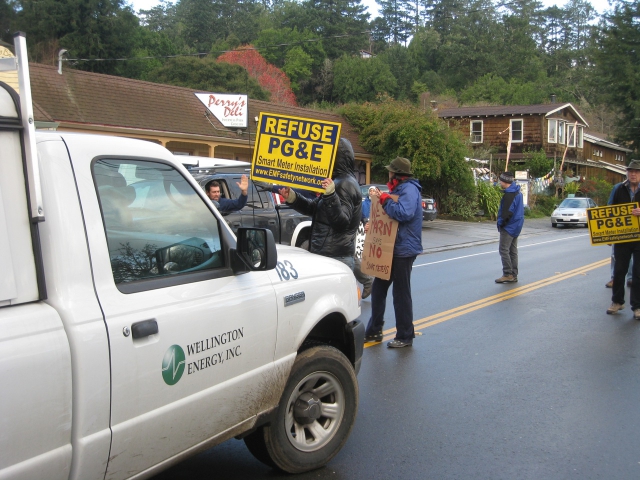 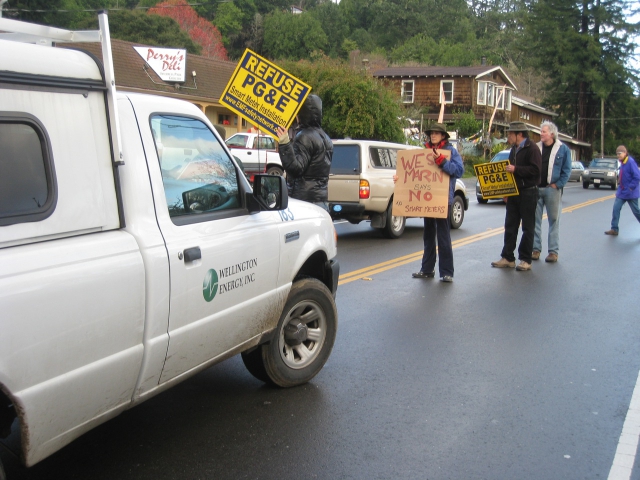 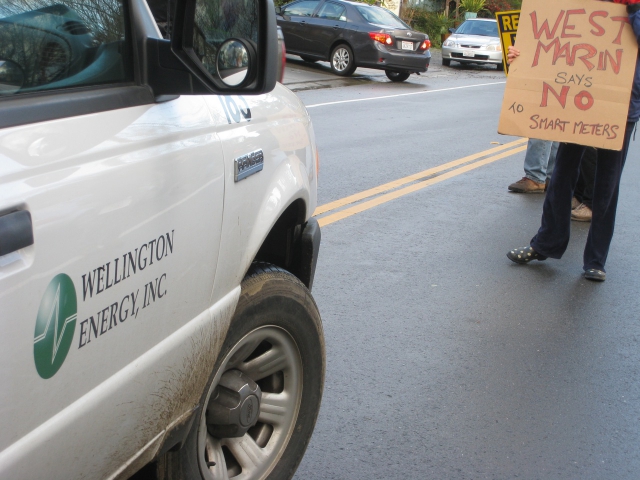 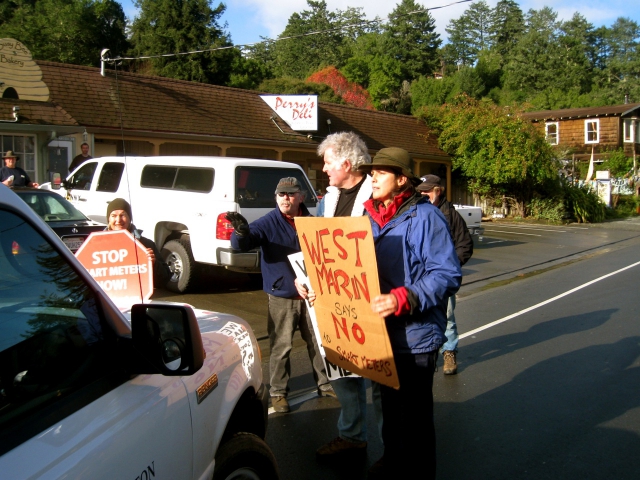 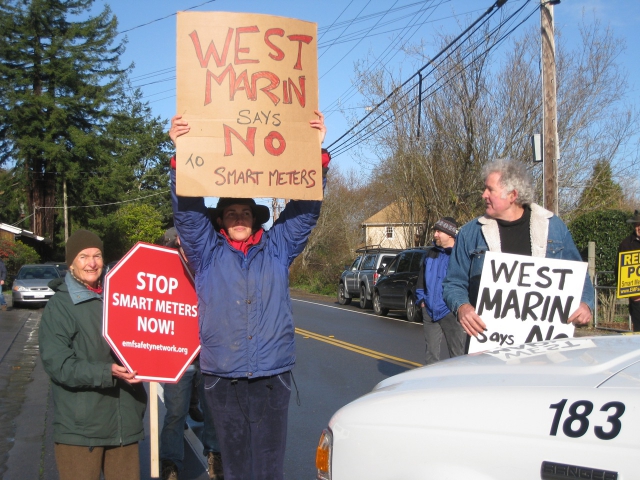 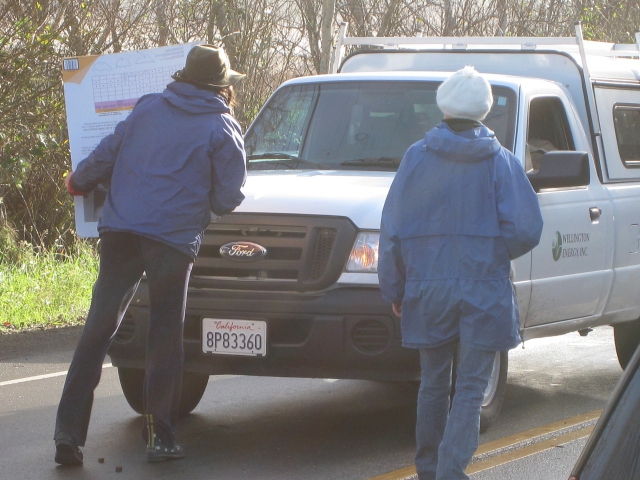 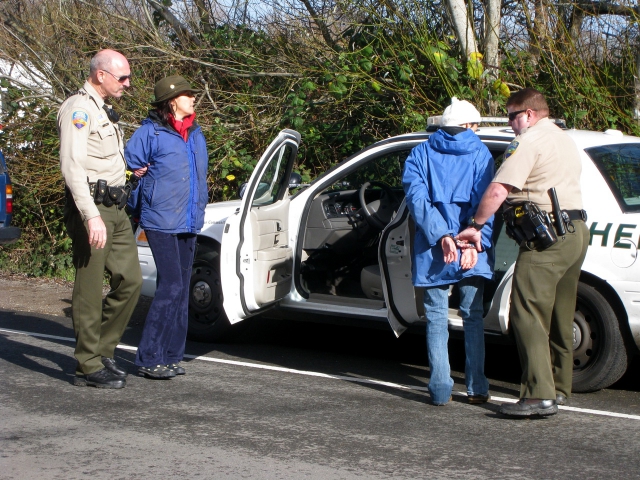 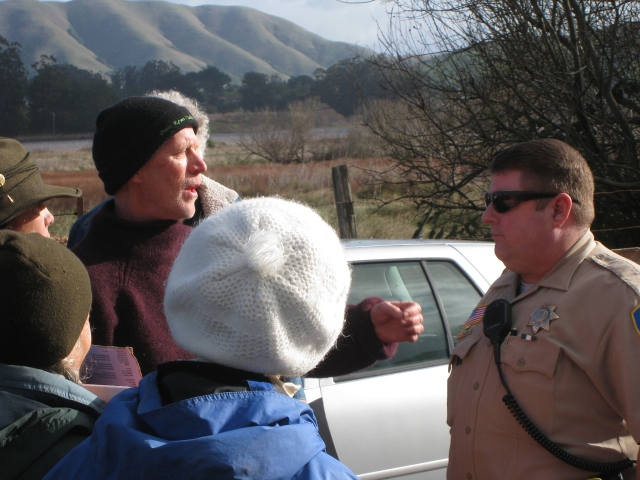 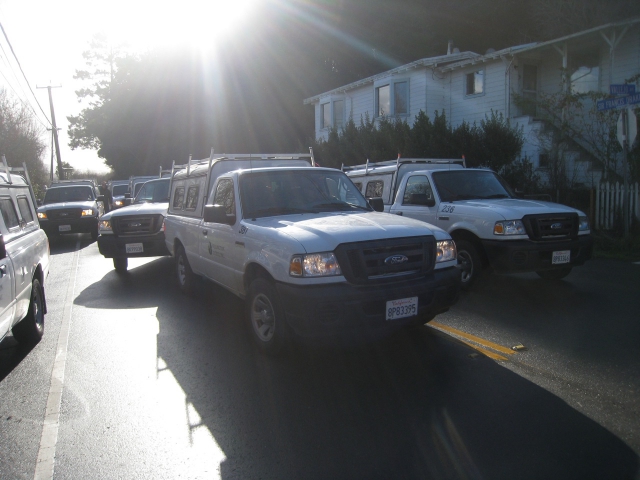 §Just wondering
by Miranda Bliss
Thursday Dec 30th, 2010 6:08 AM
I had a smart meter installed a few months ago and I see no problems with it. My bills are consistent with last years, too. Can someone explain, without hyperbole (Smart meters cause cancer!!!!) what is wrong with them?
Thx
Add a Comment
§reasons
by J Hart
Thursday Dec 30th, 2010 10:02 AM
Quick response:

- there is growing evidence that wireless radiation causes health problems, and people should be able to choose if they want this in their home environment. Indeed there are reports of people getting ill, with ringing in the ears, headaches, etc.

-smart meters will provide second by second information about what goes on in the privacy of your home, including when you get up, when you are away on vacation, etc.

-There was never any consultation- on such a massive project that we are paying for through increases in our energy bills, and for devices that are on our homes, this should have been a public discussion about this, with privacy guarantees and wired technology

-There are also a host of other problems including fire safety, electronic interference.

But the main one is health- just as we are learning that cell phones do indeed cause brain tumors, is it really moral to roll out this same technology to every single home and business in CA?

They say its safe, but what if they are wrong?
http://stopsmartmeters.org
Add a Comment
§TWO MOTHERS ARRESTED - MODERN DAY HEROES.
by RobertWilliams
Friday Dec 31st, 2010 3:14 PM
Nearly 100% of scientists NOT connected to industry have found cell damage or DNA breaks or violations to the blood-brain barrier from Wireless signal radiation, even from low levels of wireless signal radiation.

Nearly 100% of Industry scientists have NOT found any damage from wireless signal radiation.

This is the same pattern that existed with cigarettes prior to the government finally denying industry scientist BS and forcing labeling of health risks.

When dozens of top scientists in the world with the highest levels of integrity and many 100's more find something, that trumps (displaces) the reports of those who could not find it regardless of their numbers.

When Columbus (or whoever) found North America, that proves it exists regardless of thousands of previous attempts that did not find it or claimed it wasn't there.

So HEALTH PROBLEMS are a relevant factor and even insurance companies support that conclusion by no longer insuring wireless radiation exposure health risk.