Add an Event
Newswire
Calendar
Features
Home
Donate
From the Open-Publishing Calendar
From the Open-Publishing Newswire
Indybay Feature
Publish to Newswire
Add an Event
Related Categories: Santa Cruz Indymedia | Government & Elections | Health, Housing & Public Services | Police State & Prisons
Cynthia Mathews--Scrooge for the Season
by Becky Johnson (posted by Norse)
Friday Dec 24th, 2010 5:45 PM
Becky Johnson wrote and posted the following story on her website at http://beckyjohnsononewomantalking.blogspot.com/2010/12/cynthia-mathews-scrooge-for-season-2010.html#disqus_thread . There are more pictures and links there. However, I think Mathews' attack on community support for the homeless at this central downtown spot is an important issue. Her involvement is an important story. I invited her to come on my show to respond to Ronee Curry's lengthy interview on my radio show, and Mathews did not respond. While Mathews is (temporarily, perhaps) off the City Council, she continues to be a player--involved with Planned Parenthood, the Downtown Association, and downtown property. Her mean-spirited approach foreshadows the likely behavior of the Coonerty Council next year.
Cynthia Mathews: Scrooge for the Season 2010

Cynthia Mathews speaks at a community forum on behalf of public safety with Chief Howard Skerry looking on.


Santa Cruz, Ca. -- Cynthia Mathews, former member of the Santa Cruz City Council and former Mayor of the City of Santa Cruz is considered liberal and progressive. Yet she strongly supports anti-homeless legislation such as the Sleeping Ban (MC 6.36.010 section a) and initiated the "Move-Along" Law (MC 5.43.020 section two) which criminalizes political tables and street musicians after only 1 hour on a public sidewalk. Now she is going after the Calvary Episcopal Ministry, known locally as the Little Red Church, for reaching out to homeless people and youth with food, coffee, and spiritual assembly.

Mathews wrote a letter on City letterhead stationery April 5, 2010, and accused the church of allowing "the on-going presence of known criminals and drug dealers on church property." She attached her "evidence": a record of service calls from the Santa Cruz Police Department documenting "nearly 100 calls in just over one year" which she claimed is "utterly disproportional to other locations in the City." But is it?

Against over 85,000 annual 'calls for service' documented by the police, do 100 'calls for service" over a period of more than a year truly indicate serious problems or simply document calls by nearby NIMBY businesses and neighbors? And considering the record collected is for 532 Center St, aren't all calls for the across the street Farmers Marketand the Drum Circle included in this total?

Nowhere in the letter does Mathews reveal that she owns the house across the street. Nowhere does she reveal her general disgust at the presence of homeless people and her own attempts to drive them from both private property and public spaces.

In a Santa Cruz Sentinel article dated June 7, 2009, church attendance is reported to have dropped over the controversy. However,Audrey Nickel, a member of the Calvary congregation reports that as inaccurate. "

Cynthia Mathews owns and rents the former home of Hollywood actress, Zazu Pitts on Lincoln St.
approximately 50 weeks out of the year. My husband, as a lay Eucharistic minister, is one of the people who is responsible for keeping track of the number of people in the pews. And I can tell you that our average Sunday attendance is UP since Fr. Joel came to us."

Kevin McArgel also defends Father Joel Miller from the disgruntled members of the congregation who are complaining.

"I've met these “accusers” who have brought these ridiculous charges upon him and can say they are just that: RIDICULOUS. These very few individuals expect some kind of environment of very traditional behavior on behalf of those who come for guidance whether or not its some kind of simple compassion or just some sustenance like a little food."

Cynthia Mathews, who works closely with the Downtown Association, police, and the Downtown Management Corporation, laments Calvary's homeless outreach services claiming they indicate " ..a lack of buy-in by Church leadership to the collaborative problem-solving effort" which for Mathews means, fewer services, fewer hours when homeless people or street kids are allowed on the property, and trespass charges for those who remain on church property.

"In the gospel we’re told that Jesus sits down to eat with sinners and tax collectors. The worst people!” says Miller in a soft and nasal voice as he saunters between the well-worn pews. “So what we see is that Jesus loves people, he loves his neighbors, includes them and embraces them. That’s what we try to do here."

Local news reports paint Fr. Joel as going it alone with his ministry to the poor and homeless. But that is contradicted by former vestry member, Scott Galloway. He reports that Ronee Curry, a volunteer who had been managing a Monday Night Coffee House at the Elm Street Mission had been asked to relocate. Ronee approached Fr. Joel Miller of Calvary Episcopal Church, and Fr. Miller invited her to address the Calvary Vestry with her request to relocate her Monday Night “Coffee House” ministry to Calvary. Fr. Miller supported Ronee’s proposal, but the vote of the Vestry in favor of bringing Ronee and her program to Calvary was nearly unanimous. "

By June of 2009, Father Joel had already capitulated to pressure from Mathews and the City to allow police on the property to enforce 'no trespassing' laws effectively ending the use of the property as a place where young and homeless people could be.

Yet, this was not enough for Mathews.

Cynthia Mathews and Ryan Coonerty are heavily associated with the Downtown Association, where along with Ryan's wife, Emily Bernard, they are behind an effort to install old parking meters to collect spare change that would fund middle-class case managers for houseless people. Ryan himself pushed for legal protections for "statues" earlier which would make it a crime for REAL homeless people to beg within 14' of these special "charity" meters.

Coonerty and Bernard's 'Penguins' have already been fully implemented, and stand banning homeless people from sitting or begging within 14' of them in any direction. It's part of Ryan's Downtown beautification by promoting sculptures displayed on public property.

On June 5, 2010, Cynthia Mathews wrote her now-infamous Grinchish-Scroogian letter. Failing to acknowledge her own personal involvement on behalf of her own property values directly across the street, her intervention on behalf of her tenant, Rachel Daso, or that she was giving a one-sided account, Mathews sunk to a new low in promoting her anti-homeless agenda. Was the letter prompted by any City Council action? One wonders.

Mathews letter was largely responsible for Calvary Rector Joel Miller being admonished by his Diocese in a rare hearing known as 'Presentment' . He has hired a lawyer and is currently appealing that decision.


Ronee Curry, in order to take pressure off of Father Joel, took to performing her ministry in the streets by handing out food, socks, and handknit "beanies" to homeless people in front of Borders Books, but gained negative notice from current Mayor Ryan Coonerty.

"My feeling is that what they're doing is neither helpful nor compassionate. Instead of encouraging panhandlers and drifters to seek a better life, [they're] helping them subsist in misery," said Ryan Coonerty. Ryan's wife, Emily Bernard is thePresident of the Downtown Association, and an owner of Dell Williams Jewelry.

"Another inaccuracy is the implication that the Episcopal Church as a body brought the charges against Fr. Joel, " Parishioner, Audrey Nickels claims. "Rather, a small group of parishioners, in a highly unorthodox move, got a lawyer and brought charges against him in an ecclesiastical court." 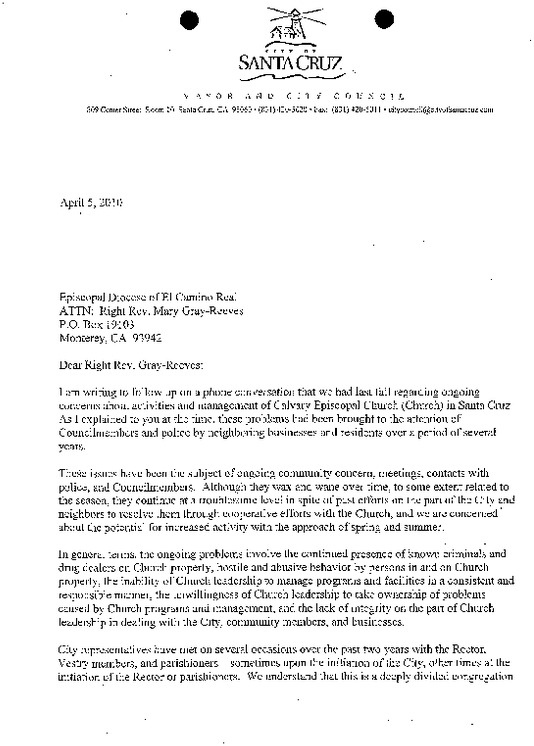 Letter to Episcopal Diocese of El Camino Real from Cynthia Mathews and related public documents...
Add Your Comments
LATEST COMMENTS ABOUT THIS ARTICLE
Listed below are the latest comments about this post.
These comments are submitted anonymously by website visitors.