Add an Event
Newswire
Calendar
Features
Home
Donate
From the Open-Publishing Calendar
From the Open-Publishing Newswire
Indybay Feature
Publish to Newswire
Add an Event
Related Categories: California | North Coast | Environment & Forest Defense | Government & Elections
Largest salmon run on Eel River in 77 years arrives after Tribal ceremonies
by Dan Bacher
Monday Dec 20th, 2010 7:19 PM
“Water and salmon hold sacred value among the tribes of the Round Valley, and both have been bankrupted,” according to Ernie Merrifield, past Round Valley Tribal Council member. “Like a person, if you block the free flow of blood in your veins you will die, just as PG&E’s dams are killing the Eel River.”

Photo of Feather Dancers of the Round Valley Indian Tribes by Friends of the Eel River. 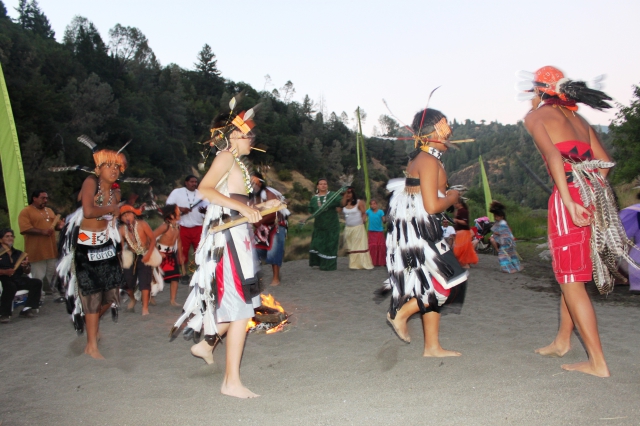 Over 2,300 fall run Chinook salmon, the largest number of fish counted at the Van Arsdale Fisheries Station on the Eel River below Cape Horn Dam since the Department of Fish and Game (DFG) began keeping records, arrived just a few months after members of the Round Valley Indian Tribes of Covelo conducted dances and ceremonies to bring back the salmon.

In July of 2010, the Feather Dancers of the Tribes joined Friends of the Eel River (FOER) at a swimming hole in the Hearst area, a few miles downstream of the PG&E Potter Valley diversion (PVP) to the Russian River.

“Prayers and dances began just before dusk and continued well into the night,” said Nadananda, Executive Director of Friends of the Eel River. “Dances and ceremonies that had not happened in more than 100 years were done on the edge of the Eel River, prayers to bring back the salmon and for return of water natural to this river system.”

The Eel River Prayer Ceremony and Summit, a historic 2-day event held on the banks of the Eel River near Willits on July 17-18, 2010, drew Eel River advocates from San Francisco to the Oregon border, including biologists, hydrologists, fishermen and leading environmental groups. “We will not sit idly by,” was the central message of the event.

The Round Valley Tribes, with century-long fishing rights on the Eel, have experienced “devastating economic and health-related hardships from the loss of the salmon fisheries,” according to a joint news release from the Tribes and FOER.

Saturday, July 17 was devoted to the blessing of the river, which included all those attending, as well as tribal dancing and a shared traditional tribal meal of salmon. Ironically, the salmon was not fish from the Eel River, but salmon offered by an Alaskan Tribe in recognition of the plight of the Eel’s nearly collapsed salmon fisheries.

“On Sunday, the participants, unwilling to rely solely on the agencies of the federal and state government to force PG&E to modify the flows on the Eel River, met to present observations and research on a wide range of legal and scientific issues that effect the Eel River and the health of its nearly 4000 square mile watershed, with the heart of the matter being the need to immediately increase the flows of water during peak late summer and fall spawning months,” stated Nadananda.

“In the face of a very grave situation for the fish, all of the people attending the Eel River Prayer Ceremony were deeply inspired and empowered not to sit idly by,” she emphasized. “The sacred Tribal dances and prayers were so profound that it infused all of those attending with strength and perseverance. The amplified energy among the group was infectious.”

“Water and salmon hold sacred value among the Tribes of the Round Valley, and both have been bankrupted,” according to Ernie Merrifield, past Round Valley Tribal Council member. “Like a person, if you block the free flow of blood in your veins you will die, just as PG&E’s dams are killing the Eel River.”

Several months after the ceremony and summit, the fall run of Chinook surged in on the first rains by the thousands, the largest run on the river in 77 years. In addition to the fish counted at Cape Horn Dam, thousands more redds (nests) were counted below the dam and the confluence of Outlet Creek.

“Some swam up other tributaries, but not in the unbelievable numbers we saw in the area described,” Nadananda stated. “In previous years runs were down to single digit numbers and then increased to 400 for several more years.”

"Although the Chinook count for this season appears high (the highest recorded since 1933), caution should be taken when addressing the remainder of the Eel River watershed," noted Scott L Harris, DFG Associate Fish Biologist. "We certainly haven't seen record numbers of Chinook in the Tomki Creek or Outlet Creek watersheds."

What are the reasons for the increased return of chinooks to the main Eel this year?

“Yes, ocean conditions are good, and more water released into the river starting in 2006, along with better river management practices, account for a lot of what we have seen," concluded Nadananda. "However, one is hard pressed to disregard the presence of prayer. Hopefully this return to the Eel River will continue increasing for years to come."

The fish that return to the main Eel below Cape Horn are a fraction of the fish that return to the huge watershed, the third largest entirely in California. The river and its tributaries total 3,448 river miles, flowing through five counties and many diverse habitats, ranging from high elevation conifer forests to coastal redwoods. The South Fork of the Eel is renowned for its wild winter steelhead fishery, while the Middle Fork is one of the last sanctuaries for summer-run steelhead in California.

Eel River salmon and steelhead have struggled against habitat destruction caused by logging in the geologically unstable watershed, road building, floods and water diversions for decades. The illegal introduction of Sacramento pike-minnows from Lake Pillsbury has also played havoc with the native fish populations.

Steelhead numbers during the early-1960s were estimated to have been 82,000 spawners for the entire Eel River system. The DFG counted thousands of steelhead at Van Arsdale every year until 1963-1964 when the run plummeted to 846 fish. This was the year that record floods devastated the heavily logged watershed – and the runs have never really recovered since then.

The report said counts of up-migrating adult steelhead at the Van Arsdale Fish Facility in the upper mainstem Eel during the period 1967-1977 ranged from 2 fish in 1976, a drought year, to 1,863 fish in 1970, averaging about 725 fish annually. The DFG counted 324 steelhead last year.

On May 4 of this year, the State Water Resources Control Board (SWRCB) under the Schwarzenegger administration rejected FOER's petition to increase water flows on the Eel River. This is water that FOER believes is critical for the survival of state and federally listed endangered salmon on what was once the third largest salmon and steelhead producing river in California.

About Friends of the Eel River:

FOER was founded in 1994 and has been acknowledged and praised for its devotion to the monitoring, defense and advocacy of the Eel River watershed. Through the education and support of residents, businesses and visitors in this third largest watershed in California, FOER has become a formidable challenger of large corporations and public agencies in the interest of preserving California’s North Coast public trust resources.

FOER is supported by over 2500 members, a solid volunteer base, a large contingent of scientists and fisheries experts, sportfishing alliances, river enthusiasts, and concerned citizens who are working together to meet the challenges to the Eel River’s watershed integrity.

About the Round Valley Tribes of Covelo:

The Round Valley Reservation consists of the Covelo Indian Community. This community is a culmination of small Tribes; the Yuki, who were the original inhabitants of Round Valley, and the Nomlacki, Wylaki, Lassik, Sinkyone, Cahto, Kabeyo, Shadakai, Yokayo, Shokawa, Kashaya, Habenapo, Wappo, Concow Maidu, Colusa, and the Achamawi, who arrived during the forced march of Nome Cult 1863.

The Round Valley Reservation borders three sides of the Eel River; the main stem, the Middle Fork and the North Fork. Fishing and water rights were granted to The Round Valley Tribes in 1873, under treaty with federal government. The Eel River and its salmon and steelhead are sacred in the tribal community; it feeds life to all “civilization” on the river. Without adequate water in the main stem of the Eel River, there is not enough water for spawning salmon and steelhead to reach the Middle Fork Eel.

For more information, go to: http://www.rvit.org.
Add Your Comments
LATEST COMMENTS ABOUT THIS ARTICLE
Listed below are the latest comments about this post.
These comments are submitted anonymously by website visitors.