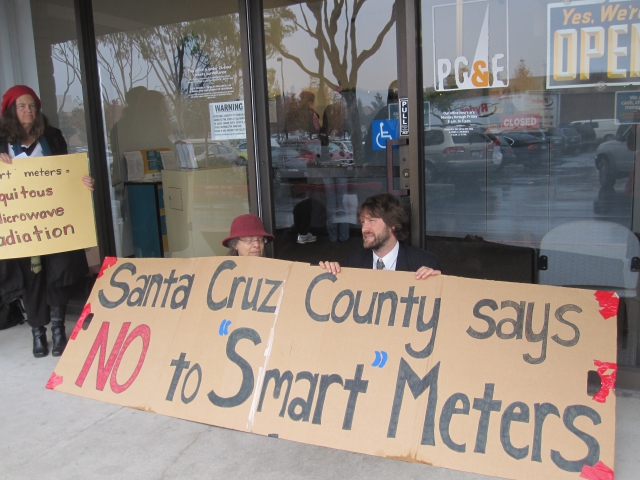 Hundreds of PG&E customers- outraged about the health damage caused by wireless ‘smart’ meters- today ramped up protests, testifying at county government meetings and shutting down payment centers in both Santa Cruz and Marin Counties, demanding an immediate halt to the program. Protesters are also angry about PG&E’s attempts to cover up the growing health scandal and recently revealed espionage carried out against their own customers concerned with increasing reports of nausea, headaches, and bouts of dizziness from the meters. The protesters, backed by 22 local governments, and an increasing number of scientists and medical professionals, are demanding that PG&E halt any further installation of smart meters. A statewide investigation is underway into the health impacts from the wireless radiation from the meters, which are suspected of sickening thousands throughout the state.

On Monday, PG&E sent a number of internal e-mails that it had released to the CPUC, attempting to offer up a sanitized version of the emerging scandal to the regional media. Despite the fact that PG&E had censored the release, there are still a number of alarming revelations:

1) It has become clear that PG&E gained access to private e-mail lists to obtain information about how much their customers knew about health impacts from the new meters, what their political activities were, their movements, personal details and other private information.

3) An employee that PG&E apparently ordered to monitor the activities of protesters said in a report back to head office, “This is fun- no one said ‘espionage’ in the job description”

4) Confirming that PG&E has declined to order protesters arrested who are obstructing their business, to avoid media attention, one of the e-mails states, “No coffee and donuts. (police arrests) We will give them the platform they are looking for if we do that.”

“Not only are PG&E spying on their own customers in an attempt to cover up health damage from their new meters, they are also insulting our law enforcement officers with an old tired stereotype. Reading over these e-mails, it is clear that PG&E senior officials whose job it is to deliver reliable energy supplies and keep the public safe, are just a bunch of overgrown frat boys who think the health of California families is just a game. The time for removal of ‘smart’ meters and publicly run utilities is now.” said Joshua Hart, director of Stop Smart Meters!

Video of the protests will be available shortly at http://stopsmartmeters.org/ 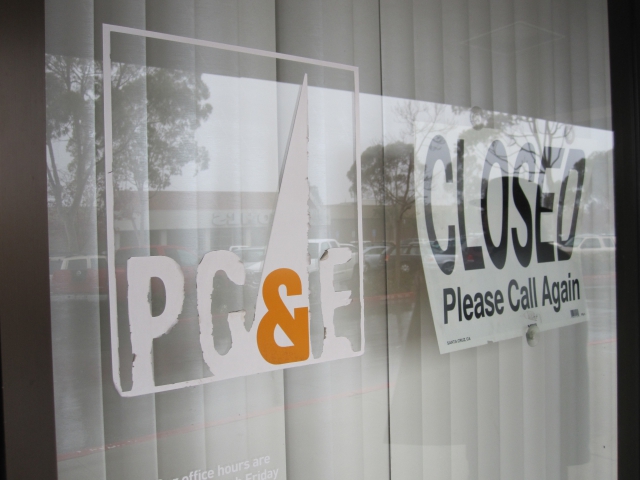 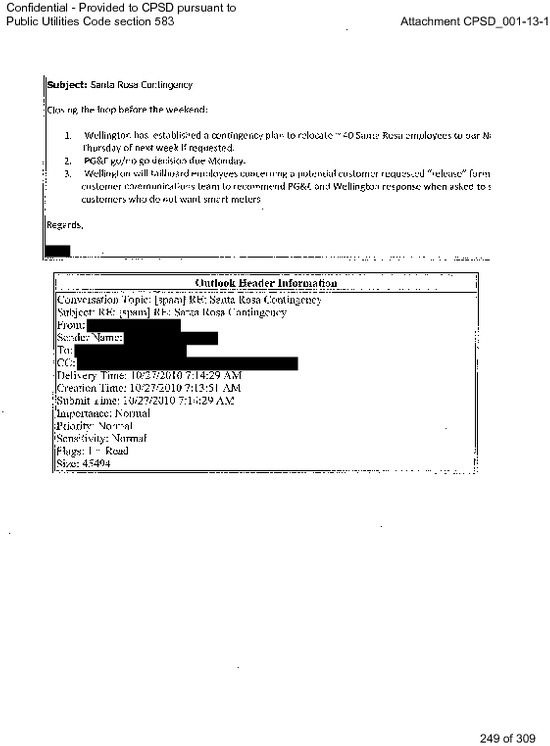 Why are these people complaining about smart meters? Do they think that they deserve better than those who have already been killed by PG&E?

Do these people think that their children deserve to live when the lives of other children have already been destroyed by PG&E?

I just don't understand these people. PG&E has a record of killing and sickening people throughout the state and that's not going to change. Why don't these people just accept it, like the rest of us?

Add a Comment
§This is a reason why
by A
Friday Dec 17th, 2010 8:57 PM
I have to assume your being satirical in asking. Or you are very upset. I agree PGE has killed people. Certainly in San Bruno they recently killed six. If people do not stand up nothing changes. To simply accept it because others have been hurt is ludicrous. People fight not just for their own health and I would add privacy issues, but they also fight because of the reasons you mention. Because they see it happening and headed there way. They fight for those who came before them and those that come after. Nothing changes if we all simply accept what is wrong.
PG&E is a political machine. They have allot of clout and power on the hill spending 600% more in 2010 on lobbying than 2009, the most any utility company has spent on lobbying, ever. That says allot. They are big, they have power and politicians owe them.
See http://www.indybay.org/newsitems/2010/12/17/18666872.php

It is my belief some of the protesting efforts should be aimed at politicians that accept these funds. Particularly those on the left that may find it uncomfortable to have a bunch of protesters in their office who may represent part of their voting base. They have power if they chose to use it.

Add a Comment
§Write your representatives
by Concerned
Wednesday Dec 22nd, 2010 11:57 AM
I hope everyone who has issues of health, privacy, or even national security from the roll out of smart meters please write your representatives in California. PGE has spent 600% more on lobbying this year than last, more than any utility company in the history of lobbying. Its not just PGE. The roll out is planed nationwide. Barbra Boxer received the following ( found Below) just from Energy companies, via PAC's, Political action committees. Please take a moment and email her at her website and let her know how you feel about Smart Meters. http://boxer.senate.gov/
Thousands of companies and special interests groups have business before Congress each year or lobby Congress directly.

Add a Comment
§How To Turn Your House Into A Microwave Oven
by Faraday's Cager
Thursday Dec 23rd, 2010 6:36 AM
Using a wireless device in a shielded place is an extraordinarily stupid idea regardly whether it is a communications tool, a consumption meter, or a wire(less)tap. There may be some moral difference as to whether your house is being turned into a microwave oven by individual choice, by corporate dependency, or by government doing it against your will, but technically it is all the same: The more shielded the place is from outside radiation, the more radiation will be produced to reach outside, and the bigger the collateral damage for any organic life inside the shielding.
Add a Comment
§Smart Grid Grant Program - Our tax dollars at work
by A
Thursday Dec 23rd, 2010 8:21 AM
Read full article here.
http://www2.timesdispatch.com/business/2009/aug/07/domi07_20090806-220005-ar-34963/


Dominion Virginia Power is seeking the money from the U.S. Energy Department's "smart-grid" grant program, which offers to cover up to $200 million of the cost of installing new technologies to save energy by improving operations of the nation's electricity transmission and distribution systems.


Smart meters are a key element of an energy-conservation plan that Dominion Virginia Power filed last month with the State Corporation Commission. The company asked the commission to approve a 0.9 percent rate increase, amounting to 95 cents a month for a typical customer using 1,000 kilowatt-hours, to cover the cost of new equipment for the program, including the meters.


The energy-conservation plan could save customers more than $1.2 billion over 15 years, as more efficient transmission of power cuts usage by about 2.4 million megawatt-hours a year by 2024.


The meters also should mean quicker reporting of outages and make it easier for people to install windmills, solar panels or other kinds of environmentally friendly electric generators at their homes and businesses, the company said.


Dominion Virginia Power estimated that the energy savings and promotion of green technology would mean a reduction in carbon dioxide emissions equal to taking about 165,000 cars off the roads.


Gov. Timothy M. Kaine, whose campaign and inaugural committee received nearly $106,000 from the utility's parent, Dominion Resources Inc., wrote in support of the company's application, saying it would mean savings in energy use and carbon emissions.


The power company also had letters of support from Sen. Mark R. Warner, D-Va., and seven members of the House of Representatives. Dominion Resources has given them a total of more than $17,000 this year, according to Center for Responsive Politics data.

Add a Comment
§Faraday
by a
Friday Dec 24th, 2010 8:46 AM
Its not true, you can shield devices, many companies do. The problem with say attempting to use a cell phone in a cage, why you would i'm unsure, would only occur if the antenna touched the cage. Drop your phone in an electronic insulting bag, instant no signal. In a cage, you could make a problem if its not grounded properly. But people do shield, and it is effective. How do you think govt buildings are made cell proof? Using the same technology as a Faraday cage.
Add a Comment
§PG&E Smart Meter emails about protestors
by repost
Monday Jan 3rd, 2011 6:14 PM
Seems to be a collection of emails collected by, I assume, PG&E, documenting the protests against them. In one place the protesters are described as "insurgents". I was doing a search of smart meters on the Merc News and just came across this file.

The file is an image so I can't copy and paste it, otherwise I would.\

In an escalation of protests against Pacific Gas and Electric Co.'s SmartMeters, opponents Monday and Tuesday jousted with employees of a company PG&E hired to install the meters in Inverness.

"Yesterday we got a report there were four Wellington Energy trucks going towards Inverness," Katharina Sandizell, of Point Reyes Station, said Tuesday. "We have a phone tree, so we got together and basically stopped them."

Sandizell, who has children ages 3 and 6, is co-director of West Marin Citizens Against Wireless Smart Meters.

Sandizell said Wellington Energy, hired by PG&E to install the meters, returned to Inverness on Tuesday with eight trucks, twice as many as on Monday.

Paul Moreno, a PG&E spokesman, said, "We remain committed to reaching out to our customers to provide them with information about the SmartMeter program. We've been doing that in a variety of ways for many months in Marin, and we continue to invite our customers who have any concerns whatsoever to give us a call."

Moreno said PG&E has postponed installation of SmartMeters in some instances when customers call. But he said there was no certainty future requests would be granted.

"Eventually all the meters will be upgraded," Moreno said. "In the meantime, we are continuing to review options for a non-wireless smart meter."

Dan Morse, who lives on Forres Way in Inverness, said a Wellington employee installed a SmartMeter on his second-unit cottage Tuesday before knocking on the door of his home. Morse said he asked the employee to remove the SmartMeter he had installed.

Morse said what bothers him the most about installation of the meters is his lack of choice. He also wants more information about their safety.

Sandizell said the "time-averaged" radiation levels emitted by the devices have been deemed safe by the Federal Communications Commission. She worries, however, because the meters emit energy in pulses, which she says are much higher than the radiation emitted by a cell phone.

Scott McMorrow, an Inverness resident who spent time Tuesday filming Wellington employees as they installed meters, said he is eager to see the results of a California Council on Science and Technology review of the issue, which is due out soon. Until then, McMorrow said he is urging his neighbors, even those who have no objections to the meters, to reject their installation.

Sandizell and nearly 100 of her members attended a Marin County Board of Supervisors meeting on Dec. 14 and asked supervisors to enact a county ban on SmartMeter installation. Supervisors promised to take the matter up when they meet on Jan. 4, she said. After that December meeting, Sandizell's group and other SmartMeter opponents blocked the entrance to a PG&E office in downtown San Rafael. The company closed the office for several hours.

Sandizell said she doubts PG&E wanted to arrest the protesters because of the bad publicity it would generate.

"It's not like a bunch of hippy activists," she said. "It's just normal people not feeling comfortable with the technology that's being imposed on them by an uncaring corporation."

Contact Richard Halstead via e-mail at rhalstead [at] marinij.com
http://www.mercurynews.com/ci_16960821?IAD...
Add a Comment
Support Independent Media
We are 100% volunteer and depend on your participation to sustain our efforts!